Last year a Gallery in Mayfair exhibited a selection of drawings and collages from the Cristiano Lovatelli Ravarino collection of works by Francis Bacon. It created quite a stir in the press, as the collection remains unauthenticated by the Bacon estate and rejected as fakes by the author of the new catalogue raisonné.

The works are said to have been made between 1977 and 1992 and given to Cristiano in Italy. They are described as in “temporary custody” of David Edwards, the brother of Bacon’s long-term lover, the late John Edwards, but are still owned by Ravarino. Last year, Gallery owner, Alice Herrick told the Art Newspaper that around 600 drawings were given to Ravarino, who was one of the artist’s lovers, from 1977 up until Bacon’s death in 1992. The author of the forthcoming catalogue raisonné of Bacon paintings, undertaken for the Francis Bacon Estate, has rejected the Ravarino works. In 2012 Martin Harrison told a Cambridge court that six drawings he had been shown were “pastiches, or even parodies, and profoundly disrespectful of Bacon’s authentic body of work”. To complicate matters, the works have subsequently been shown to a number of experts who have deemed the signatures correct and the court has been unable to prove that the body of work is wrong.

Now, St Stephen Walbrook is exhibiting Crucifixion drawings by Francis Bacon from “The Francis Bacon Collection of the drawings given to Cristiano Lovatelli Ravarino”. Between 1977 and 1992. It is understood, Francis Bacon donated the works to an intimate Italian friend. The collection contains a considerable number of drawings, pastels, and collages. Today these drawings are part of this collection which has previously been exhibited in Bologna, Dubrovnik, London, Madrid and Trieste among other locations.

The image of crucifixion was consistently utilised by Francis Bacon in his art to think about all life’s horror as he could not find a subject as valid to embrace all the nuances of human feelings and behaviours. This exhibition of crucifixion drawings by Bacon provides an opportunity to explore why the image of the crucified Christ retained its power for an avowed atheist such as Bacon and to reflect on the horror of the suffering that Christ endured for humanity.

Revd Jonathan Evens says: ‘Francis Bacon rather obsessively revisited religious imagery in his iconic paintings. The subject of the crucifixion preoccupied him throughout his life as he made at least eight major Crucifixion paintings, spanning five decades, including the work that launched his career, Three Studies for Figures at the Base of a Crucifixion. Bacon thought that this subject, more than any other, had the validity to embrace all the nuances of human feelings and behaviours that enable us to think about all life’s horror. Bacon’s basing of his godless images on an image freighted and weighted with salvific power highlights its enduring impact, even in the secular West and even in the work of an avowed atheist. The bleak obscuring of features in Bacon’s images of Christ reveals the emanation of love which leads Christ into nothingness. For all these reasons, Bacon’s crucifixion drawings deserve the interest of Christians, as well as that of art historians or art lovers, and reward informed reflection and contemplation.’

In his recollections of Francis Bacon, Cristiano Lovatelli Ravarino suggests that: ‘It is completely wrong to see Francis Bacon as a determined blasphemer and convinced atheist. As a matter of fact, and paradoxically, Francis was almost more fascinating in what he thought about religion than in what he actually painted. This man frequently described (first, by we journalists) like a merciless satanic drunkard was one of the most pitifully charitable people I ever met.’ He suggests that ‘Bacon was a gambler, but he was a gambler more in hiding himself from people than in actually playing roulette.’ 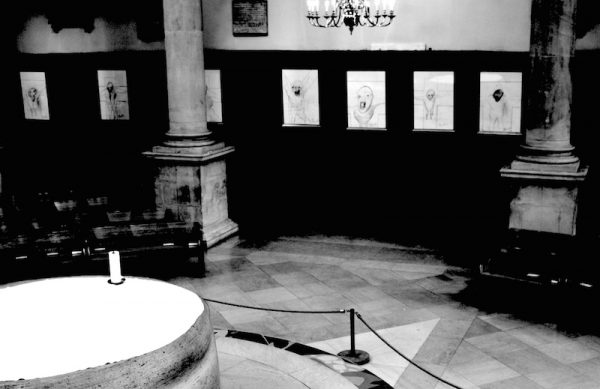 Controversial or not this exhibition is one not to miss! If the courts can’t decide on an outcome of authenticity, it is up to members of the public to assess this vast collection of works. We think whatever they are the works are rather nice!

London based public art collaborative Art Below will feature selected works from the exhibition in stations including Bond Street, Green Park and St. Paul’s from the 13th March for two weeks. www.artbelow.org.uk

Wednesday 29 March, 7.00pm: concert by Claudio Crismani  This will be amazing and full so book your tickets in advance