Cornelia Parker has been named as the official artist for the 2017 general election. This has been a tradition since 2001 when the portrait painter Jonathan Yeo created his work ‘Proportional Representation’ depicting party leaders Tony Blair, William Hague and Charles Kennedy by sizing them according to their share of the vote. The Turner-nominated Royal Academician is the first woman to take on the role. The Parliamentary Art Collection is a unique resource which documents and illustrates the history of Parliament. The official election artist is chosen by the Speaker’s Advisory Committee on Works of Art. Parker will be granted a commission of £17,000 ($22,000), plus travel expenses, for the project.

“We live in scary but exhilarating times. The whole world order seems to be changing” – Cornelia Parker

Parker, whose work often has a political edge created her own version of the Magna Carta which toured the UK celebrating the 800th anniversary the original document. The 13-metre artwork was inspired by the Wikipedia page rather than the historical document. The piece utilised embroidery, created by hundreds of volunteers including the whistleblower Edward Snowden, Jarvis Cocker, plus a number of politicians and social activists.

For some years Cornelia Parker’s work has been concerned with formalising things beyond our control, containing the volatile and making it into something that is quiet and contemplative like the ‘eye of the storm’. She is fascinated with processes in the world that mimic cartoon ‘deaths’ – steamrollering, shooting full of holes, falling from cliffs and explosions. Through a combination of visual and verbal allusions, her work triggers cultural metaphors and personal associations, which allow the viewer to witness the transformation of the most ordinary objects into something compelling and extraordinary. Ms Parker’s work has been displayed both nationally and internationally, including at the Tate Modern, the British Library and the Metropolitan Museum of Art in New York City. 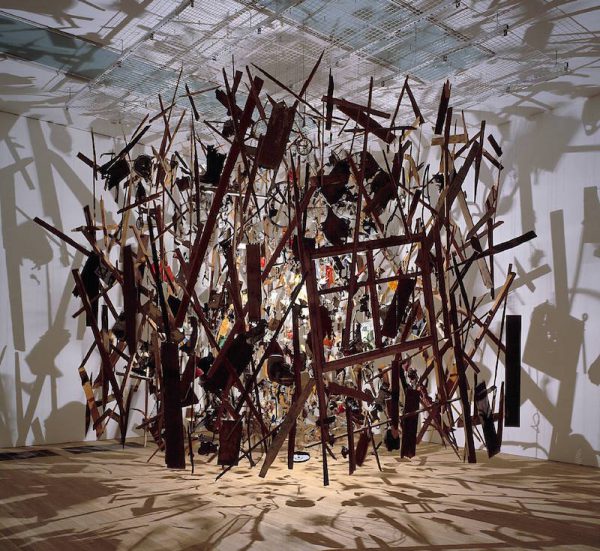 Alison McGovern, chair of the Speaker’s Advisory Committee on Works of Art, said she is “delighted” at Ms Parker’s selection. “She’s the first woman artist to take on this role and it’ll be really exciting to see how her ideas for this artwork develop over the campaign period,” Ms McGovern added.

Ms Parker stated, “As an artist, I feel honoured to have been invited to respond to such an important election. “With all its challenging issues and complexity, it is an event that I’m excited to engage with and I look forward to sharing my finished work.”

Parker’s artwork will be included in the parliamentary art collection following the election in June. She will post on Instagram throughout the election cycle under the hashtag #electionartist2017. She currently has an exhibition on at the Frith Street Gallery until 21 June