Visitors to the National Gallery are in for a treat as they will be able to view a new acquisition by one of the Renaissance’s most significant figures. Lucas Cranach the Elder (1472–1553)

Venus and Cupid (1529) painted in the early 16th century, will be displayed in Room 4 and is an essential addition to the National Gallery’s impressive collection of paintings by an artist widely regarded as a master of the German Renaissance. 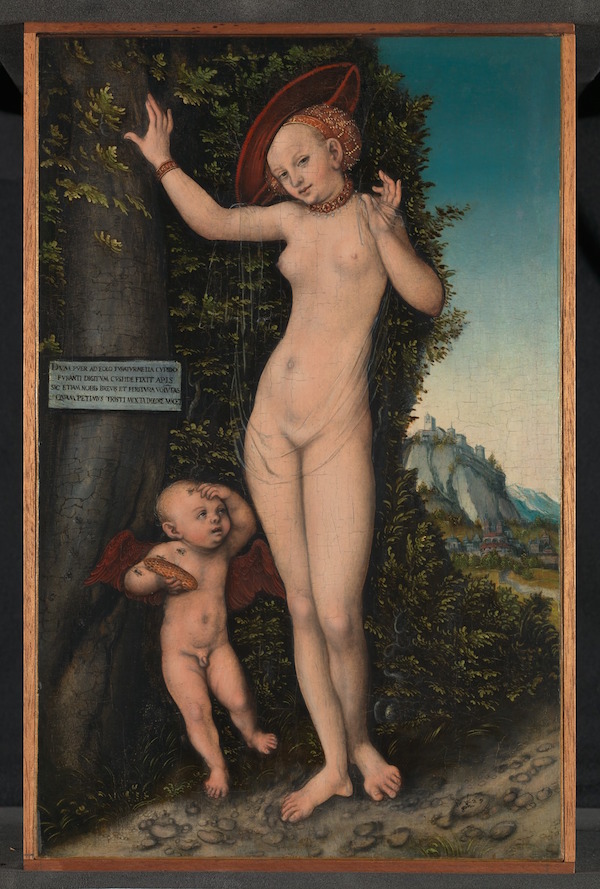 The painting has been generously gifted to the National Gallery from the Drue Heinz Charitable Trust following the death last year of Mrs Heinz, a committed and renowned patron of the arts in the United States and Britain.

The painting depicts two mythological figures and is one of a series that Cranach produced during the 1520s and 30s, including the National Gallery’s own Cupid complaining to Venus (about 1525). One of the characteristics that define Cranach’s career is his practice of producing a range of works based on similar subject matter. With this new acquisition, Gallery visitors will now be able to see the small variations made over time between two of Cranach’s Venus and Cupid works and understand how a much sought-after Renaissance artist organised his workshop to produce pictures on popular subjects.

The painting, in Cranach’s distinctive, mature style, depicts Venus unclothed, except for a transparent veil she holds in her left hand, alongside Cupid in a landscape setting. In a notable change from the National Gallery’s other version – which was most likely created first – the wings of Cupid are now red and match the broad-brimmed red velvet hat worn by Venus.

As court painter to successive Electors of Saxony, Cranach was working in Wittenberg, considered to be the centre of the Protestant Reformation which he embraced, and even painted several portraits of his friend Martin Luther. With this acquisition, visitors can continue to experience the effect this movement had on art, as the demand for overtly religious painting in parts of Europe decreased and instead gave rise to a focus on Classical mythology.

A plaque found on the tree in the painting, referencing a Greek poem, explains that Cupid, after stealing a honeycomb, has been stung by a bee. Offering the moral lesson that pleasure is brief but pain can be enduring, this would have been familiar to many at the time as the prominent Lutheran Philip Melanchthon – another friend of Cranach at Wittenberg – was producing Latin variants of the poem. Furthering the religious context, the headdress of Venus carries an inscription in German that reads ‘all is vanity’ – a reference to the book of Ecclesiastes in the Old Testament.

Curator of Early Netherlandish, German, and British Paintings Susan Foister said: “This exquisite small painting shows off Cranach’s characteristic combination of moral purpose with painterly delight in the representation of the female nude set in an idyllic landscape.”

The public are now able to view Venus and Cupid, which has only been on UK public display once since the 1950s, due to the legacy donation by Mrs Drue Heinz. The painting, which had previously been in the Cook Collection since at least 1915, was first acquired by the Heinz family in 1964, and it subsequently passed to Mrs Heinz who most generously chose to leave the painting to the nation.

National Gallery Director, Dr Gabriele Finaldi, said: “Venus and Cupid is a significant addition to the Gallery’s representation of Cranach, one of the most impressive and prolific painters of the Renaissance in Germany. We are grateful to Mrs Heinz and her charitable trust for this generous gift to the nation.”

Lucas Cranach the Elder (1472-1553) was one of the leading German painters and printmakers of the early 16th century. As court painter of the Elector of Saxony, the patron of Luther, Cranach is remembered as the chief artist of the Reformation. He painted altarpieces, Lutheran subject pictures and portraits, as well as mythological decorative works and nudes. Cranach was named after his native town of Kronach in Upper Franconia. He was probably trained there by his father, Hans. Around 1500 or earlier he travelled through Bavaria to Vienna, where he was briefly active. Early works exemplify the Danube school (see also Altdorfer) in their poetic use of landscape. In 1505 he entered the service of the Electors of Saxony at Wittenberg, becoming a town councillor there in 1519 and burgomaster in 1537 and 1540. In 1550 he was with the Elector John Frederick who was held prisoner in Augsburg. He retired in 1552 to Weimar, leaving his sons, Hans and Lucas the Younger, to carry on his workshop.