The Cruising Pavilion is set to go outside the tick box of heteronormativity when explores the contemporary architectural narratives related to LGBTQI cruising practices. Cruising generally describes the hunt for sexual encounters between homosexual men in public spaces such as parks, toilets, and parking lots or in dedicated locations such as gay bathhouses and sex clubs. The Cruising Pavilion not only considers cruising as an instrumental site of subversion of the heteronormative production of space itself but also as a highly unstable region that forces to rethink the core understanding of architecture.

The 2018 Venice Architecture Biennale, taking place later this month, showcases an Italian art collective highlighting the sexual potency of public spaces and the architecture with a “cruising pavilion.” Sponsored by the Spazio Punch gallery, the installation recalls the public toilets and dark spaces that have long been places of eroticism. These places, have been “relegated to the realm of depravity.”

Cruising usually describes the quest for sexual encounters between homosexual men in public spaces, but it cannot be reduced to neither men nor homos. This sexual practice generally takes place in public sites like parks, toilets, and parking lots, or in dedicated establishments like bathhouses and sex clubs. 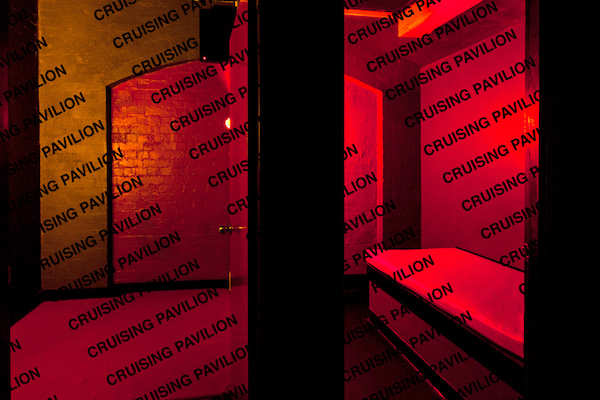 By featuring contributions from artists and architects, the Cruising Pavilion wishes to highlight the failure to consider Freespace as defined by this edition of the Venice Architecture Biennale, without questioning the hetero-normative production of space itself. Architecture is a sexual practice and cruising is one of the most crucial acts of dissidence.

The Cruising Pavilion is a project curated by Pierre-Alexandre Mateos, Rasmus Myrup, Octave Perrault and Charles Teyssou that will take place at Spazio Punch in Venice, Italy from the May 24 to July 1, during the 16th Venice Architecture Biennale. It is produced in collaboration with Spazio Punch. Since 2011, Spazio Punch is a non-profit Venetian organization on the Giudecca Island that promotes contemporary culture through events, exhibitions and talks.

The Cruising bar will be opened during exhibition hours.

Events:
–Opening: Thursday, May 24, 2-4pm
–Private tour of the “Garden of Eden” historical cruising ground on Giudecca: details and RSVP on cruisingpavilion [​at​] gmail.com

Venice Art and Architecture Biennales the Central Pavilion (Giardini) to the Arsenale throughout the months of May, June, and July