Perhaps I could warm up by recommending three shows I’m writing about for other places:

* Zavier Ellis’ latest choice of recent graduates, Young Gods, is also across two venues: CHARLIE SMITH in the East and the Griffin Gallery in the west (11 Jan – 16 Feb)

My strongest recommendation, though, could be to get to Kingston before 2 Feb – having said which, I admit you could wait for the Andy Holden shows lined up for Camden Arts Centre and Anita Zabludowicz in 2013… it’s going to be his year.

To 2 Feb:  www.stanleypickergallery.org
It’s not often that a show combines three substantial histories and manages to be funny to boot – I’d have guessed it was never, but Andy Holden achieves just that in Kingston Universty’s recently refurbished space. He covers cartoons, art, quantum physics and their post-Newtonian interconnections via found animations, eyes in space, dancing make-up, knitted sound sculptures and a vast digital collage which explains how the work obeys such ‘laws of motion in a cartoon landscape’ as ‘Anybody suspended in space will remain in space until made aware of its situation.’

To 15 Jan: www.reginagallery.com
Alexey Kallima gives us the familiar trope of paintings as consumer goods  turning out to be of consumer goods – in this case as displayed in the street kiosks typical of his native Moscow. So far, so familiar, but he mixes straight canvasses with wall paintings, and an installation of packaging  waste  presses up against the basement space’s ceiling as if striving to rejoin its contents above.  The painted stalls, animated by abstract aspects where one would have expected the photographic, do set the acquisitive urge in motion. Add Kallima’s history of building an audience response into his work, the narrative arc of commerce in Russia, and the art references smuggled in, and I liked it…

To 2 Feb: www.nettiehorn.com
Kim Rugg’s work brings a system-subverting media-savvy inter-connectedness to different techniques of wow-factor detail, whether that’s reorganising a newspaper into text-speak; reversing the map of Britain by degrees; posting letters with their stamps cut into Olympic rings; or using 49 van Gogh postcards to make a life-sized van Gogh. Don’t expect to sit too comfortably, though: the chair in question is covered in  news images of violent protest to emphasise, through the history recording medium of tapestry, how all-too-easily they fit into uninvolved lives. 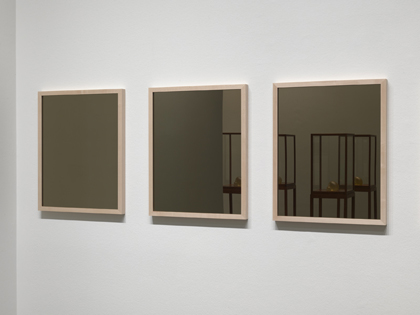 To 5 Feb: www.simonleegallery.com
Sherrie Levine, arguably the original radical subverter of originality, has been developing her reproductive methods of commodifying art for three decades. This century her seriality has tended towards luxury, and that’s the case here:  twelve elegant maple-framed mirrors lines the walls, accompanied by twelve pink glass skulls displayed in substantial glass and mahogany vitrines.  So the everyday viewer-inclusive reflection-as- art disguises its original source, meets the vanitas, and reinforces the potential for infinite reproduction. What elevates the whole is that the mirrors use bronze rather than silvering, connecting them to art traditions to peculiarly seductive effect – until we catch the skull beneath the flesh.

Both halves of this interesting double header feature, appropriately enough,  unusual ways of combining things. Downstairs several typically imaginative subversions from the  Romanian Ciprian Muresan include the jamming together of two theatrical companies acting different plays on the same stage so that the narratives and texts clash with chaotic and absurd effect.  Upstairs Heman Chong and Anthony Marcellini have each made or chosen 100 objects without conferring, then met up to group them across a bank of mirrored tables. Curious connections follow in line with stated methodological principles such as ‘objects can represent words or sentences in a conversation’.

To 25 Jan:  www.haunchofvenison.com
What, more paintings from photographs? Hold on, though, Greenfield-Saunders sources 50’s-60’s celluloid; absorbs, recolours and re-imagines her source by making a 7x 7 inch watercolour complete with such accidentals as burn, light leaks and strip-ends; and blows the effects up big in oils which use that same 7 x 7 to imply multiple small paintings in the big one. Result: highly eavesdroppable conversations between painting and analogue photography which liven up the potential endgames of both forms.
Keith Arnatt: Works 1967 – 1996 @ Maureen Paley, 21 Herald St – Bethnal Green
To 27 Jan: www.maureenpaley.com
Keith Arnatt (1930-2008) made his name with witty conceptual pieces such as ascendingly sized piles of salt which enact a self-engulfment and the burial of self and others as a means of focusing on the behaviour rather than appearance of a sculptural object. He then found a way to smuggle such approaches into superficially conventional photographs: gardeners match their gardens, dogs engage with the camera in a play on the gaze, waste takes on painterly qualities.  All this, plus the winning late photos of post-it notes left for him by his wife, are well represented here.
Porta Nigra @ Hidde Van Seggelen Gallery, 2 Michael Rd – Chelsea / World’s End
To 15 Feb: www.hiddevanseggelen.com
Black Gate: Mark Kremer’s choice of works with physical, psychological or conceptual blackness at their heart brings fifteen artists into atmospheric inter-relationships. Ansuya Blom’s short film captures  hauntingly mysterious preparations before a man goes out; Taf Hassam tells the story of a photograph of an empty gallery, printed on a scale which seems to extend the Van Seggelen space; Klaas Kloosterboer lays an unframed, sutured-and-repaired painting over a table too small for it, to sinister effect; the jesting adjunct to that’s an early Michael Stubbs (the shows ‘white elephant’) in which cream-squirts of paint sandwich together five canvases to hide who knows what darknesses within…
William Klein + Daido Moriyama – Tate Modern
To 20 Jan: www.tate.org.uk

These effectively contrasted yet linked shows give us Daido Moriyama (born Osaka, 1938) as the dark, war-clouded mirror of American culture in Japan, and in particular of Paris-based American William Klein (born New York, 1928). Both are best known for collections of black and white photographs of cities – but where Klein is extrovert, exuberant, humane, Moriyama is introvert, alienated, nihilistic – and pushes further to explore the formal limits of the photograph as an analogue for troubled states of mind and culture. Even his cherry blossom looks beautifully disturbed.

I wasn’t the biggest fan of the mask paintings through which Beiijing-based Zeng Fanzhi found fame, even if one has fetched over £6m at  auction. But I like the psychological landscapes in which tangled forest growth becomes entangled in turn with an over-layer of echoic abstract marks. Here Zeng ups the scale; adds splashier leaf-like cover-marks to his repertoire; and applies the thicketing technique to vastly blown up versions of Durer drawings, the better to emphasise how the whole series may after all come back to masking, to one culture or time seen through another as if throug ha world wide web…