The Cy Twombly foundation has rejected the Louvre’s justification for redesigning the Bronze Gallery space without consultation. The ceiling, one of the artist’s last and largest works is a permanent installation at the museum. The Foundation will now proceed with a lawsuit against the world’s most popular museum. It has accused the Louvre of compromising the original agreement set forth with Twombly and his Foundation.

Last month the Twombly Foundation expressed dismay that the Louvre redecorated the room, a neutral off white with a worn limestone floor. Replacing it with dark rust walls and wood parquet flooring. Many people feel that it is unsuitable and clashes with the ceiling designed by Mr Twombly.

Sir Nicholas Serota, the former director of the Tate and a current member of the Twombly Foundation board, told the Telegraph last week. “For Twombly,” he said, “the room was a whole.” “If this is not an ‘affront’ to one of the great painters of the twentieth century, I don’t know what would be.” 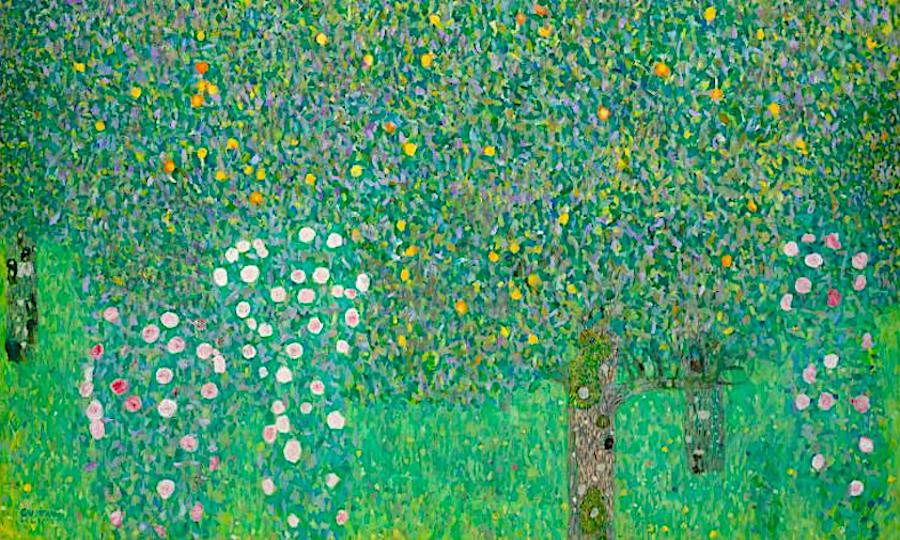 Klimt Rosebushes Under the Trees 1905

Klimt Painting To Be Returned To Heirs Of Family

A painting by the Austrian Secessionist artist Gustav Klimt, in the collection of the Musée d’Orsay in Paris, is to be reunited with heirs of a family who were forced to sell it under duress by the Nazis, 80 years ago.

Nora Stiasny was part of a prominent Austrian Jewish family who sold Rosebushes Under the Trees (1905) to artist Philipp Häusler for 400 Marks, 1/10th the artwork’s value to make ends meet after the Nazis annexed Austria in 1938. The French culture minister Roselyne Bachelot said, ‘Restoring it to its rightful owners was an acknowledgement of the crimes they suffered. She said the painting bore witness to the “broken lives” of the Nazi era. The French state bought the work, its only Klimt, in 1980 without realising its history’.

In 1942 Ms Stiasny was deported to a concentration camp in Nazi-occupied Poland and died the same year. The artist/dealer held on to the masterpiece until he died in the 1960s. France bought it at auction in 1980 for the Musée d’Orsay.

“Today, we know that it is indeed a work that was looted in Austria in August 1938,” Ms Bachelot told reporters.

“The decision we’ve taken is, of course, a difficult one. It results in taking a masterpiece out of the national collections, which is the only painting by Gustav Klimt which France owned. “But this decision is necessary, essential. Eighty-three years after the forced sale of this painting by Nora Stiasny, this is the accomplishment of an act of justice.” 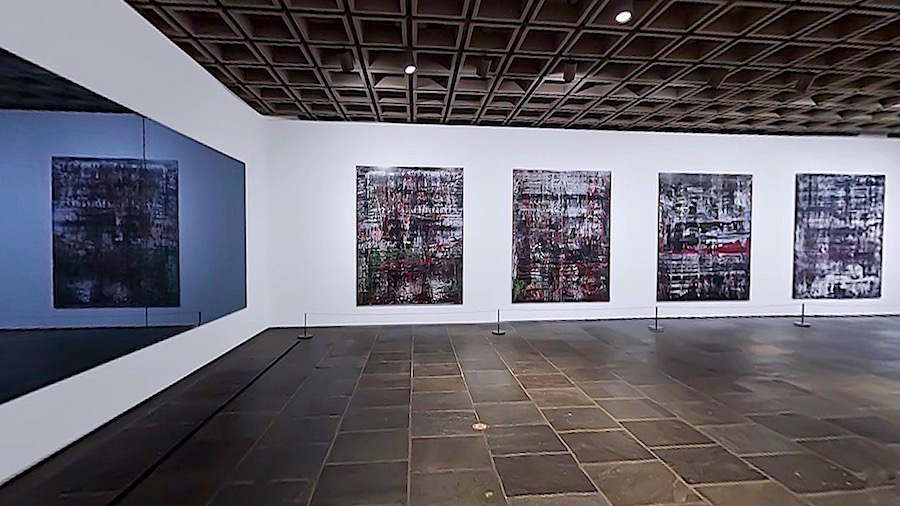 Gerhard Richter, one of the most influential artists today, has agreed to lend the National Gallery of the State Museums of Berlin an extensive collection of more than 100 works for the “Museum of the 20th Century” Kulturforum, Berlin.

A contract between the Gerhard Richter Foundation and the Prussian Cultural Heritage Foundation has been agreed upon. The central works of the long-term loan are the four-part cycle, a monument to the Holocaust, which will be shown in the Alte Nationalgalerie from 16 March to 3 October 2021 under the title “Reflections on Painting”. The show is supported by the Board of Trustees of Prussian Cultural Heritage.

Gerhard Richter says: “The reason for founding a foundation was the four Birkenau paintings that I did not want to bring to the art market. The decision cleared the way for a foundation that now comprises more than 100 works. I am delighted that the pictures are coming to Berlin.”

The four paintings “Birkenau” are based on four photographs, which were secretly taken in 1944 by an inmate in the Auschwitz-Birkenau extermination camp. Gerhard Richter painted the photographs on four canvases. When that didn’t work, he began to paint it over. The resulting abstract images thus move in a space between pointing and non-showing, of documenting and remembering.

The works have already been seen in various exhibitions in Dresden, Prague, Moscow and New York. The four Birkenau pictures and the four photo templates are juxtaposed with a four-part mirror that raises further reflection questions. Ralph Gleis curated the hall in the Old National Gallery in coordination with the artist. The complexity of the depiction and representation called upon by this cycle touches on painting’s fundamental questions, as they have occupied people overall times. This is precisely why Gerhard Richter wanted the Alte Nationalgalerie location for the presentation of the “Birkenau” cycle.

The presentation of the “Birkenau” pictures is the prelude to long-term cooperation between the GERHARD RICHTER KUNSTSTIFTUNG and the National Gallery of the State Museums of Berlin. The GERHARD RICHTER KUNSTSTIFTUNG provides the museum with more than 100 works from various creative phases by the German artist: from individual works such as “Besetztes Haus” (1989) to important glass and mirror works such as “Spiegel, gray” (1991) or “6 standing discs” (2002/2011) up to serially laid-out series of paintings in the late work such as “4.900 Farben” (2007), “Strip” (2013) or a series of abstract paintings from recent years.

In 2023, substantial parts of the Gerhard Richter collection will initially be exhibited in the Neue Nationalgalerie. The works’ actual destination is the new building at the Kulturforum, the “Museum of the 20th Century”. For this purpose, a room is provided upstairs. The focus will be on the cycle “Birkenau”, which will be permanently visible due to its great significance and eminent importance for Germany’s history. The handling of Gerhard Richter’s art in the new building should remain open to the present’s discourses. For example, the National Gallery will regularly develop changing presentations for this space to allow new perspectives on Gerhard Richter’s work. Contemporary interactions with Gerhard Richter’s work are also conceivable and also desired by the artist.

The GERHARD RICHTER KUNSTSTIFTUNG was founded in 2020 by Gerhard Richter to make his work permanently available to large public institutions. In addition to the National Gallery of the State Museums of Berlin, the Dresden State Art Collections also receive works from this Foundation. The Foundation’s list of works is listed in the publication “Gerhard Richter-Kunststiftung” (Cologne, 2021).