Speculation is rife following the $450.3m sale of Leonardo da Vinci’s ‘Salvatore Mundi’. The painting, sold at Christie’s New York salesroom this week has become the most expensive work of art sold at auction to date. This newsworthy event has prompted a worldwide search to find out who actually bought this controversial depiction of Christ holding a crystal orb.

Very few top echelon collectors have the buying power to purchase a painting valued at almost half a billion dollars.

There has been some talk that the painting was bought by hedge-fund billionaire Ken Griffin, who is best known for his purchase of major de Kooning and Jackson Pollock works. He spent over $500 million in the last few years and had loaned the modern masterworks to the Art Institute of Chicago. Griffin. Sources in the art world say the da Vinci was not to his taste.

Which brings us to Wal-Mart heiress Alice Walton the founder of the Crystal Bridges Museum of American Art in Arkansas. Thinking about it Da Vinci wouldn’t fit into the collection, so this rules her out.

Other thoughts have speculated billionaire Liu Yiqian, the Chinese collector who acquired a major Modigliani for $170 million in 2015. He has it on permanent display at the Long Museum which he privately owns in Shanghai. Liu announced on WeChat that he wasn’t the buyer. “Congratulations to the buyer. Feeling kind of defeated right now.” 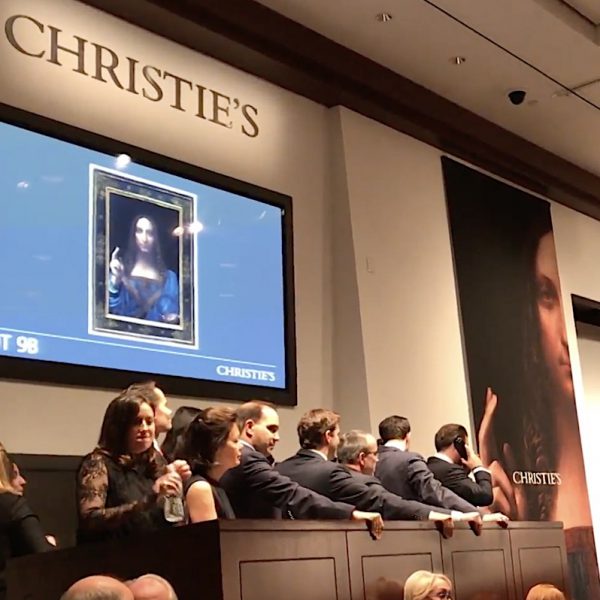 It is unlikely that either the Abu Dhabi or Qatari royal families would spend $450.3m on a depiction of Christ. It could cause a revolution, despite the Al Nahyan Abu Dhabi Royal family recently opening the first outpost of the Louvre in the Middle East

Last but not least. The Getty Museum is still a possibility not to rule out. Others have named Jeff Bezos or Bill Gates as contenders. Bezos recently sold $1 billion worth of Amazon stock
Hope he paid his taxes first.

The work was sold to the Russian billionaire Dmitry Rybolovlev who purchased the da Vinci painting for $127.5 million in 2013. He sued the vendor who brokered the deal for overcharging him and now he has just sold it for $450.3 million. Despite selling the ‘Salvator Mundi’ painting for a world record price Rybolovlev has not withdrawn his lawsuit against Swiss art dealer Yves Bouvier. Hummm! That’s art biz…

2011, saw the dramatic public unveiling of Salvator Mundi (‘Savior of the World’) in the exhibition Leonardo da Vinci: Painter at the Court of Milan, at The National Gallery, London.  The painting caused a worldwide media sensation, not always for the right reasons. The painting’s authenticity is still widely questioned by many experts, while the issue of overpainting, restoration and conservation will always be an underlying issue.