I think it’s hilarious that Kenny Schachter’s ‘April-fool-style’ reporting of Da Vinci’s Salvator Mundi hiding aboard Saudi Prince MBS’s yacht (as reported in ArtNet News) has been picked up by the wire services. I find it equally funny that what started as a quip is being reported in Bloomberg, The Guardian and Telegraph as fact. Talk about FAKE News!

The painting is perhaps the art world’s most significant mistake

The painting has previously been recorded as being in storage in Switzerland and has also sparked questions as to whether it is still sitting at Christie’s NY, unpaid and overdue. 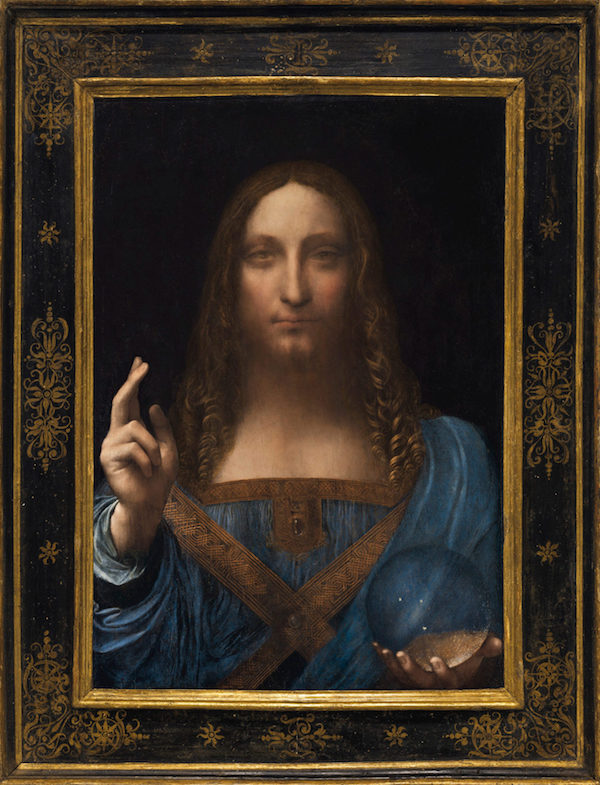 All Aboard! Salvator Mundi and the Saudi Prince’s Yacht

Mr Schachter, an art dealer by trade, has attempted to re-brand himself as London’s answer to the Pulitzer Prize-winning New York Magazine critic Jerry Saltz. He knows there’s no evidence that the painting is in the hostile environs of a sea vessel, just speculation, and hearsay.

The 500-year-old wood panel is prone to warping. It has previously snapped into as many as five pieces before undergoing a modern restoration which has made Christ’s face go blurry. In fact, when I first saw the Salvator Mundi in the National Gallery’s Da Vinci show a few years back, it appeared out of focus. When I reached for my spectacles, it was still blurry. I would be interested in finding an insurance trail for the painting. Clearly, no insurance company would cover the most expensive picture in the world on The Serene, (pictured above) a Yacht presently in the Suez Canal.

Schachter said, The painting would remain onboard the large yacht until it is relocated to the Al-Ula governorate, which Saudi Arabia is aiming to transform into a culture and tourism destination.

Following the painting’s successful marketing campaign, which saw the Salvator Mundi sold in a Contemporary Art evening sale at Christie’s in November 2017, for the princely sum of $450m, the painting has come under close scrutiny by the academic community. The Crown Prince often referred to by his initials MBS, used an intermediary to buy the painting depicting Christ holding a crystal orb. The panel which was to be on long term loan to the Louvre Abu Dhabi has never appeared. Abu Dhabi has declined to comment, directing questions to the emirate’s Department of Culture and Tourism.

One theory has been that the painting on a delicate wood panel was damaged. Another, that the Prince hasn’t paid in total for the work of art. The third rumour and yes this is unconfirmed has been that the Louvre is not willing to attribute the painting to Da Vinci and will only state that the picture is from the ‘workshop’ of Da Vinci. This is a severe blow, if true, it knocks about $448m off of the value of the painting.

If this painting is in fact by Da Vinci, the Salvator Mundi is one of fewer than 20 surviving paintings by the Renaissance Master. In any event, this is the highest price ever paid for a work of art at Christie’s or Sotheby’s

Academics who supported the attribution included Leonardo expert Martin Kemp, Emeritus Professor of History of Art at Trinity College, Oxford, who according to the Guardian, told an audience at the Cheltenham literature festival last October that the reasons as to why the painting had yet to be exhibited since the auction was not due to doubts about the attribution.

Abu Dhabi opened its branch of the Louvre brand on 8th November 2017. French President Emmanuel Macron, who described the new museum as a “bridge between civilisations.” attended and officiated at the event. The Paris Louvre has exchanged expertise, works of art and exhibition curation in return for a billion euros ($1.16 billion). Over 60

Top Photo: Yes this is the actual main lounge area of the Yacht Serena. The Salvator Mundi has been photoshopped in by us!