Elizabeth Blackadder RA, RSA  one of Scotland’s greatest artists, has died, age 89. She was born in Falkirk in 1931 and studied at ECA from 1949 until 1954 under Robert Henderson Blyth and William Gillies, among others. She earned a travelling scholarship to southern Europe and Italy, which greatly influenced her work.

In 1956 she married artist and fellow Scottish Gallery exhibitor John Houston and began teaching in Edinburgh. Elizabeth gained recognition and success in London. Her work can be seen at the Tate Gallery, the Scottish National Gallery of Modern Art, and the Museum of Modern Art in New York and it has appeared on a series of Royal Mail stamps. 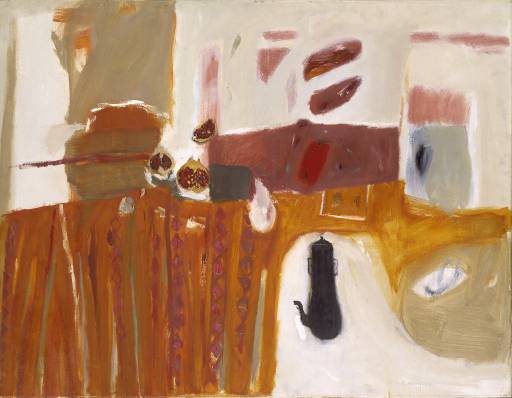 Elizabeth is perhaps best known for her detailed yet lyrical watercolours of flowers, ‘table-top compositions using oriental objects and her beloved cats. Trips to Japan and Venice inspired her work with a greater emphasis on oils which can be seen in landscapes and townscapes of this period. An important series of still life paintings using decorated tins and boxes arranged with exotic fish, fruit, and vegetables was some of her best work. She also painted landscapes and portraits in both oils and watercolour but using the latter most frequently as it was well suited to conveying her sensitive brushwork. Regular trips abroad, particularly to the east, helped stimulate her interest in colour and pattern.

Blackadder could never be described as an ‘abstract artist’, but gained much from her understanding of non-figurative art which was popular in Europe and America in the late 1950s and 1960s. In 1965 Blackadder was looking at new ways of approaching the still life, taking her cue from Redpath and the Edinburgh School but bringing to this her own unique vision which drew on sources as diverse as Mughal miniatures and colour-field abstraction.

Her first solo exhibition was in Edinburgh in 1959, and she lectured at Edinburgh College of Art for more than two decades. Guy Peploe, a director at the Scottish Gallery, said: “Elizabeth was without question one of our greatest artists, as well-known in London as Scotland. “She was critical to the gallery with an exhibition history of over 60 years and will be hugely missed by all who knew her.”

She was the first woman to be elected to both the Royal Scottish Academy and the Royal Academy, London. During her 60-year career, she won numerous awards for her work and in 2001 was appointed Her Majesty’s Painter and Limner in Scotland.