Damien Hirst the Turner Prize-winning former YBA has unveiled a sample of his evolving painting style, and it’s not Bacon inspired like his skull series nor is it exotic like his ‘Parrot’ paintings. The new works hark back to his original ‘Spot’ canvases painted in the 1980s. They have magnified and gone off his normal grid, adapting a Pointillist approach reminiscent of Bonnard.

“I went to see a show at the Pompidou in Paris of de Kooning and Bonnard when I was a student, and both artists blew me away. These paintings I’ve made, which I’m calling the Veil paintings, will be shown at Gagosian LA in March.”

Hirst added, “They’re like big abstract Bonnard paintings, I’ve been playing with the scale, and the big ones feel perfect. How can you not love colour? Sunlight on flowers, fuck everything else” The texture of these paintings reminds me of some sweets I used to get from my gran as a kid, they were in a bag like crisps and were a dollop of brightly coloured icing sugar squeezed from an icing bag on a small round tasteless biscuit base – anyone remembers what they were called? There were loads in a bag of many different colours.”

“The surface of these paintings is like that joy division album cover that Peter Saville did if you look close the paint is like mountains and valleys on an insane coloured planet.” 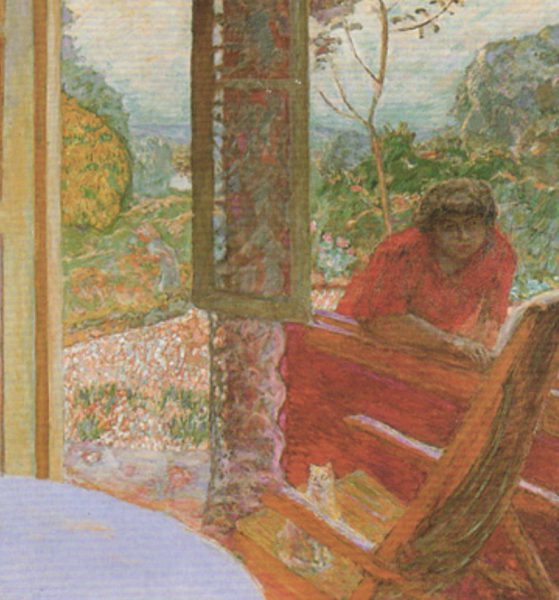 Detail The Dining Room in the Country by Pierre Bonnard 1913

Bonnard was a French painter and printmaker, as well as a founding member of the Post-Impressionist group of avant-garde painters Les Nabis. Bonnard preferred to work from memory, using drawings as a reference, and his paintings are often characterized by a dreamlike quality. The intimate domestic scenes, for which he is perhaps best known, often include his wife, Marthe de Meligny.

Bonnard has been described as “the most thoroughly idiosyncratic of all the great twentieth-century painters”, and the unusual vantage points of his compositions rely less on traditional modes of pictorial structure than voluptuous colour, poetic allusions and visual wit. Identified as a late practitioner of Impressionism in the early 20th century, he has since been recognized for his unique use of colour and his complex imagery. “It’s not just the colours that radiate in a Bonnard”, writes Roberta Smith, “there’s also the heat of mixed emotions, rubbed into smoothness, shrouded in chromatic veils and intensified by unexpected spatial conundrums and by elusive, uneasy figures.”

Damien Hirst was born in 1965 in Bristol and grew up in Leeds. He studied Fine Art at Goldsmiths college from 1986 to 1989, and whilst in his second year, he conceived and curated the group exhibition, ‘Freeze’. The show is commonly acknowledged to have been the launching point not only for Hirst, but for a generation of British artists.

Since the late 1980s, Hirst has used a varied practice of installation, sculpture, painting and drawing to explore the complex relationships between art, beauty, religion, science, life and death. Through work that includes the iconic shark in formaldehyde, The Physical Impossibility of Death in the Mind of Someone Living (1991) and For the Love of God (2007), a platinum cast of a skull set with 8,601 flawless pavé-set diamonds, he investigates and challenges contemporary belief systems, and dissects the uncertainties at the heart of human experience. In April 2017, he presented his most complex project to date, ‘Treasures from the Wreck of the Unbelievable’, across two museum spaces in Venice. Hirst lives and works in London and Gloucester.
Visit Here