Damien Hirst and HENI will collaborate to present a unique exhibition of paintings from his first NFT collection, The Currency, at Newport Street Gallery in London, opening on 9 September 2022. The Currency is a collection of 10,000 NFTs corresponding to 10,000 unique physical artworks created by the artist.

Collectors were given a choice: to keep the NFT or exchange it for the physical artwork. They then had one year, concluding 27 July 2022, to decide. The physical painting will be destroyed if they have not exchanged their NFT during that period. Similarly, if they chose to trade it in that period, the NFT was destroyed.

The destruction of the artworks will take place during The Currency exhibition. Paintings will be burnt at a specified time each day during the show’s run. These timings will be publicised in advance.

During Frieze week, in October 2022, there will be a major closing event in the gallery during which the remaining artworks will be burnt. Damien Hirst will attend the burning event.

The Currency Chronicles, a publication outlining the community experiences of the project’s first phase, will be launched during the exhibition.

The physical artworks were created by hand in 2016 using enamel paint on handmade paper. Each artwork is numbered, titled, stamped, and signed by the artist on the back. Additional authenticity features on the artwork include a watermark, a microdot and a hologram containing a portrait of the artist. On each artwork, no colour is repeated twice. The titles were generated through the application of machine learning to some of the artist’s favourite song lyrics.

Damien Hirst views The Currency as a work of art in which people participate by buying, holding, selling and exchanging the artworks. 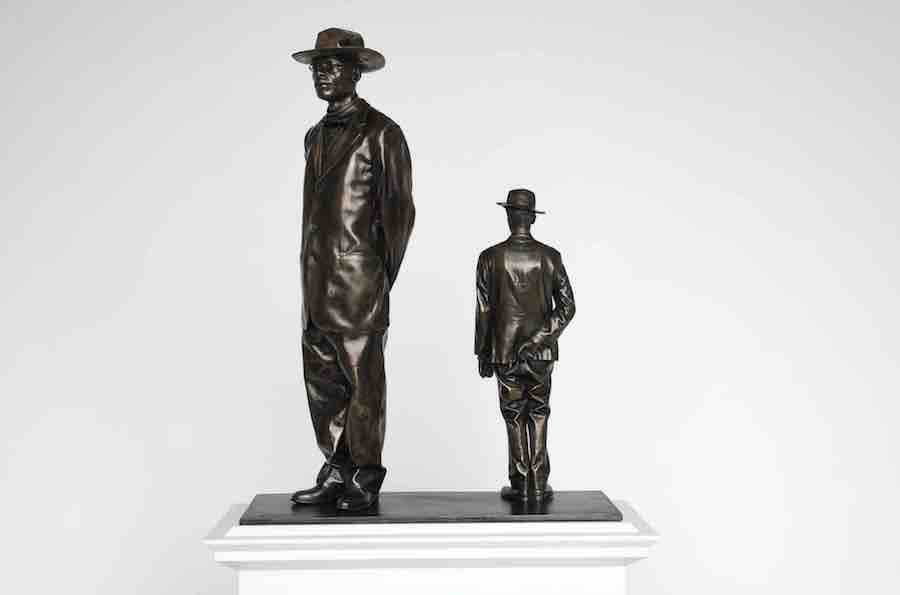 Antelope by Samson Kambalu will be unveiled on the Fourth Plinth in London’s Trafalgar Square on 14 September 2022. It will be the 14th Fourth Plinth commission since the programme began in 1998 and follows THE END by Heather Phillipson, which will be on the plinth until 15 August 2022.

The Fourth Plinth is funded by the Mayor of London with support from Arts Council England and Bloomberg Philanthropies.

Antelope was selected in 2021 by the Fourth Plinth Commission Group following an exhibition at the National Gallery, where nearly 17,500 people commented on the selection.

The sculpture restages a photograph of a Baptist preacher and pan-Africanist John Chilembwe and European missionary John Chorley as a sculpture. The photograph was taken in 1914 at the opening of Chilembwe’s new church in Nyasaland, now Malawi. Chilembwe is wearing a hat, defying the colonial rule that forbade Africans from wearing hats in front of white people. A year later, he led an uprising against colonial rule. As a result, Chilembwe was killed and his church, which had taken years to build, was destroyed by the colonial police. In Kambalu’s work, Chilembwe will be almost twice the size of Chorley. By increasing his scale, the artist elevates Chilembwe and his story, revealing the hidden narratives of underrepresented peoples in the history of the British Empire in Africa and beyond.

Coinciding with the unveiling of Antelope, an updated version of Kambalu’s memoir The Jive Talker: Or, How to get a British Passport will be released in paperback by September Publishing. Kambalu tells the story of how a little boy obsessed with fashion, football, Nietzsche and Michael Jackson won a free education at the Kamuzu Academy (‘The Eton of Africa’) and began his long journey to art school and international artistic and academic success. The new edition includes a new 5000-word introduction by the artist that includes being chosen for the Fourth Plinth.

Samson Kambalu said: “Antelope on the Fourth Plinth was ever going to be a litmus test for how much I belong to British society as an African and a cosmopolitan. So this commission fills me with excitement and joy.”

Justine Simons OBE, Deputy Mayor for Culture and the Creative Industries, said: “I can’t wait to see Samson Kambalu’s sculpture unveiled on the world-renowned Fourth Plinth in September. His work shines a light on a hidden narrative of the British Empire and will reveal how a simple hat became a symbol of the fight for equality. Heather Phillipson’s THE END has shown the power of the Fourth Plinth to spark conversation, and I’d urge anyone who hasn’t seen her sculpture to take a chance to enjoy it before 15 August.”

Antelope will replace Heather Phillipson’s THE END on the Fourth Plinth. Phillipson’s vast physical and digital sculpture with a giant swirl of whipped cream, a cherry, a fly and a drone that transmits a live feed will be available until 15 August.

The Fourth Plinth is known across the globe for bringing world-class contemporary art to London’s most prominent historic public square. It has showcased the work of great artists who have not shied away from tackling the day’s critical issues for two decades. For example, Yinka Shonibare CBE considered the legacy of British colonialism in Nelson’s Ship in a Bottle, Katharina Fritsch commented on gender equality and the masculine posturing in the square with her work Hahn/Cock and Michael Rakowitz’s recreation of the Lamassu, a winged bull and protective deity that was destroyed in Nineveh (near modern-day Mosul) in 2015 shone a light on the devastating impact of war on cultural heritage. 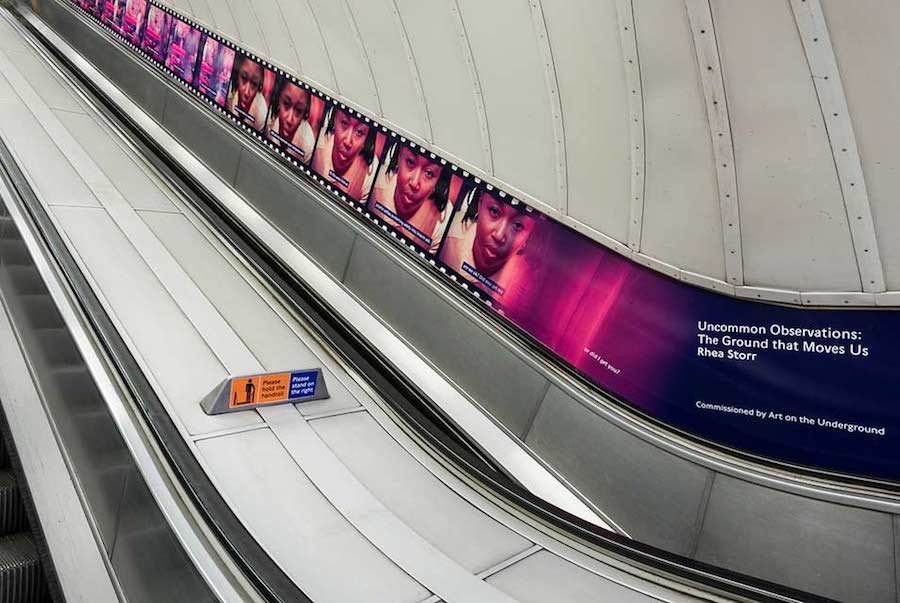 Rhea Storr, ‘Uncommon Observations: The Ground that Moves Us’, 2022. Heathrow Terminal 4 station. Commissioned by Art on the Underground. Courtesy of the artist. Photo: Thierry Bal

Central to Rhea Storr’s photographic and film work is her writing and research around the production and circulation of images of Black subjects. This research asks how an image sharing knowledge can? How might it be a call to come together as a community? How can an image challenge or confront its audience? Can it be a projection of joy and liberation?

The photoshoot played with who is looking at who is visible and who is in control of the image capture. The movements documented in the images shift between being directed, playful and liberatory. Concerned with the readability of images, particularly those of Black and mixed-race women, Storr’s Art on the Underground commission extends this and proposes that bodies, specifically Black bodies, are not fixed but constantly moving from being observed and admired to moving to evade or refuse to monitor.

Running parallel to the photoshoot, Storr conducted a series of research conversations with London Underground station staff to understand their work in stations further. These conversations focussed on their movement and visibility in stations, asking what they noticed about people? What aspects of travelling are hidden? How does race, visibility or dress affect how they or the people they observe move around the Underground? These conversations informed the artist’s writing process, producing captions for the images. Written in the artist’s voice, the captions with the images read like stills from a film. As viewers move past these static photographs in stations, along passageways, escalators and through ticket halls, they will experience the artworks as if in motion, catching sequences of Storr’s words and photographs almost as moving images and messages.

Exhibiting these works in public space is key to how we receive their meaning. We encounter these images between information notices, advertising, images for consumption and direction, where our movements are choreographed by the station’s design. This artwork asks if it can re-narrate or revise our experiences as passengers, public members, workers, communities, and individuals in constant movement and under observation.

Rhea Storr said: “These photographs consider the values, power dynamics and aesthetics we employ when photographing each other. I wanted to think about how being a Black subject in the world shapes how we represent ourselves in photographs. Images are not benign or abstract; they are the product of our circumstances. The history of the photograph is intertwined with work and the industrial revolution, of which the railways played a huge part. Talking to TfL staff about their observations offered many different perspectives, which I felt the need to protect in the final texts- to observe and listen to their stories rather than surveil. I was excited to have the opportunity to work on a colour infrared film which produces this vibrant pink hue. I’ll never be able to work in such a considered way on colour infrared film again because the film is obsolete. The film has shaped what is said here. It was important to me to use this military film which has been used as an instrument of violence and otherness, to think critically about visibility and control, particularly when we think about the representation of the Black subject.”

Rhea Storr is an artist/filmmaker who explores the representation of Black cultures and her British-Bahamian heritage. She has a continued engagement with the politics of carnival, often focusing on the performance of women from the Caribbean and its diaspora. Masquerade as a site of protest is an ongoing theme in her work. She is interested in spaces where Black cultures are performed, particularly in rural or contested areas. Rhea Storr often works with photochemical film, and her research revolves around Black British Aesthetics and analogue filmmaking practices. She is heavily involved in not nowhere, an artists’ film co-operative focusing on analogue film. She is the winner of the Aesthetica Art Prize 2020 and the inaugural Louis Le Prince Experimental Film Prize.