Damien Hirst’s has released a mocumentary film on Netflix following the storyline of his Disney-like exhibition titled “Treasures from the Wreck of the Unbelievable,” which opened to the public on April 9th, 2017, during the 57th Venice Biennale.

The exhibition focused on a fictitious ship wreck which happened some 2,000 years ago off the coast of East Africa. The spoils, so the tale continues was apparently owned by a freed Turkish slave, collector named Cif Amotan II. The boat’s cargo contained a massive art collection from all corners of the known world. It was on its way to an island museum where it would be housed. The ship sank in rough waters and remained untouched until 2008 when a salvage crew allegedly made the discovery. Within the wreckage bronze statues, marble busts, urns, vessels, jewellery, and coins were brought to the surface.

The science museum-like displays exhibited both large format photos and videos to back up the tale.  All of the artefacts were in Damien’s unique style so there is no question that the showmanship on display is a bit of a tall tale. Most of the larger sculpture was made from fibreglass or resin and patinated to look like bronze. 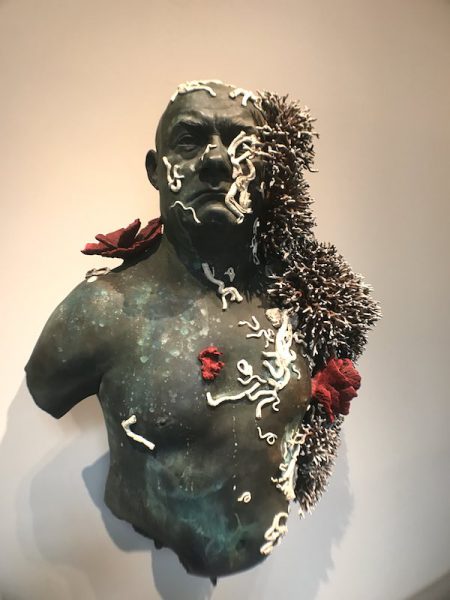 The show marked the first time in the museums’ history that the two Venetian venues belonging to the Pinault Collection were dedicated to a single artist. This was an exhibition about bling and Mr Hirst along with his mentor Jeff Koons are the current kings of bling. This body of work is not so far from the neo-classical statuary that Mr Koons has been producing over the last few years. Only the patina seems to be different. It also reminds me rather closely of Marc Quinn’s latest work recently displayed at the wonderful Sir John Soane’s Museum in London.  Apparently, Mr Hirst invested £50m of his own money in the exhibition. This hybrid installation entertained and was packed out for the duration of the show.

This was the first major solo exhibition dedicated to Damien Hirst in Italy since the 2004 retrospective in Italy at the Museo Archeologico Nazionale in Naples. The exhibition was curated by Elena Geuna, curator of the monographic shows dedicated to Rudolf Stingel (2013) and Sigmar Polke (2016) presented at Palazzo Grassi. Damien Hirst’s latest project has been ten years in the making. The Venice exhibition highlights the longstanding relationship shared by the artist and the Pinault Collection. A key artist for the Collection, Damien Hirst’s work has previously been exhibited at Palazzo Grassi, where it featured in the Palazzo’s 2006 inaugural exhibition “Where Are We Going?”. This group exhibition derived its title from the British artist’s steel and glass skeleton cabinet, Where Are We Going? Where Do We Come From? Is There a Reason? (2000–2004). Damien Hirst also featured in “A Post-Pop selection” in 2007. In addition, the artist has appeared in major exhibitions of the Pinault Collection at the Conciergerie in Paris in 2013 (“A Triple Tour”), and at the Grimaldi Forum in Monaco in 2014 (“Art Lovers”). The 2017 exhibition is part of a calendar of monographic shows dedicated by Palazzo Grassi to major contemporary artists – Urs Fischer (2012), Rudolf Stingel (2013), Martial Raysse (2015) and Sigmar Polke (2016) – alternating with thematic exhibitions of works from the Pinault Collection. 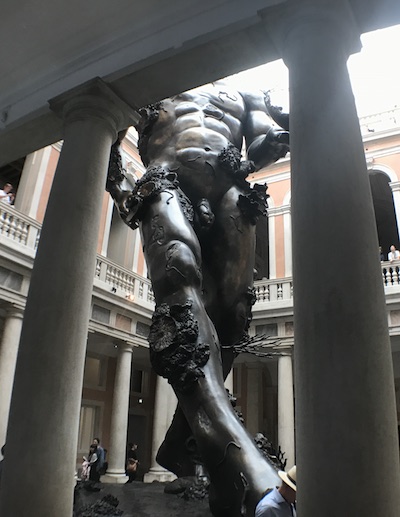 Damien Hirst from Treasures from the Wreck of the Unbelievable

Damien Hirst was born in 1965 in Bristol and grew up in Leeds. He studied Fine Art at Goldsmiths college from 1986 to 1989, and whilst in his second year, he conceived and curated the group exhibition, ‘Freeze’. The show is commonly acknowledged to have been the launching point not only for Hirst but for a generation of British artists. Since the late 1980s, Hirst has used a varied practice of installation, sculpture, painting and drawing to explore the complex relationships between art, beauty, religion, science, life and death. Through work that includes the iconic shark in formaldehyde, The Physical Impossibility of Death in the Mind of Someone Living (1991) and For the Love of God (2007), a platinum cast of a skull set with 8,601 flawless pavé-set diamonds, he investigates and challenges contemporary belief systems, and dissects the uncertainties at the heart of human experience. Hirst lives and works in London and Gloucester. Since 1987, over 90 solo Damien Hirst exhibitions have taken place worldwide, and he has been included in over 300 group shows. In 2012, Tate Modern, London presented a major retrospective survey of Hirst’s work in conjunction with the 2012 Cultural Olympiad. Hirst’s other solo exhibitions include Qatar Museums Authority, ALRIWAQ Doha (2013-2014); Palazzo Vecchio, Florence (2010); Oceanographic Museum, Monaco (2010); Rijksmuseum, Amsterdam (2008); Astrup Fearnley Museet fur Moderne Kunst, Oslo (2005); Museo Archeologico Nazionale, Naples (2004), amongst others. He was awarded the Turner Prize in 1995.