The Oscar-winning Director Danny Boyle has joined with the anonymous Street Artist Banksy to produce an alternative nativity play at the artist’s Walled Off Hotel in the occupied West Bank.

Banksy calls it “the least Christmassy place on earth”

The trailer of the video which has been posted on the hotel’s Facebook page depicts Palestinian children singing Jingle Bells with fake snow falling but more is to be revealed this weekend. The BBC who sponsored the documentary said the programme would show “a challenging and provocative” version of the story. They added, the Oscar-winning film-maker accepted Banksy’s challenge to stage the performance, despite not having met him. The Walled Off Hotel an ambitious installation work opened in March, boasting the “worst view in the world”. It is situated next to the controversial barrier wall built by Israel around the West Bank. 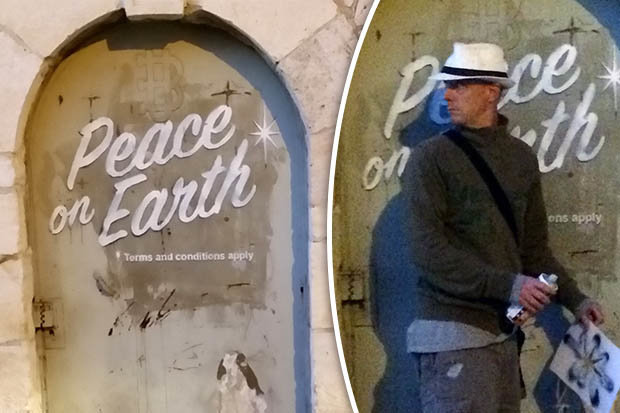 Is this a new photo of Banksy unmasked?

The documentary about the performance will be screened on BBC Two on Sunday and is said to follow Boyle overcoming the “many restrictions” to find a cast, crew and local children, and put together the show in six weeks. The performance took place on 3 December and was co-directed by Bethlehem-based Riham Isaac. Another video shows local children singing in Arabic while rehearsing.

A promotional image for the documentary has been created by Banksy. It shows a drone watching over the nativity scene. He also put up two new artworks ahead of the event. One said “Peace on Earth” next to a twinkling star, which doubled as an asterisk. Below was the same asterisk and the words “Terms and conditions apply”. The other artwork was painted on the wall and showed two cherubic angels trying to prise two panels apart with a crowbar.

“It is brilliant for BBC Two to be working with Danny Boyle, Banksy and the creative team who together are making this alternative nativity. – Patrick Holland BBC 2 Controller said: “It promises to be a challenging and provocative exploration of a story that speaks to young and old alike.” Boyle won an Oscar for Slumdog Millionaire and also masterminded the London 2012 Olympic opening ceremony.

The elusive British street artist Banksy recently staged an apology for the 100th anniversary of the Balfour Declaration outside his hotel
The faux event was organised around 50 children with a masked double dressed as Queen Elizabeth II. Modelling it on an English-style tea party. Helmets with British flags and bullet holes were worn along with moth-eaten Union Jacks waved by the guests. 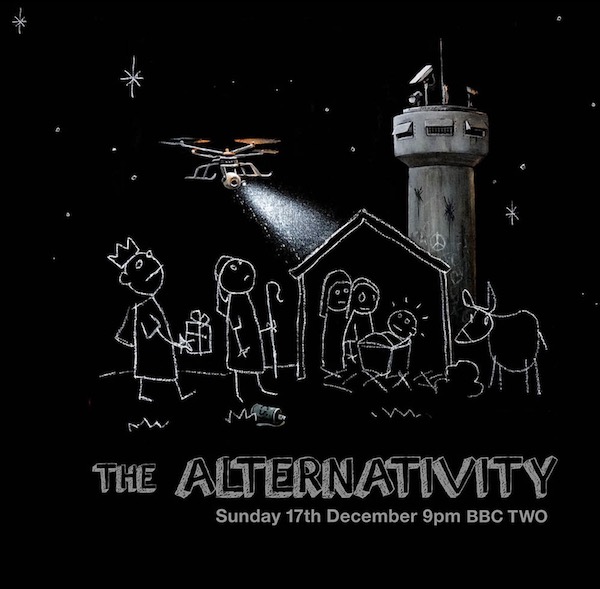 Banksy is a legendary Bristol-born graffiti artist. His work typically includes satirical social and political commentary, and ranges from murals to sculpture and installation, often playing with the contextual aspects of the work. The artist’s first solo show was held in 2002 at Los Angeles’ 33 1/3 Gallery, and in 2003 he was commissioned to design to cover of Blur’s ThinkTank. Today, Banksy’s work appears internationally; most notably, he painted nine sardonic images on the Palestinian side of the West Bank barrier. In Summer 2009, Banksy took over the Bristol Museum and Art Gallery with an exhibition attracting over 300,000 visitors. His Dismaland project in Weston Super Mere attracted tens of thousands of visitors and boosted the local economy by £20m. The prophetic street artist created a centrepiece fire-ravaged Disney-like castle with payday lender stalls and a remote-controlled boat game which highlights the plight of immigrants. The show on the pier featured a Jimmy Savile Punch and Judy, highlighting domestic abuse scripted by the journalist Julie Burchill. Read More