Less than 48 hours after being unveiled, a controversial statue of David Bowie, situated in Aylesbury, Buckinghamshire, has been sprayed over by vandals. We don’t think this was a critical statement aimed at the poor quality of this bronze depiction, however it is considered an improvement by many of our readers.

Music promoter David Stopps, the man behind raising the funds for the artwork, said: “We can get that paint off, we will be working on it today. “It is a public piece of art and we will keep looking after it on a daily basis.”There is a webcam on it 24/7 so whoever did it, we have got them on webcam.”

Deputy Mayor Mark Willis, who was at the unveiling, said: ‘I want to point out that this statue received precisely £0 of public money. ‘That’s right, £0. It was entirely funded through crowdfunding, by members of the public, myself included. ‘One of the charities I support monthly is Shelter as homelessness and poverty are absolute scourges on society that need solving.’ Commenting on the damage, one local said: ‘Uneducated people with very low standard lives! Vandals and disrespectable morons!’ The sculpture was daubed with RIP DB and the call to action ‘feed the homeless’. 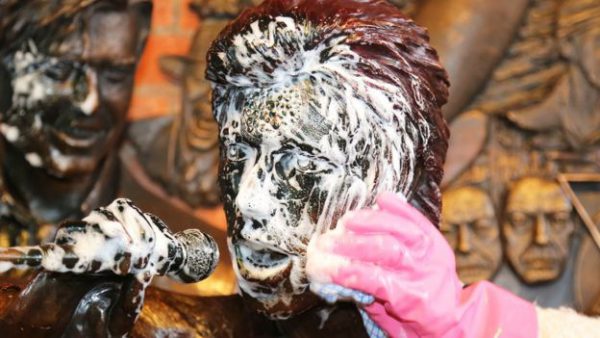 This bronze statue was dedicated by 80s ‘Pop’ star Howard Jones who pulled the cord on Saturday. The poorly rendered depiction of Bowie pays homage to the artist’s Ziggy Stardust character, which was first performed in the town. The memorial sculpture was made possible through a £100,000 crowdfunding campaign by music promoter David Stopps. It resulted in a poor quality statue that would make Bowie turn in his grave or mischievously laugh at the remarkably awful monument.

The bronze sculpture, entitled Earthly Messenger, located in the Market Square, follows other wasted artistic opportunities such as the statues of Amy Winehouse in Camden Lock and John Lennon in Liverpool.

Bowie, a former publisher of the respected Modern Painters Magazine and avid collector of Contemporary and Modern Art, deserves better. So why wasn’t a well-known ‘fine art’ sculptor selected to create the public work? This shows the depth of not understanding the man depicted. 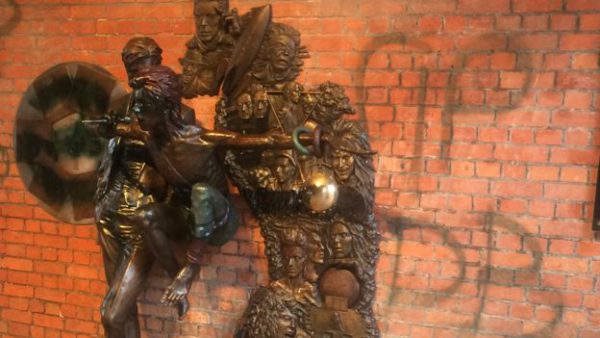 Bowie was also a painter who exhibited internationally. He had a particular love of Modern British art as well as the German Expressionists. His art collection was sold by Sotheby’s when they staged Bowie/Collector, a three-part sale encompassing over 350 works from the private collection of the legendary musician. At the heart of, the sale was a remarkable group of more than 200 works by many of the most important British artists of the 20th Century, including Frank Auerbach, Damien Hirst, Henry Moore and Graham Sutherland. Not to mention two major works by the New York painter Jean-Michel Basquiat

The artist of this kitsch rendition is Andrew Sinclair MRBS. His bio describes him as recognised as a master of world-class figurative sculpture. His catalogue of work appears at the Royal Box at Ascot, Epsom Racecourse, and Crosby Hall (Sir Thomas Moore’s old palace) in London… certainly not Tate Britain! His sculptures range from historic bronze re-creations for public spaces and private commissions, commemorative portraits for museums and industry magnates, to fantasy sculptures such as dinosaurs and dragons.

Read more About The Statue Here