A new gallery opens to the public today in Bradford dedicated to the artist David Hockney. It is a birthday present from his hometown honouring his 80th birthday. The gallery is located in rooms on the first floor in Cartwright Hall, a place he often visited in the 1940s and ‘50s.

The new permanent space covers work created by the artist spanning his career. A number of rare unseen photos from his personal albums along with some of his earliest sketchbooks accompany the displays. Many of the paintings on show depict street scenes and local markets. They were painted when the artist attended Bradford School of Art in the 1950s.

“I used to love going to Cartwright Hall as a kid,” Hockney said in a statement. “It was the only place in Bradford I could see real paintings.” Curator Jill Iredale said: “He’s had quite a close connection with Cartwright Hall from when he was a child. “The first times he came were his parents bringing him here. They had a really strong belief that education was important and his father was particularly interested in art.”  “He has been incredibly generous in his support in lending us his works. He was very encouraging and supportive of what we were doing,” she added. The photos from his personal albums include shots of him in the US standing by his beloved blue California pools soon after moving there for the first time in the 1960s. There are others of him with his mother and father on a boat in the Lake District in the 1970s, and with his dogs in the ’80s. 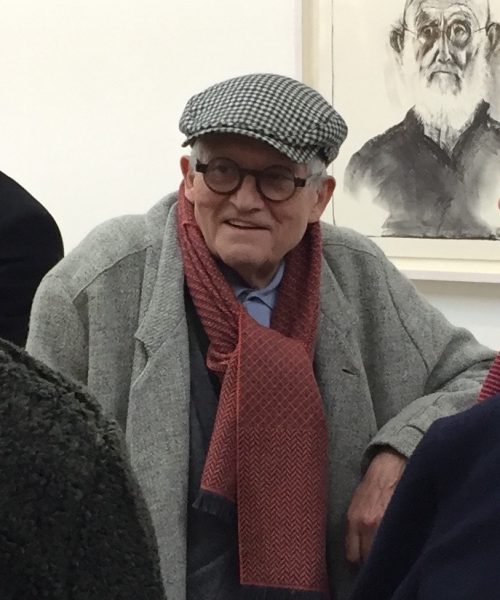 “We were really lucky that he granted us permission to first of all actually look at them and secondly to display them in public because they’ve never been shown before,” Iredale said.

Works from his time at the Royal College of Art in London to a large-scale California pool painting to iPad sketches he made while living back in Yorkshire six years ago.

On Sunday, local arts group The Brick Box will host the ‘Happy Birthday Hockney’ party, transforming Lister Park into a colourful celebration of the artist’s life. Visitors will be able to get ‘Hocknified’, by donning a wig and glasses and clutching a toy dachshund, before hitting the dancefloor at the Hockney Disco. There will be a huge cake made to look like Le Plongeur, unveiled during a mass singalong of Happy Birthday. Five actors will portray Hockney in different stages of his life and there will be a world record attempt for the most people to sign a birthday card.

There will also be giant puppets, iPad art sessions and a vintage bus running between Lister Park and Salts Mill in Saltaire, which has for many years celebrated the artist’s work. Brick Box director Rosie Freeman said they had wanted to put together a party which echoed Hockney’s style and sense of humour.