A David Hockney painting depicting an iconic landscape with swimming pool has broken world records in New York. Portrait of an Artist (Pool with Two Figures), painted in 1972, realised $90.3 million after frantic bidding. This is a world record price for a living artist meanwhile the 20th Century season total passes the $1 billion mark. 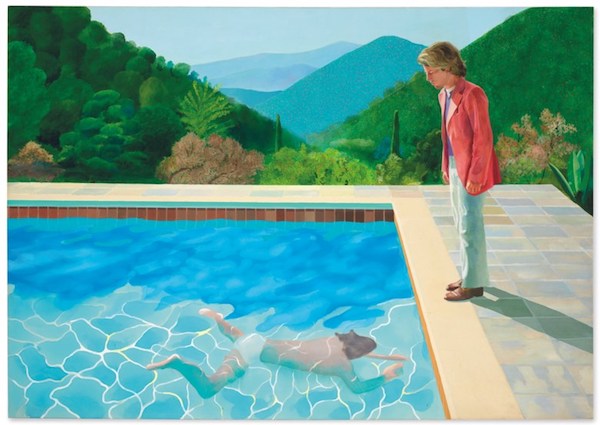 The 1972 masterpiece combines two of the artist’s most celebrated motifs — the swimming pool and the double portrait — and appeared on the cover of the catalogue for David Hockney, which opened at Tate Britain in February 2017 before touring to the Centre Georges Pompidou in Paris and the Metropolitan Museum in New York.

Inspired by the serendipitous juxtaposition of two photographs on his studio floor, Hockney abandoned his first attempt at the painting in 1971 before returning to the idea in April of the following year. With an exhibition at New York’s André Emmerich Gallery due to open just four weeks later, the 24-year-old Englishman worked 18 hours a days for two weeks, finally finishing the night before the shippers came to transport the painting to the United States.

Portrait of an Artist (Pool with Two Figures) was offered without a reserve. The bidding opened at $18 million and quickly passed the previous record for a work by a living artist — $58,405,000 for Balloon Dog (Orange) by Jeff Koons set in 2013 at Christie’s. After a contest lasting more than nine minutes, applause rang out as the hammer finally came down to confirm the record price.

The sun-drenched Hockney was one of a host of impressive results on a bitterly cold night in Manhattan. Among them was Mark Rothko’s Untitled (Rust, Blacks on Plum) from The Collection of François and and Susan de Menil, which achieved $35,712,500.

Painted in 1962, in the immediate aftermath of the artist’s first retrospective at the Museum of Modern Art in New York, the work remained in Rothko’s personal collection until his death in 1970. The selection of works from the collection, which included four pieces by Joseph Cornell, totalled $43,967,500. 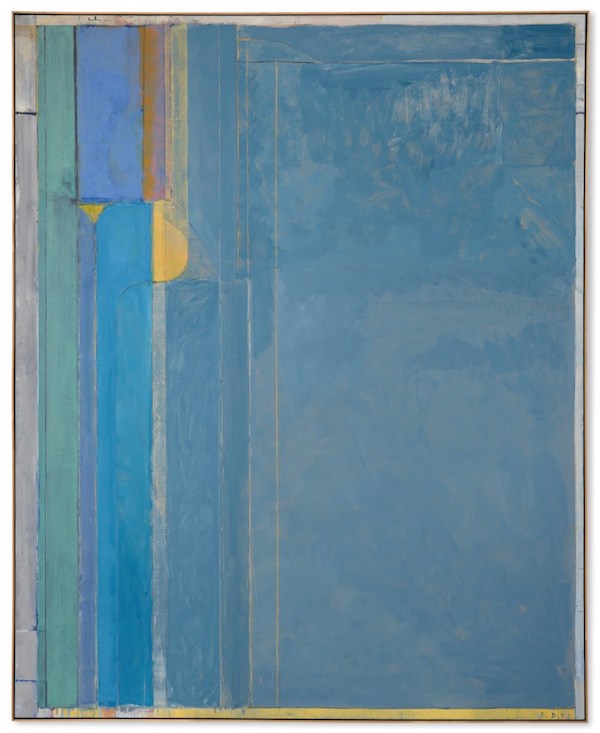 Ocean Park #137 by Richard Diebenkorn is a late work from the series inspired by the light and landscape of southern California. Formerly in The Collection of Mary Tyler Moore, this monumental 1985 canvas sold for $22,587,500.

Study of Henrietta Moraes Laughing, Francis Bacon’s final named portrait of the muse he painted between 1959 and 1969, was bought for $21,687,500. The work came from The Collection of S.I. Newhouse, the late co-owner of Condé Nast and one of the greatest collectors of the 20th century.

Completing the top-five was Jean-Michel Basquiat’s Discography Two (1983), which testifies to the artist’s obsession with the heroes and martyrs of jazz, and realised $20,900,000.

Property from the Collection of Harry W. and Mary Margaret Anderson provided another highlight. The eight works in the sale, which were led by Alexander Calder’s Untitled and David Smith’s 5 Ciarcs, totalled $34,435,000 with more works to be offered on Friday.

As well as the best works from most prestigious private collections, the appetite for pictures by traditionally under-represented artists was another prominent theme on the night. Sam Gilliam’s Lady Day II set the trend, establishing a new world auction record for the artist when it sold for $2,172,500.

Later, a painting by Robert Colescott appeared in a Christie’s evening sale for the first time, with Cultural Exchange (1987) selling for $912,500 — a new record for the artist. There were strong showings, too, for works by Vija Celmins, Cecily Brown, and Martin Puryear, who will be representing the United States in the Venice Biennale next year.