Alongside Shrigley, the Mayor of London, Sadiq Khan, Justine Simons, Deputy Mayor for Culture and Creative Industries and Ekow Eshun, Chair of the Fourth Plinth Commissioning Group each spoke of the optimism and positivity that the new work demonstrates. The work was commissioned by the Mayor of London as part of the Fourth Plinth Programme. Really Good is the eleventh sculpture to stand on Trafalgar Square’s celebrated plinth and is the first major public art commission to be unveiled under the auspices of the new Mayor for London Sadiq Khan. Really Good sees a ten-metre-high hand giving a thumbs up. Cast in bronze, with the same dark patina as the other statues in Trafalgar Square, the thumb is disproportionately long. Shrigley’s ambition is that this simple gesture will become a self-fulfilling prophecy; that things considered ‘bad’ such as the economy, the weather and society, will benefit from a change of consensus towards positivity. The Mayor of London, Sadiq Khan, said: “The positivity and humour evident in David Shrigley’s commission Really Good truly encapsulates the spirit of London. The changing artworks on Fourth Plinth continue to be a source of delight, discussion and debate and I am proud to be the Mayor of a city that has such an energetic and vibrant cultural life.” Ekow Eshun said, “David Shrigley has created a powerful work, rich with humour and insight about modern Britain, that will be enjoyed by everyone that sees it”. The Fourth Plinth Programme is the smallest but most prominent sculpture park in the world. Funded by the Mayor of London with support from Arts Council England, the programme invites world-class artists to make astonishing new works for the centre of the capital city. An established icon for London, it brings out the art critic in everyone. A pop-up tent has been set up in Trafalgar Square until 2 October 2016 in partnership with Flying Tiger Copenhagen, which will host daily art workshop for primary school children. It will also offer a range of products created with David Shrigley. A percentage of the revenues will go directly to help grow the Fourth Plinth Schools Awards and other public programmes. The fourth plinth programme was initiated in 1998 by the RSA with the support of the Cass Sculpture Foundation. In 1999 responsibility for Trafalgar Square was transferred to the Mayor of London and the Fourth Plinth Programme is now led by the Mayor’s Culture Team, under the guidance of the Fourth Plinth Commissioning Group (FPCG). Its first commission was Marc Quinn’s sculpture Alison Lapper Pregnant, unveiled in September 2005. It was followed by Thomas Schütte’s Model for a Hotel in 2007 and by Antony Gormley’s One & Other in 2009. Yinka Shonibare MBE’s sculpture Nelson’s Ship in a Bottle remained on the Fourth Plinth until the end of January 2012 and now has a permanent home at the National Maritime Museum in Greenwich. Powerless Structures, Fig 101 by artist duo Elmgreen & Dragset was unveiled in 2012 and will be housed permanently at the Arken Museum of Modern Art, Denmark.  Katharina Fritsch’s Hahn / Cock was unveiled in July 2013. Hans Haacke’s Gift Horse was the tenth commission to be unveiled on the plinth, where it remained until September 2016. Previous commissions have been Ecce Homo by Mark Wallinger (1999), Regardless of History by Bill Woodrow (2000) and Monument by Rachel Whiteread (2001). Arts Council England has been a significant funding partner of the programme. 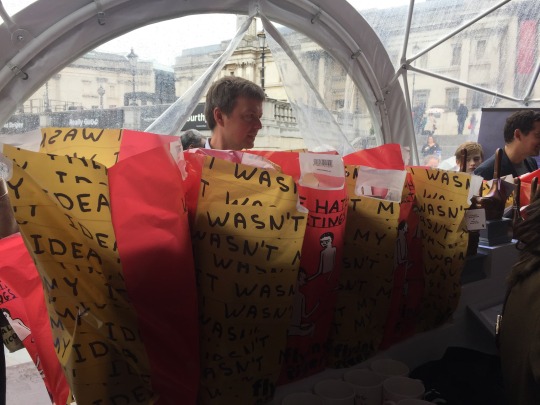 Born in 1968 in Macclesfield, David Shrigley lives and works in Brighton. His work draws on the British tradition of satire, creating drawings, animations and sculptures that reflect the absurdity of contemporary society. He has had recent solo exhibitions at Auckland Arts Festival, New Zealand (2015); National Gallery of Victoria, Melbourne (2014-15); Pinakothek der Moderne, Munich (2014); Bradford 1 Gallery (2013); Cornerhouse Gallery (2012), Hayward Gallery, London (2012); Yerba Beuna Centre for the Arts, San Francisco (2012); and Kelvingrove Museum, Glasgow (2010). Shrigley’s Pass the Spoon was performed at Tramway, Glasgow, and Southbank Centre, London (2011-12), and he was nominated for the Turner Prize in 2013.

The Fourth Plinth isn’t the only public place in London to display Shrigley’s work.  His design ‘London: Everyone Welcome’ (along with those by a series of other artists) can be seen across the Tube network on large scale poster sites and digital displays, incorporating the themes of openness and diversity.

Meanwhile across the pond, ‘Memorial’ an average  grocery list carved onto a 17-foot granite slab was recently installed in New York City at the entrance to Central Park at 60th street. The accompanying explanation on the Public Art Fund’s signage reads “ While Shrigley’s shopping list might appear to posture as a counter-monument, through its celebration of a common activity, its anonymity, and absurdity, the sculpture becomes a memorial both to no one and to everyone- serving as an ode to humanity”.