Wolverhampton Art Gallery’s first contemporary exhibition of 2018 is a reconfiguration of the popular Diaspora Pavilion, which took place in Venice during the 57th Venice Biennale and welcomed over 45,000 visitors, between 10 May and 26 November 2017. The exhibition set to take place in Wolverhampton will feature works by seven of the nineteen artists who exhibited in the Venice Diaspora show, alongside some new works.

A multitude of intercultural narratives presented across a variety of media

The Diaspora Pavilion opens up space for artists to present counter-narratives that interrogate the critical capacity of ‘diaspora’ as a concept. Through a multitude of intercultural narratives presented across a variety of media, the exhibition aims to resist the normalisation of the term and to demonstrate that diaspora is an ever-present and ongoing process that has far-reaching implications across social and cultural practices, not just within the UK but globally. The very complexity and transience of the diasporic experience lend to the interrogative approach that this exhibition attempts to present, demonstrating through these works the range and density of visual expressions that articulate our present predicaments in light of these decentering forces.

In Venice, the Diaspora Pavilion worked to challenge the prevalence of national pavilions within the biennale structure, positioning itself in opposition to the very concept of a permanent national pavilion, yet adopting the term as a means of posing an intentional juxtaposition between the structures and modalities of this Biennale and the discontinuity of the diasporic condition. As the exhibition is reformulated for Wolverhampton Art Gallery, the conversations about the urgency and relevance of diaspora initiated at the 2017 show shift now in response to the historical importance of Wolverhampton in the establishment of The Blk Art Group and its connection to the wider British Black Arts Movement. Acknowledging the long-standing contributions of diasporic communities in the region, the Diaspora Pavilion explores the multiple meanings of the concept in the present moment.

Sadly missing from the exhibition are the superb photographs by Khadija Saye, the artist who died in the Grenfell Tower fire, in London, last June. Three of these works are currently on show at the re-launch of Kettles Yard in Cambridge.

Diaspora Pavilion | Venice to Wolverhampton will take place from 10 February until 29 April at the Wolverhampton Art Gallery, with an opening event on 9 February from 5:30 pm onwards. The curators of the exhibition, David A. Bailey and Jessica Taylor, and the artists have worked closely with the gallery staff to bring this new restaging of the work to the UK. 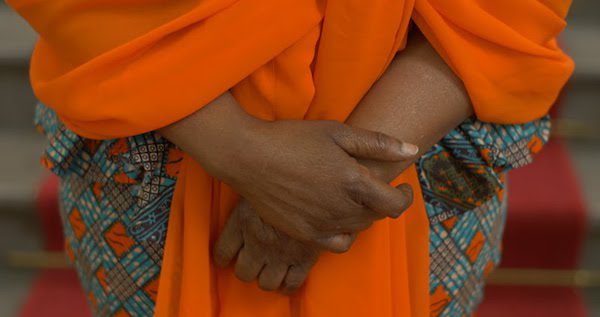 Larry Achiampong’s solo and collaborative projects employ imagery, aural and visual archives, live performance and sound to explore ideas of crossWcultural and postWdigital identity – in particular, dichotomies found within a world dominated by social media and digital frameworks. With the enduring expansion and sharing of information via the Internet, the idea of a oneWsizeWfitsWall version of history, as previously dictated, continues to be eradicated. At the heart of this phenomenon lies Achiampong’s increased interest in what new truths or versions become available, the multiple possibilities that are created and maintained in the digital realm and the consequences related to ‘IRL’ or ‘In Real Life’. Achiampong crateWdigs the vaults of history, splicing audible and visual qualities of the personal and interpersonal archiveWasW material W offering multiple dispositions that reveal the socioWpolitical contradictions in contemporary society. 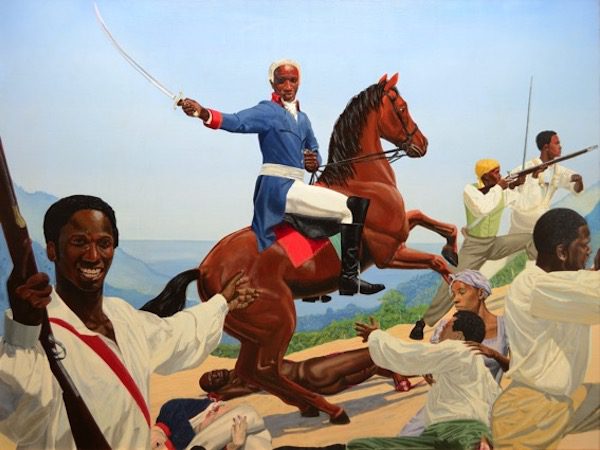 Kimathi Donkor reWimagines mythic and legendary encounters across Africa and its global Diasporas, principally in painting, but also through drawing, video, assemblage, collage, digital media, performance and installation. Narrative paintings address historic figures like Harriet Tubman and Toussaint L’Ouverture, as well as themes such as urban unrest or the pursuit of leisure, beauty and knowledge. His solo exhibitions include Some Clarity of Vision at Gallery MOMO (Johannesburg, 2015), Queens of the Undead with Iniva at Rivington Place (London, 2012) and Fall/Uprising at the Bettie Morton Gallery, (London, 2005). Group exhibitions include Untitled: Art on the Conditions of Our Time at the New Art Exchange (Nottingham, 2017) and the 29th São Paulo Biennial (Brazil, 2010). 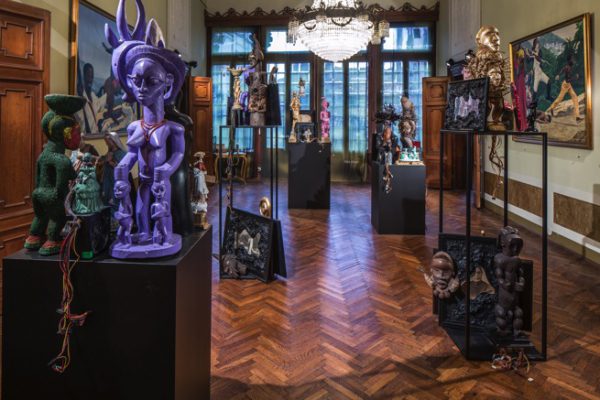 Michael Forbes is an artist and curator. He was involved with the early stage development work for the New Art Exchange, Nottingham (1999 W2010) and is a board member of PRIMARY (trading as Nottingham Studios), (Chair from 2006W 2011) and now the Chair again from January 2017. Forbes has curated many exhibitions including work at the Bonnington Gallery, Primary and Yard Gallery in Nottingham. In 2010 Forbes coWcurated a PopWUp presentation in the Nottingham Exchange Building and has delivered eight major exhibitions at the Art Exchange and New Art Exchange over a number of years. In 2011, with Arts Council England support, Forbes undertook a twelveWmonth residency and development project at the International Studio and Curatorial Program in New York (leading to exhibitions and other professional development opportunities in the city and elsewhere). 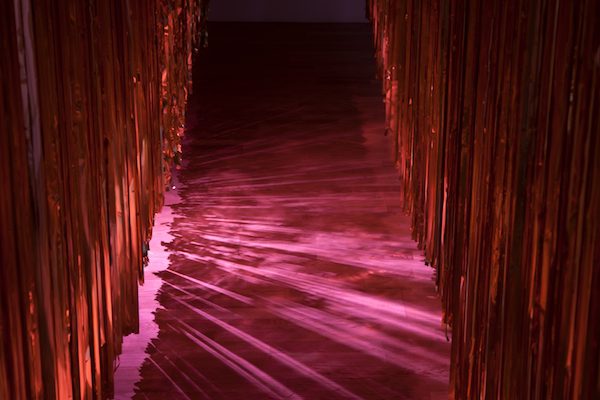 susan pui san lok is an artist, writer and researcher based in London. Her work ranges across moving image, installation, sound, performance and text, evolving out of interests in notions of nostalgia and aspiration, place and migration, translation and diaspora. Solo projects include: RoCH Fans & Legends at CFCCA, Manchester (2016) and QUAD, Derby (2015) and Golden (2005W
ongoing), an Arts Council England and AHRCWfunded project, including exhibitions, residencies, a publication, live events, and commissions for Beaconsfield, London, Chinese Arts Centre, Manchester, and Guangdong Museum of Art (2015W2016). Recent group exhibitions include the 1st Asia Biennial & 5th Guangzhou Triennial (2015W2016). In 2017, she was in residency at the Van Abbemuseum, Eindhoven, as part of the research programme, Deviant Practice. 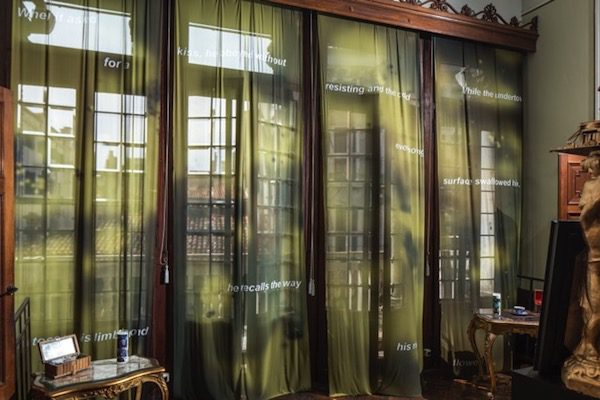 Paul Maheke’s current research imagines the body as an archive using its waters as pathways to information and knowledge. This investigation occupy a metaphorical space wherein which the body resonates and echoes with the broader socioWpolitical and historical context that have birthed it. With particular attention to dance, it proposes to rearticulate the representations of queer Blackness that emerge from Western imaginations by addressing History through nonW human subjectivity. Maheke was born in France, and lives and works in London. He was awarded the South London Gallery Graduate Residency 2015W16 and his exhibition ‘I Lost Track of the Swarm’ was exhibited in the first floor galleries in late spring 2016. Recent projects include: ‘Ten Days Six Nights’, cur. Catherine Wood and Andrea Lissoni, Tate Modern, London, UK (2017); ‘Acqua Alta’, Sultana Gallery, Paris, FR (2017, solo show); ‘What Flows Through and Across’, Assembly Point, London (2017, solo show). Upcoming shows include a solo show at Chisenhale Gallery, London (April, 2018), the Baltic Triennial, the Rennes Biennale and Manifesta.
Image: Paul Maheke. ‘The River Asked for a Kiss (to Pateh Sabally)’ (2017), curtains with digital print at the Diaspora Pavilion. Image courtesy ICF. 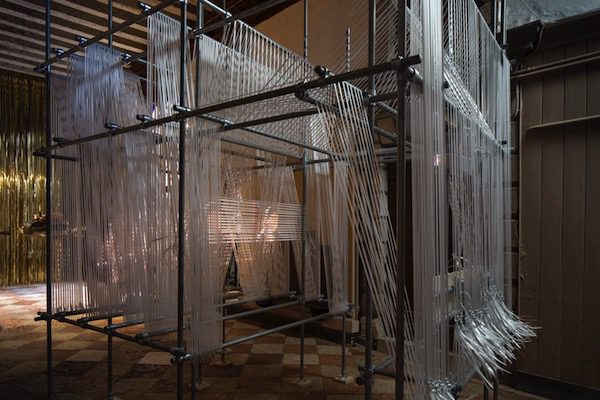 Erika Tan’s practice is primarily researchWled and manifests in multiple formats, with a leaning towards moving image, referencing distributed media in the form of cinema, galleryWbased works, internet and digital practices. Evolving from an interest in anthropology and the moving image, her work is often informed by specific cultural, geographical or physical contexts. Her research interests focus on the postcolonial and transnational, working with archival artefacts, exhibition histories, received narratives, contested heritage, subjugated voices and the transnational movement of ideas, people and objects. Recent projects (Come Cannibalise Us, Why Don’t You / Sila Mengakanibalkan Kami, Mahu Tak?) explore the discursive connections between the technology of cinematic green screen space to that of the museum and its technologies of dislocation W with particular focus on the colonial Museum in ‘Malaya’ and the repatriation of objects ‘with no shadow’. 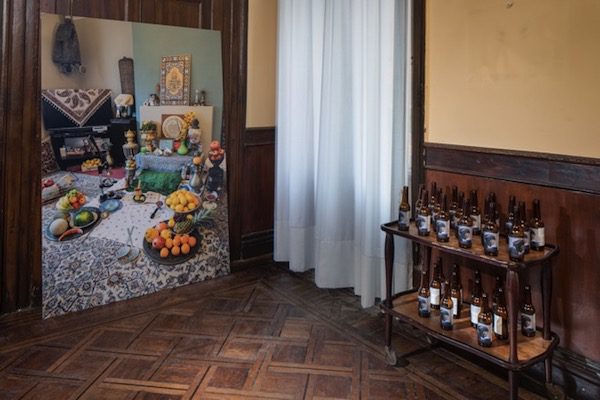 Abbas Zahedi’s practice has evolved towards a framework of neoWdiaspora; in an effort to process and deWhistoricise his experience of migration, death and displacement. In its current form, Zahedi uses the term alongside installations, performances and images, to highlight a sense of estrangement amidst hyperWconnectivity.

In light of recent social and informatic shifts, this method has developed a broader poignancy, going beyond the frame of conventional migrations. Thus Zahedi’s phrasing of neoWdiaspora follows on from this; expressing that he can no longer relate to the notion of diaspora in the traditional sense W as a movement about margins and metropoles. But instead, it has become a paradox of survival within a transitional and schizoid state, of belonging to multiple imaginal spaces.

A re<staging of works from the Venice Diaspora Pavilion