Christie’s NY will be offering a large Richard Diebenkorn, Ocean Park series painting from 1985 on November 15. The iconic artwork, perhaps the most important in the series due to its size, comes from the Collection of the late actor Mary Tyler Moore and Dr S. Robert Levine.

At over eight feet tall, Ocean Park #137 was executed on the largest canvas that Diebenkorn could possibly fit through his studio doors. This monumental painting is one of the final works from Diebenkorn’s celebrated Ocean Park series and stands as a majestic example of the entirely new language of painting inspired as much by art historical traditions as by the light and landscape of California.

Bonnie Brennan, Deputy Chairman, Christie’s New York, remarked: “Mary Tyler Moore was known for her groundbreaking performance as a strong, independent career woman who inspired both the generation that watched her, as well as all woman today, to dream big. It is both a great personal and professional honour to celebrate her great strength as well as the passion that she and her loving husband, Dr S. Robert Levine, MD, expressed in the collection that they built. We are delighted that a portion of the proceeds from the sale of this remarkable work will continue the couple’s longtime philanthropic legacy, supporting many of the causes that they were so passionate about.”

An iconic figure in the history of American entertainment, Mary Tyler Moore was the very embodiment of her beloved public persona. Charming, intelligent, and imbued with an indomitable spirit, she touched the lives of all who knew her and the millions who watched her on screen. Moore forged a legendary career with television hits The Dick Van Dyke Show and The Mary Tyler Moore Show, and in films such as Thoroughly Modern Millie and Ordinary People. Celebrated for her unforgettable onscreen charisma and trailblazing female characters, the actress is also remembered as a leading advocate for finding a cure for type 1 diabetes and its complications, a model of creative innovation and personal perseverance, and a loving wife and partner.

In 1970, Moore forever changed the course of television history, as she starred in the groundbreaking CBS sitcom The Mary Tyler Moore Show. The idea of a single career woman as the protagonist of a major network sitcom was a radical concept; only an actress as talented as Moore could have pulled off the feat. Yet it was not merely Moore’s acting chops that made her eponymous sitcom such a success. Instead, it was the actress’s insistence on surrounding herself with the very best in writing, production, and acting— a unique combination that paved the way for every women-focused show since.

In the same way that Moore the actress personified steadfast self-assurance and warmth, so did she dedicate herself to these principles in the public sphere. For more than four decades, Moore battled type 1 diabetes (T1D) and became the world’s leading voice for the fears and hopes of people and families affected by T1D and its complications and its most recognised champion for funding of research for a cure through the Juvenile Diabetes Research Foundation (JDRF). A noted lover of animals Moore was the co-founder, with Bernadette Peters, of Broadway Barks, an initiative which, with the help of Broadway stars and Broadway Cares, Equity Fights AIDS, raises awareness of the importance of shelter adoption and spay and neuter. Ms Moore and her husband, Dr S. Robert Levine, committed themselves to use her persona and success, and his medical background and other skills, for useful purposes. As such, a portion of the proceeds from the sale of Ocean Park #137 will benefit the Mary Tyler Moore and S. Robert Levine, MD Charitable Foundation to continue the couple’s longtime philanthropic mission. 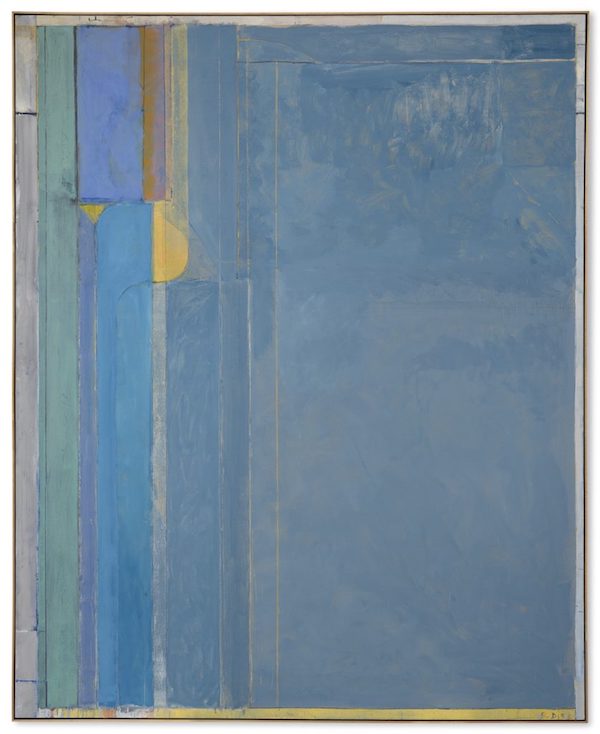 November 15th will mark the first time that Ocean Park #137 has changed hands since Ms Moore, and Dr Levine acquired the painting in 1988. They bought the painting together, 5 years into the loving marriage that lasted until Moore’s death in January of last year, at the age of 80. Ocean Park #137 arrived in New York shortly after it was completed to be included in the artist’s solo exhibition at the Knoedler gallery. In his review of the show, New York Times art critic John Russell described the Ocean Park paintings on view as “the single longest continuous exploration of a given motif in the work of any substantial living American painting…The Ocean Park chapter will never be closed.”

Diebenkorn began the Ocean Park series in 1967, soon after he moved down from San Francisco to Southern California to accept a teaching position at UCLA. His friend and fellow painter Sam Francis invited him to take over his studio in Ocean Park in the southwest corner of Santa Monica, which came with big windows that looked out over the roofs and buildings to bright strips of beach and sea and sky beyond. Diebenkorn was hardly alone in his new neighbourhood. Ocean Park’s inexpensive rent attracted a wide range of artists including James Turrell, William Wegman, Robert Irwin, and John Baldessari. Diebenkorn was happy there and almost immediately began painting the large-format geometric abstractions that would seal his place in history.

At the time he moved in, Diebenkorn was best known for his sudden radical shift in style that occurred in the mid-fifties. Having first achieved fame after the war as an abstract painter, a West Coast answer to Robert Motherwell and Willem de Kooning, Diebenkorn abruptly abandoned the fashionable manner and rose to prominence again as the leading member of the Bay Area Figurative Movement that included David Park, Elmer Bischoff, and Wayne Thiebaud. In both incarnations, his supple line and pitch-perfect sense of colour set him apart, gifts of ease and fluidity that stood in contrast to his own reflective temperament, a natural inclination that made him prize revision as a working method.

On View at Christie’s Los Angeles from 23-27 October