An iconic secondary market Banksy mural that was hacked off of a wall in London is to go under the hammer at Julien’s Auctions in LA. The auction house’s Street and Contemporary Art Auction will take place November 14, 2018. Banksy’s authentication board Pest Control refuses to acknowledge works when removed from their original site-specific locations, so in-theory they have no value on the secondary market.

Banksy’s latest Sotheby’s auction stunt made headlines around the world when a stencil of Balloon Girl shredded itself seconds after the gavel came down on the £1 million lot.

Slave Labour (Bunting Boy) is a black and white aerosol mural on concrete piece (top photo), embellished with plastic flags executed by Banksy in May 2012 on the outer wall of a Poundland discount store in Wood Green, London (estimate: $600,000-$800,000). The mural is mounted on a custom platform and is accompanied by a clear protective case. Slave Labour depicts a young child on his knees at a sewing machine, diligently producing a string of Union Jack bunting. It is believed to have been created by Banksy as a protest against the use of sweatshops for the manufacture of souvenirs commemorating the Queen’s Diamond Jubilee and the 2012 upcoming Summer Olympics in London. One of the most publicised and poignant examples of Banksy’s social commentary, Slave Labour helped bring international attention to the exploitation of youth.  “We can’t guarantee that our four Banksy’s will automatically shred or explode but they will sell to the highest bidder!” said Darren Julien, President/Chief Executive Officer of Julien’s Auctions. 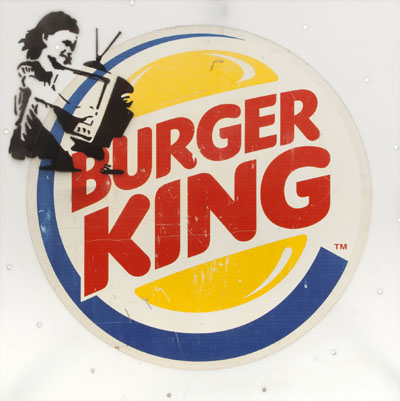 Other notable Banksy works are also featured in the sale including Crazy Horse (estimate: $100,000-$125,000), TV Girl (estimate: $40,000-$60,000) and Applause ($10,000-$15,000). Crazy Horse, a 2013  aerosol on car door with orange traffic cone installation was produced in New York City’s Lower East Side, consisted of two heavily painted vehicles depicting a stampede of horses bearing down on a huddled group of terrified people, and included a phone number through which audio clips could be heard from a 2007 Baghdad airstrike by an Apache helicopter troop with the call-sign “Crazy Horse 18” in which two Reuters correspondents were reportedly killed. The audio and video transmissions from the airstrike, which had been released by Wikileaks in 2010 under the title “Collateral Murder,” were shocking due to the apparent indifference of the troop regarding the loss of life, with one soldier saying “Oh well. Well, it’s their fault for bringing their kids to a battle.”

Installed on October 9, 2013, as part of Banksy’s highly-publicised New York City residency “Better Out Than In,” is a reference to a quote attributed to 19th-century impressionist painter, Paul Cezanne, “…all pictures inside, in the studio, will never be as good as those painted outside.” The work is accompanied by a custom-built display stand. Banksy’s Instagram post of this artwork on his personal account can be seen via the following link https://www.instagram.com/p/fQEYojK-we/

TV Girl (circa 2003/2004) is an aerosol on Burger King sign) executed by Banksy in his hometown of Bristol, England. It is accompanied by a signed letter from SWRDA relinquishing ownership of the sign from the building site, and a signed letter from Brandler Galleries regarding the work’s authenticity and value. (estimate: $40,000-$60,000).

Additional highlights of the auction include Street Art legend Jean-Michel Basquiat and his work Head (Portfolio I) (estimate: $80,000-$100,000) – a 2001  (Basquiat died in 1988) Screenprint on paper from the series published by DeSanctis Carr Fine Art and authorized by the Basquiat Estate and Untitled (Portrait with Crown of Thorns II) – 1981  by Basquiat, marker on paper signed and dated in black marker lower right (estimate: $20,000-$40,000).

A rare, personal item of Basquiat’s will also be offered at auction: his black wool Comme Des Garçons coat. (estimate $20,000-$30,000). The coat was in possession of Basquiat’s last girlfriend Kelle Inman after the artist’s death in 1987. Basquiat is known to have been a fan of the casual, urban streetwear line and modelled on the runway for their Spring/Summer 197 Collection. Several photographs of Basquiat wearing the coat exist including images with Andy Warhol, Spike Lee and his mother, Matilde Andradas.

Also featured in the Street Art auction is Invader with LA_200 – 2018  executed on the side of a Los Angeles law office building (estimate: $20,000-40,000); New York’s pop art and graffiti artist Keith Haring’s Untitled (Robot and Snake) (estimate: $15,000-$20,000) with his 1984 White marker on black cardstock panels work. The sale also features Shephard Fairey with 2012 Arab Woman, (estimate: $6,000-$8,000), a screenprint on embossed paper as well as pop culture provocateur RETNA with Sonia 2 2010  Screenprint on paper, estimate: $10,000-$15,000.) The November 14 event will also include works by Andy Warhol, Clet Abraham, Kusama, Swoon, Mr Brainwash, KAWS and more. Highlights of the sale include Banksy’s Slave Labour Mural. The mural painted by the British artist in London to protest the use of child labor to manufacture London Olympics memorabilia in 2012; Banksy’s 2013 Crazy Horse, aerosol on car door executed as part of his “Better Out Than In” 2013 New York City residency; Jean Michel Basquiat’s 2001 HEAD from Portfolio 1, accompanied by a certificate of authenticity signed by Basquiat estate administrator Gerard Basquiat; a black wool Comme Des Garçons brand coat owned and worn by Jean Michel Basquiat, previously owned by his last girlfriend after his death in 1987; THE PEOPLE’S PRISON 2018 guerilla art project by anarchist art collective INDECLINE, featuring the pop–up prison cell created for a Trump Tower hotel suite; French artist INVADER’s 1969 LA_200 – 2018 executed on the side of a law offices building in Los Angeles and much more.