Sabine Schormann, the director general of Documenta, which has been embroiled in an antisemitism row, has resigned from her post. Alexander Farenholtz will now assume the role of interim Documenta director.

Here is the statement by the documenta gGmbH Supervisory Board:

1. The Supervisory Board, the shareholders, and General Manager Dr Sabine Schormann mutually agreed to terminate her managing director service contract immediately. Initially, an interim successor will be sought.

2. The Supervisory Board expresses its deep consternation that antisemitic motifs were to be seen on the opening weekend of documenta fifteen. The presentation of the banner “Peopleʼs Justice” by the artist collective Taring Padi with its antisemitic imagery was a clear transgression of boundaries, and documenta was thus considerably damaged. In the opinion of the Supervisory Board, it is essential to clear up this incident promptly, to draw conclusions based on scientific findings for dealing with antisemitic incidents in the cultural and artistic context, and to avert further damage to documenta. A great deal of trust has been lost due to the hanging of the banner and in the course of crisis management in recent weeks. The Supervisory Board considers it essential that everything possible has to be done to regain this trust.

3. The Supervisory Board regards the combat against antisemitism and group-focused enmity in the field of the arts as part of a broader effort in the whole of society. The Supervisory Board reaffirms its expectation that indications of possible antisemitic imagery and the promotion of antisemitism related to the state of Israel be followed up upon while safeguarding the fundamental right to artistic freedom. The Supervisory Board recommends to the shareholders of documenta to enter a process of consultation with scholars from the fields of contemporary antisemitism, German and global contexts, postcolonial studies and the arts. They should take initial stock of the procedures, structures and reception of and around documenta fifteen, recommend drawing lessons and identify the issues that need further academic research. Besides this, they will advise if additional antisemitic imagery should arise. The Supervisory Board deems productive an involvement of the artistic direction in the consultation process and aims to design it conjointly. The Supervisory Board suggests that the finding committee, which has an advisory function vis-à-vis documenta fifteen, should also participate in the process. The Shareholdersʼ Meeting has agreed to this.

4. The Supervisory Board recommends that the Shareholdersʼ Meeting conduct an administrative review of documenta und Museum Fridericianum gGmbH, subjecting both the structures, including competencies and responsibilities, and the processes to scrutiny. This should be done in benchmarking with other essential art exhibitions and with the help of external experts to generate proposals for the further development of documenta und Museum Fridericianum gGmbH as soon as possible after documenta fifteen. This, too, was decided by the Shareholdersʼ” Meeting.

5. The City of Kassel and the State of Hesse are united by the common goal of coming to terms with the misconduct in the area of antisemitism and structural deficits and of doing everything in their power to ensure that documenta retains its unique status as an exhibition of contemporary art in the future. The Supervisory Board advocates that documenta fifteen, as the first documenta curated from the perspective of the so-called “global south” with over 1,500 participating artists, also be valued in its entirety and uniqueness. Because documenta becomes a hub for artists and culture enthusiasts from all over the world every five years, and precisely because it has always been and remains a place of encounter and critical discourse, the Supervisory Board is working together with all those involved to protect documenta in Kassel.

Sotheby’s may be in for a lawsuit after they sold two tables designed by the 20th-century architect Jean Prouvé. Both are thought to have tops made from a substance that mixes asbestos with concrete. The “fibrated Granipoli concrete” was used to manufacture the tables dating from the 1930s. They were created as part of a group of 30 tables used in the canteen at La Pierre Attelée, a seaside summer camp in Saint-Brevin l’Océan, France.

Sotheby’s sold one of the tables last June for $1.6m in a Design sale. The other table sold for $988,000 in December. “I had never heard of (fibrated Granipoli concrete) but quickly deduced that it had to do with fibres being introduced to concrete,” O’Hea a leading conserver told Artnet News. “Seeing that the table which dates to the 1930s, my immediate thought was, ‘That has to be an asbestos product.'” “Sotheby’s is currently working with its scientific research team to identify the material in question,” a representative from Sotheby’s explained to Artnet News, “The object remains in Sotheby’s possession and will be isolated pending the results of analyses.” 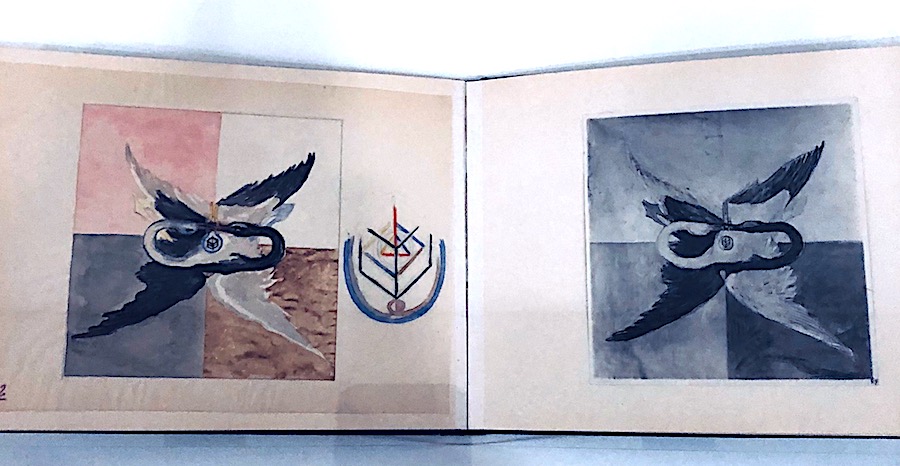 The catalogue raisonné of the abstract pioneer Hilma af Klint is now complete and will be released this Autumn. The series comprises seven volumes, and nearly 1,600 of Hilma af Klint’s works.

Hilma af Klint has taken the art world by storm. Having once been virtually unknown, she is now compared with the greatest modern painters, and her works are considered ground-breaking. Nearly 70 years after her death, the map of early abstract art, both in Sweden and internationally, has been redrawn.

The paintings are presented in the same order as the anthroposophist Olof Sundström numbered them in 1945, based on the artist’s notes. A specially produced slipcase to hold all seven volumes will be available in the autumn of 2022.

“A catalogue raisonné is necessary in order to see the different cycles, motifs and symbols that recur in such an exciting way. If someone really wants to understand how Hilma af Klint’s works function, they need these books,” says Daniel Birnbaum

“When Hilma af Klint bequeathed her work to the future, she did not want to leave the image we would form of it to chance. She was her own archivist, editor and censor. She placed her spiritual work in the centre, in words and pictures. This legacy, there can be no doubt, was most important to her,” writes the art historian Julia Voss.

In addition to the completion of Hilma af Klint – Catalogue Raisonné, the unique Virtual Reality piece The Temple, conceived by Daniel Birnbaum and Kurt Almqvist and directed by Marika Stolpe, will be released in connection with the publication of the seventh and last book. The experience is produced by Acute Art and premieres during Frieze London at KOKO in Camden, 12–16 October. Editors Daniel Birnbaum and Kurt Almqvist.