Kim Jones, the creative director of Dior, has created a new collection of menswear inspired by the Bloomsbury Group painter Duncan Grant 1885 – 1978.

Jones was brought up in Lewes, East Sussex, near Charleston, the country home shared by Grant and the artist Vanessa Bell. The house was a magnet for creatives and intellectuals, including Bell’s sister the writer Virginia Wolfe Artist/curator Roger Fry Publisher Clive Bell, Novelist EM Forester, historian Lytton Strachey and the economist John Maynard Keynes.

“I first went to Charleston when I was 14 years old. It had struck me how modern they all were, each of those individuals involved in Bloomsbury who were attached to Charleston. But, it was primarily how they lived and worked in one place and how intense that connection was,” Jones said. “There are parallels with Mr Dior — and I discovered him too at around the same age,” he told WWD. The collection will be available in 2023. 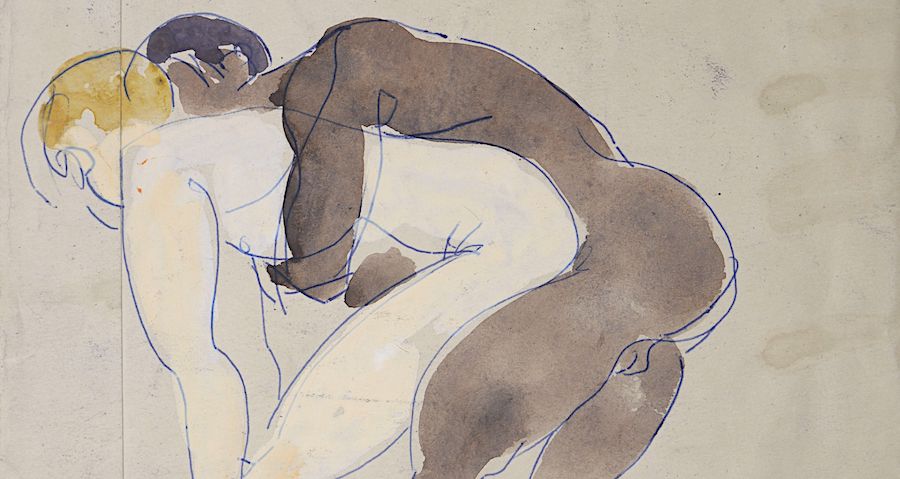 It was thought Le Bas’ sister had destroyed them after he died. But instead, they were rescued and have remained in private hands ever since, a secret collection passed from lover to lover, friend to friend, for 60 years.

Before Coronavirus, the current owner of the works, theatre designer Norman Coates had been discussing potentially returning these works to Grant’s home and studio with Charleston. However, as the owner realised that Charleston, a place of sanctuary and acceptance to Grant, was at critical risk of insolvency, it cemented in his mind the importance of Charleston surviving and these drawings being shared with its visitors:

Charleston is launching a crowdfunding campaign on 15 October 2020, on the eve of the 104th anniversary that Duncan Grant, his boyfriend David “Bunny” Garnett, and friend Vanessa Bell moved to Charleston. With generous donors pledging to match all donations given through the Art Fund Art Happens campaign, the charity hopes once more to be able to reopen its doors to visitors and for them to see the house and its collection, now including this extraordinary gift of Grant’s private drawings.

As a gay man, Grant spent the first 82 years as a criminal. He was born in 1885, seven months before the introduction of the Criminal Law Amendment Act, better known as the Labouchère Amendment, which was rushed through parliament in August 1885 without debate. It criminalised all male homosexual sex in England regardless of any question of consent. Ten years later, it would be used to convict Oscar Wilde. This state of affairs remained until 1967 when the Sexual Offences Act was passed. In his 90s, Grant attended a Gay Liberation Front meeting with his young gay friends.

At the height of the First World War in 1916, Duncan Grant was already regarded as one of Britain’s leading contemporary artists. He had trained as a painter in Paris, France, studying for a time under the artist Simon Bussy.

Grant was a prolific artist who experimented with textiles, ceramics, murals, illustration and theatre design. With the Omega Workshops, they wanted to bring the Post-Impressionist style into the home – to make art a part of everyday life.

Grant was inspired by his contemporaries working in Europe and the colourful, abstract works by artists such as Vincent Van Gogh, Paul Cézanne and Paul Gauguin. He had been introduced to their work by fellow artist and art critic Roger Fry who had organised an exhibition of their work in London and had coined the term ‘Post-Impressionism’.