The ever-timely Elmgreen & Dragset have been honoured with a cameo appearence of the “Prada Marfa” Shop installation on an episode of The Simpsons. The world’s favourite cartoon family passes through the small Texas town to find one of Grandpa Simpson’s World War II companions, Homer stops the car and relieves himself on the artwork. The Danish duo now joins Jasper Johns and Banksy as top artists who have been mentioned on the popular show.

Elmgreen & Dragset are best known for their fourth plinth commission AKA ‘Boy on a Rocking Horse’ which was unveiled in Trafalgar Square in 2012. You can see their current exhibition Elmgreen & Dragset: This is How We Bite Our Tongue at the Whitechapel Gallery until the 13 January. 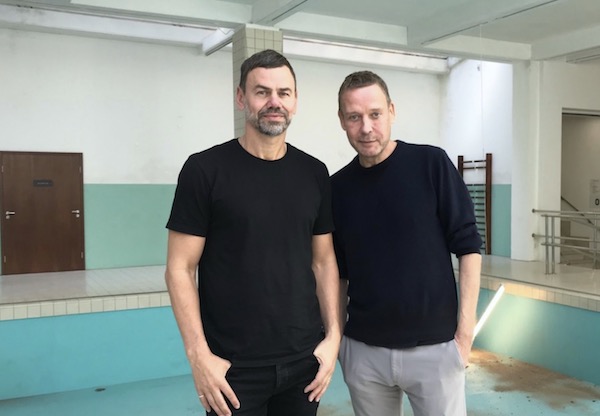 Prada Marfa is a permanently installed sculpture by artists Elmgreen and Dragset, situated 1.4 miles (2.3 km) northwest of Valentine, Texas, just off U.S. Highway 90 (US 90), and about 26 miles (42 km) northwest of the city of Marfa. The installation was inaugurated on October 1, 2005. The artists called the work a “pop architectural land art project.” The sculpture, realised with the assistance of American architects Ronald Rael and Virginia San Fratello,[3] cost $80,000 and was intended to never be repaired, so it might slowly degrade back into the natural landscape. This plan was deviated from when, six days after the sculpture was completed, vandals graffitied the exterior, and broke into the building stealing handbags and shoes.

Designed to resemble a Prada store, the building is made of “adobe bricks, plaster, paint, glass pane, aluminum frame, MDF, and carpet.” The installation’s door is nonfunctional. On the front of the structure there are two large windows displaying actual Prada wares, shoes and handbags, picked out and provided by Miuccia Prada herself from the fall/winter 2005 collection; Prada allowed Elmgreen and Dragset to use the Prada trademark for this work. The sculpture was financed by the Art Production Fund (APF) and Ballroom Marfa, a center of contemporary art and culture.