Emil Nolde (1867–1956) was arguably one of the best known “degenerate artists” working in Germany at the time of the Third Reich. No other artist had as many works confiscated, nor were their works as prominently displayed in the ‘Degenerate Art’ exhibition of 1937/38.

Nolde was a known Nazi party member, but now he has been outed as a committed anti-semite

However, a little known fact about Nolde’s darker side has been revealed in a new exhibition at Hamburger Bahnhof, Berlin, 12 April-15 September. Hundreds of personal letters prove that Nolde was both a Nazi Party member and that he remained loyal to the regime until the end of the war.

The art critic Adolf Behne underlined Nolde’s special status on the occasion of the artist’s eightieth birthday in 1947, by pointedly referring to him as a “degenerate ‘degenerate’”. It has long been known that Emil Nolde was a known Nazi party member, but now he has been outed as a committed anti-semite. No previous exhibition has thoroughly examined how this relates to Nolde’s art, or how the historical circumstances during National Socialism affected his artistic production. 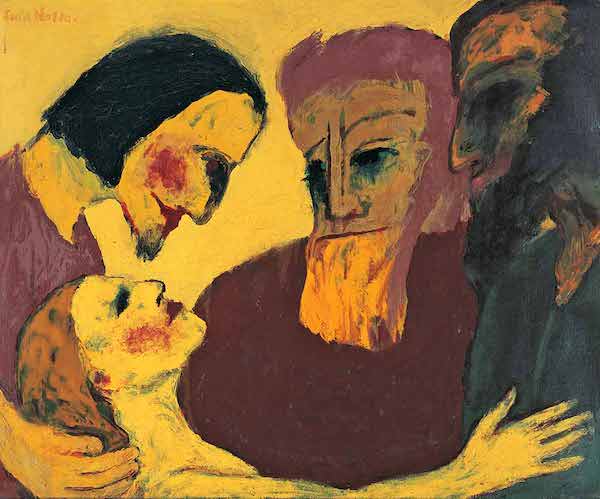 The exhibition Emil Nolde – A German Legend. The Artist during the Nazi Regime is based on the results of a multi-year academic research project which for the first time was able to analyze the extensive holdings of the Nolde estate in Seebüll, uncovering so much new material that the conventional Nolde narrative must be revised. Thus, for example, the exhibition will present the famous “Unpainted Pictures” – the small-format watercolours Nolde was reputed to have secretly painted at Seebüll during his official ban – in an entirely new light, explaining them as part of the long-standing practice of self-stylisation.

Over 100 new originals shown. The exhibition presents over 100 originals, some of which have not previously been confirmed, with references to Nolde’s writings and in the historical context of their creation, to reveal the multi-layered relationships between paintings, the artist’s self-presentation, his ostracism, and development of his legend.

What impact did the ‘Third Reich’ have on Emil Nolde’s artistic work? To what extent do some of his works, such as his depictions of mythic sacrificial scenes or ‘Nordic’ people, correspond with his sympathies for the Nazi regime? What effects did Nolde’s defamation and professional ban have on his artistic practice and political outlook? Moreover, how did the myths about Nolde develop in the post-war period?

The centrepiece of the exhibition is a reconstruction of the ‘painting gallery’ in Nolde’s studio house in Seebüll, a display of paintings and watercolours just as the aging artist himself arranged them during the wartime winter of 1941/42.

The exhibition is made possible through close collaboration with the Stiftung Seebüll Ada und Emil Nolde which provides the majority of loans.

To accompany the exhibition, a richly illustrated volume of essays and pictures (also in an English edition), as well as a separate volume with a timeline and more than 100 documents, will be published.

Der Brücke Painters in the Nazi Period at the Brücke-Museum In parallel, the Brücke-Museum organises the exhibition Escape into Art? The Brücke Painters in the Nazi Period (April 14th to August 11th, 2019) which deals with the artistic practices of Erich Heckel, Max Pechstein and Karl Schmidt-Rottluff as well as their situation during the ‘Third Reich’. Visitors of both exhibitions will be able to situate the case of Emil Nolde into a broader context by considering the art and careers of his former Brücke colleagues (and vice versa).

The exhibition will take place in what is known as the ‘Neue Galerie’. The ‘Neue Galerie’ in Hamburger Bahnhof is serving as an annex for the Neue Nationalgalerie until its renovations are complete. Temporary exhibitions consisting of excerpts from the museum’s collection of early twentieth-century art are presented here. The ‘Neue Galerie’ opened with “The Black Years. Histories of a Collection: 1933–1945” (2015), and then presented exhibitions on Ernst Ludwig Kirchner (2016), Rudolph Belling (2017) and Otto Mueller (2018).