The Max Mara prize 2020 has been awarded to Emma Talbot. The award supports UK-based female artists who have not previously had a major solo exhibition. Awarded in alternate years since 2005, it is the only visual art prize of its kind in the UK. As the winner Talbot will spend six months in Italy on a bespoke residency planned for later this year*, creating a new body of work to be shown in 2021 first at the Whitechapel Gallery and then at the Collezione Maramotti, Reggio Emilia, Italy.

Iwona Blazwick, OBE, Director of the Whitechapel Gallery, announced Talbot as the eighth winner of the Max Mara Art Prize for Women at a ceremony held at Whitechapel Gallery, London. She was chosen from a shortlist including Allison Katz, Katie Schwab, Tai Shani, and Hanna Tuulikki, by a panel of art-world experts comprising gallerist Florence Ingleby, artist Chantal Joffe, collector Fatima Maleki and art critic Hettie Judah, chaired by Blazwick. 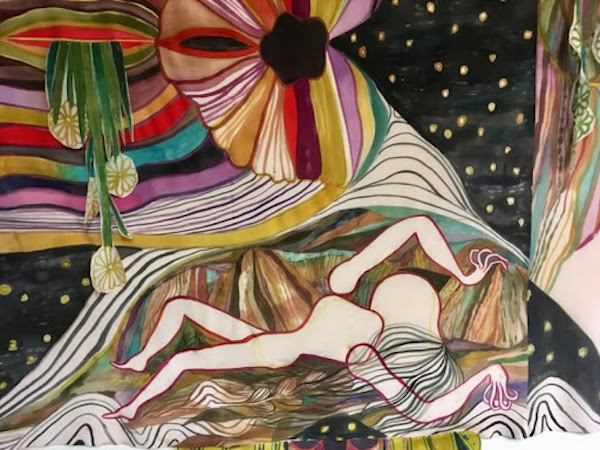 Emma Talbot (b. 1969, UK) lives and works in London. Her work in drawing, painting, installation and sculpture explores the inner landscape of personal thought, emotion and narrative. These individual subjectivities are then cast into wider narratives, addressing prevalent contemporary concerns. Her work is often hand-drawn or painted onto silk or other textiles, and incorporates her own writing or quotes from other sources. It explores the personal as political, social politics, gender, the natural world, and our intimacy with technology and language.

Talbot’s winning proposal for the Max Mara Art Prize for Women questions deeply rooted positions of power, governance, attitudes to nature and representations of women, through an acutely personal lens. It takes as a starting point Gustav Klimt’s painting Three Ages of Woman (1905), which features a naked elderly woman standing in apparent shame. The painting is housed at the Galleria Nazionale d’Arte Moderna in Rome and Talbot will have the opportunity to see it first-hand during her residency in Italy. In her work for the Prize, Talbot intends to animate the figure of the older woman as someone with agency, who overcomes a series of trials similar to The Twelve Labors of Hercules. Through her modern-day trials, Talbot will invest the woman with the potential to reconstruct contemporary society, countering prevalent negative attitudes to ageing.

During her bespoke six-month Italian residency, organised by the Collezione Maramotti and to be finalised later this year, Talbot will spend time in Rome, Reggio Emilia and Sicily to research classical mythology, textile craftsmanship and permaculture.

Beginning in Rome, she will be hosted for two months by prestigious research academy The British School at Rome. Particularly focusing on Herculean myths, she will research designs on Etruscan Pottery which are powerful conveyors of classical mythology.

Textiles are central to Talbot’s work and her stay in Reggio Emilia will offer a unique opportunity to acquire new skills in production. Here she will work with local craftspeople to learn Intarsia, a form of jacquard knitting used to create patterns with multiple colours, a technique which she will use in her final work. Thanks to several side trips to Milan, Como, Florence and Prato, she will also research traditions of painting on silk, primarily amongst Italian fashion houses and particularly focusing on futuristic 1960s prints.

In Catania, Sicily, Talbot will spend time exploring layers of history: visiting ancient archaeological sites and the volcanic terrain to inform a depiction of a landscape that may feature in the final work. She will learn about permaculture, a practice central to much Sicilian agriculture, which offers sustainable and ethical ways of living with the land. Throughout her time in Catania, she will gather material to immediately respond to in a studio, developing work alongside her research.

Emma Talbot said: “This prize comes at a crucial point that seems incredibly timely for me, as I have only recently began to focus fully on my own work, having for many years taken on teaching roles to support my family, as a single parent. The Max Mara Art Prize for Women will help me make the most of this major step. Just at the perfect time, this supportive and amazing opportunity to concentrate totally on my work, and undertake extended first-hand research, will be life-changing.”

Iwona Blazwick said: “Emma Talbot makes radiant drawings and polychromatic sculptures on an epic scale; and combines word and image to express the lyricism and the pain of subjectivity. We are all excited to see how the experience of Italy will impact on the visionary aesthetic of this year’s Max Mara Art Prize winner!”

The Max Mara Art Prize for Women in collaboration with the Whitechapel Gallery is a biannual award established in 2005. It is the only visual art prize for women in the UK and aims to promote and nurture female artists, enabling them to develop their potential with the gift of time and space. The winner is awarded a six-month Italian residency tailored to fit the artist and their winning proposal for the Prize. During the residency, which is organised by Collezione Maramotti in collaboration with Max Mara and the Whitechapel Gallery, the artist has the opportunity to realise an ambitious new project which is presented in major solo exhibitions at the Whitechapel Gallery in London and Collezione Maramotti in Reggio Emilia, Italy. The prize is open to women artists living and working in the United Kingdom who have not previously had a major solo survey exhibition. The partners of the prize are Max Mara, Whitechapel Gallery and Collezione Maramotti who collaborate on each phase of the prize. Each year a jury, chaired by Whitechapel Gallery Director, Iwona Blazwick, and including a gallerist, critic, artist and collector, agree on a shortlist of five artists before the winner is decided based on the artists’ proposals. The Max Mara Art Prize for Women was awarded the British Council Arts & Business International Award in 2007 and has enabled winning artists to take major steps in their careers. Previous winners of the Max Mara Art Prize for Women are:
Helen Cammock (2017 – 19) – Cammock (b. 1970) presented a film, a series of vinyl cut prints, a screen-printed frieze and an artist’s book exploring the idea of lament in women’s lives across histories and geographies in her exhibition Che si può fare. Since winning the Max Mara Art Prize for Women she was awarded the Turner Prize 2019 together with Lawrence Abu Hamdan, Oscar Murillo and Tai Shani. Che si può fare was on display at Whitechapel Gallery London, United Kingdom from 25 June – 1 September 2019 and Collezione Maramotti, Reggio Emilia, Italy from 13 October 2019 – 8 March 2020

Emma Hart (2015 – 17) – Hart’s (b. 1974) large-scale installation, Mamma Mia! (2016) consists of a family of large ceramic heads, whose interior space is filled with vivid patterns, designed and hand-painted by Hart after researching the designs and practice of the Italian tradition of maiolica pottery. This project represents the culmination of an investigation into pattern, from visual patterns to patterns of psychological behaviour.

Corin Sworn (2013 – 15) – Sworn (b.1976) created a work drawing from the Commedia dell’Arte improvised plays originating in 16th century Italy. The work was on show at Collezione Maramotti, Reggio Emilia, Italy until 28 February 2016. Sworn was awarded the Leverhulme Prize 2015 which recognises the achievement of outstanding researchers whose work has already attracted international recognition and whose future career is exceptionally promising. o Laure Prouvost (2011 – 13) – Laure Prouvost created an ambitious new large-scale installation for her Max Mara Art Prize exhibition. In 2013 she was awarded the Turner Prize. Her project Deep See Blue Surrounding You was presented in the French pavilion for the 2019 Venice Biennale.
Andrea Büttner (2009 – 11) – Part of Andrea Büttner’s work created for her Max Mara Art Prize exhibition, The Poverty of Riches, and titled Untitled (Paintings) (2011) was included in the Whitechapel Gallery’s landmark exhibition Adventures of the Black Square in 2015.

Hannah Rickards (2007 – 09) – The prize enabled Hannah Rickards to realise an ambitious new work she had been researching before winning the Prize. Rickards was also awarded the Leverhulme Prize in 2015 and had a major exhibition at Modern Art Oxford in 2014.
Margaret Salmon (2005 – 07) – Margaret Salmon travelled to Italy and created a triptych of black and white films exploring themes of motherhood. She went on to exhibit at the Venice Biennale in 2007.