A temporary export bar on a painting depicting the Russian dancer Vaslav Nijinksy by the English artist Glyn Philpot has been placed by Arts Minister Rebecca Pow, in a bid to keep it in the country.

‘Nijinksy before the Curtain’ is at risk of going abroad unless a buyer can be found to match the asking price of £450,000 plus VAT. However, the painting seems to have an unrealistic price tag for a work by this artist. As far as we can ascertain from auction records, it would be the most expensive Philpot ever sold. Another canvas from Noel Coward’s collection achieved £250k in 2015. Perhaps, it was the celebrity provenance that pushed the price as most are in the £30k – £80k price range. The Nijinksy painting is not one of Philpot’s best. It appears to be more of a sketch, rather than a finished painting. It is void of many of the characteristics that made Philpot’s work important to British Modernism. The painting is unlikely to remain in the country unless the asking price is drastically reduced.

Philpot (1884 – 1937) was an English painter who specialised in male portraiture, especially the male nude. Among his subjects were the poet Siegfried Sassoon and the operatic tenor Vladimir Rosing. The artist is highly regarded by the LGBTQ+ community having examples of his work in the ‘Queer Britain’ exhibition at Tate Britain last year. 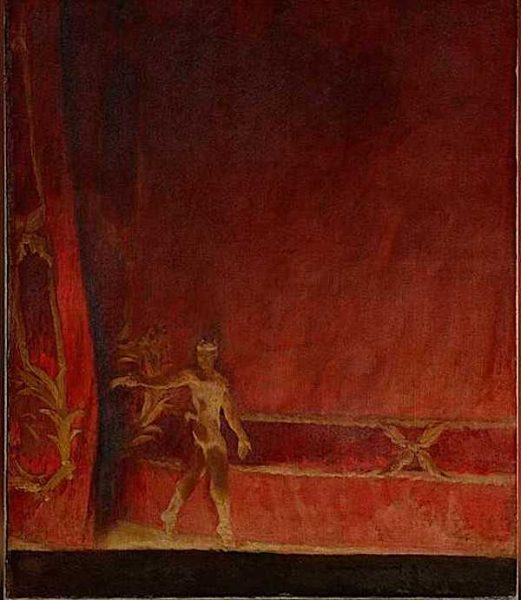 The painting in question depicts the Russian ballet dancer Vaslav Nijinsky taking a curtain call after a performance of ‘L’Après-midi d’un faune’. The work shows Nijinksy in costume as the faun on stage at the Royal Opera House in Covent Garden, London, where he performed in the UK premiere of the ballet in 1913.

Vaslav Nijinsky, the greatest male dancer of his generation and also a highly inventive choreographer, was born in Kiev in 1890 to Polish parents. He was brought up in Russia and trained at the prestigious Imperial School of Dancing in St. Petersburg. In 1909, Nijinsky joined the Ballets Russes where he became the principal male dancer and rose to international stardom.

The Ballets Russes had a profound effect on British art and culture, as, before their visit in 1913, there was no national school of ballet or any permanent companies in Britain, unlike many other European countries. This work is a unique representation of Vaslav Nijinksy on stage in London and represents a pivotal moment in British cultural history.

Arts Minister Rebecca Pow said: Nijinksy is one of the most famous dancers of the twentieth century, and his impact on our cultural history is vast. Thousands of children across the UK attend dance lessons every day, and this is due in no small part to Nijinsky and the Ballets Russes introducing ballet to the British cultural scene. I hope that a buyer can be found to keep this critical work in the country.

The Minister’s decision follows the advice of the Reviewing Committee on the Export of Works of Art and Objects of Cultural Interest (RCEWA). Representations of Nijinsky in British collections are scarce, and the committee felt that this work was of national importance to the study of dance.

The RCEWA made its recommendation on the grounds of the painting’s outstanding significance for the study of the history of dance.

This painting is a highly significant work of art in its own right, but perhaps more than that, it captures a seminal but fleeting moment in the history of dance. It shows Nijinsky, arguably the greatest dancer the world has seen, in a rarely-depicted curtain call for the first ballet which he choreographed himself and at precisely the moment when he was taking the British stage by storm with the Ballets Russes. – Pippa Shirley

It is a striking and powerful image, which tells us much about the impact of a cultural phenomenon on the artistic life of the country at the time, influencing the public, artists and patrons alike.

The decision on the export license applications for the painting will be deferred until 18 October 2019. This may be extended until 18 January 2020 if a serious intention to raise funds to purchase it is made at the recommended price of £450,000 plus VAT.