On the third anniversary of the tragic fire which took seventy-two lives in the Grenfell tower block in West London, Artlyst thought it a good time to highlight an excellent project that the Turner Prize-nominated collective Forensic Architecture has put together using mapping technology.

In the early hours of 14 June 2017, a fire in the kitchen of a fourth-floor flat in the Grenfell Tower block erupted from an electrical fault in a Hotpoint refrigerator. The fire quickly caught onto the cladding rapidly engulfing a membrane of cladding manufactured by Arconic a multinational aluminium company that has spent £30m defending its role in the disaster. The Guardian says; Arconic’s outlay on lawyers dwarfs the amount spent on panels found to be the main cause of fire spread. So far no one has been charged or held accountable for the fire. 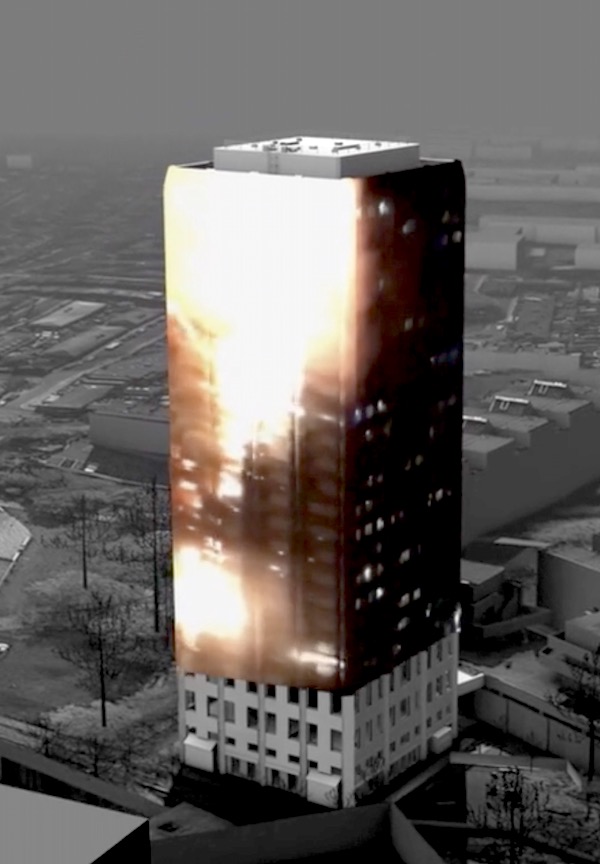 The Forensic Architecture project includes a real-time video collaging together footage taken by the public on the night and morning of the fire. Researchers have used groundbreaking technology to develop an interactive 3D model reconstructing the Grenfell Tower inferno.

FA continues to support the BSR (Bereaved, Survivors, and Relatives) and their representatives in a number of ways in their ongoing pursuit of accountability and transparency in relation to the Grenfell Tower fire, in the context of the Grenfell Tower Inquiry and related legal avenues.

By bringing together publicly-available information about the progress of the fire within the tower and around its exterior, Forensic Architecture is building a powerful and freely-available resource by which the community and members of the public may explore and better understand the events of the night of the fire.

The unfolding catastrophe was captured live by hundreds of Londoners on their cameras and smartphones. Every video of the fire captured that night is a unique piece of evidence, containing unique information.

FA have collected hundreds of these pieces of evidence and, using a technique known as ‘projection mapping’, applied those videos to an architectural model of Grenfell Tower to create a continuous ‘3D video’ of the fire. This open-ended project continues to grow as further information about the night of the fire enters the public domain. In order to create a comprehensive record. FA has gathered as much available video footage from the night of the fire as possible.

They invite members of the public to submit their video footage of the fire at www.grenfellmediaarchive.org

Forensic Architecture (FA) is a research agency, based at Goldsmiths, University of London. We undertake advanced spatial and media investigations into cases of human rights violations, with and on behalf of communities affected by political violence, human rights organisations, international prosecutors, environmental justice groups, and media organisations.

FA investigates state and corporate violence, human rights violations and environmental destruction all over the world. Our work often involves open-source investigation, the construction of digital and physical models, 3D animations, virtual reality environments and cartographic platforms. Within these environments, they locate and analyse photographs, videos, audio files and testimonies to reconstruct and analyse violent events. They also use our digital models as tools for interviewing survivors of violence, finding new ways to access and explore memories of trauma. The FA team also investigates human rights violations around the world.