The unveiling of the Fourth Plinth commission, a  giant soft-serve dollop of whipped cream topped with a cherry, a fly and a drone by Heather Phillipson has been postponed due to the current public health crisis. The sculpture in Trafalgar Square central London was to replace The Invisible Enemy Should Not Exist by Michael Rakowitz for the next year two years.

London’s Deputy Mayor for Culture and the Creative Industries, Justine Simons OBE, has announced that the installation of the next sculpture on the Fourth Plinth in Trafalgar Square has been postponed due to the ongoing impact of coronavirus. THE END by Heather Phillipson was due to be installed on the Fourth Plinth on March 26, but will now be unveiled at a later date. 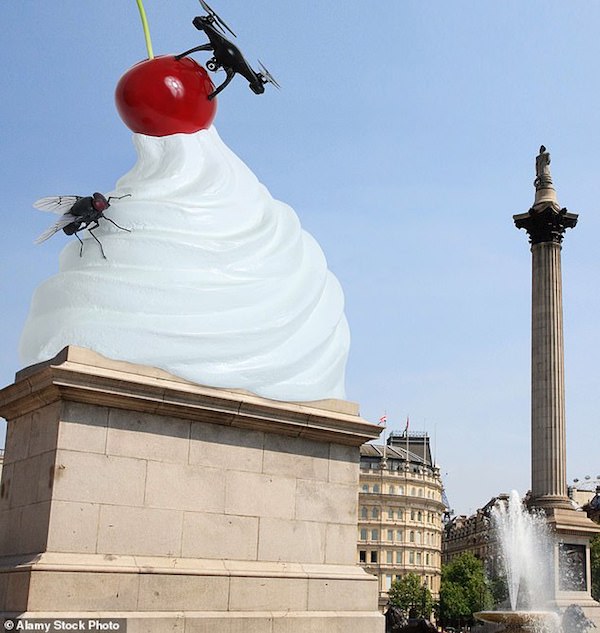 The Deputy Mayor for Culture and Creative Industries, Justine Simons OBE, said: “It is important that we all follow the Government’s advice to stop all non-essential contact and not hold large gatherings. We will wait to unveil the next Fourth Plinth commission so that Londoners and visitors can properly enjoy it.

“Meanwhile, we will support all the individuals and businesses involved in the commissioning, planning and operation of this installation during these challenging times.”

A giant soft-serve dollop of whipped cream topped with a cherry, a fly and a drone by Heather Phillipson will grace the Fourth Plinth in Trafalgar Square central London for the next year two years.

The End is exuberant, uneasy and suggests hubris and impending collapse.  Heather Phillipson’s sculpture, titled THE END, will be unveiled competing with the Yodas and pigeons. Its drone will transmit a live feed of the square, which can be watched on a dedicated website.

THE END by artist Heather Phillipson will be the 13th sculpture since the commissioning programme began in 1998, following on from The Invisible Enemy Should Not Exist by Michael Rakowitz, which is currently in situ.

Exuberant, uneasy and suggesting hubris and impending collapse, THE END responds to Trafalgar Square as a site of mass gathering, celebration, protest and personal broadcast, shared with other forms of creaturely life. The live feed of Trafalgar Square picked up by the drone’s camera is visible to passers-by on a dedicated website, giving a sculpture’s eye perspective. The work is set to occupy the plinth until March 2022.

Justine Simons OBE, Deputy Mayor for Culture and Creative Industries, said: “This is an outstanding new work by Heather Phillipson. At first, it seems playful, but this sugary swirl has an unexpected twist, as a drone’s camera will be watching us watching it. It will spark a conversation about contemporary art and help us think about the Fourth Plinth in a whole new way, continuing its legacy of putting world-class contemporary culture in the heart of London.”

Heather Phillipson works across video, sculpture, web projects, music, drawing and poetry. She has been selected as the next artist for the Duveen Galleries commission at Tate Britain (16 June -18 October 2020). Her recent solo projects include new commissions for Sharjah Biennial 14 and the Martin Gropius Bau, Berlin (both 2019), Art on the Underground’s flagship site at Gloucester Road, online work for the Museum of Contemporary Art Chicago and a major solo show at BALTIC Centre for Contemporary Art (all in 2018). Phillipson received the Film London Jarman Award in 2016, the European Short Film Festival selection.