London – The Artists shortlist (2010/2011) for the next commission to go on the Fourth Plinth in Trafalgar Square has now been revealed and the designs will be unveiled later today. Brian Griffiths, Allora & Calzadilla, Hew Locke Elmgreen & Dragset, Katharina Fritsch, and Mariele Neudecker. Are the winners of this stage of the competition.The artists have now produced a maquette (a scale model) of their proposed work, which will be on display in an exhibition in the crypt of St Martin in the Fields from 19 August 2010.The chosen artist will be announced by the Mayor Boris Johnson early next year, with the artwork they installed after the current work, Nelson’s Ship in a Bottle by Yinka Shonibare MBE has been removed at the end of 2011.

Ekow Eshun, Director of the ICA (Institute of Contemporary Art) and Chair of the Fourth Plinth Commissioning Group, said: ‘The Fourth Plinth Programme has become one of the most high-profile public art commissions in the UK and has established an international reputation. The Commissioning group is excited by this strong shortlist, which represents leading artists from different nations. We look forward to revealing their proposals for the plinth to the public next month.’

The Fourth Plinth Programme is funded by the Arts Council England and the Mayor of London who  sees new artworks being selected for the vacant plinth in a rolling programme of new commissions. A key element of the Fourth Plinth Programme is to involve people in the debate about public art. The public will have the opportunity to comment on the shortlisted proposals on cards at the exhibition and via the website following the unveiling of the proposals.

Moira Sinclair, London Executive Director of Arts Council England said: ‘The Fourth Plinth commissions always generate excitement and debate about contemporary art – and this shortlist is set to continue this tradition as our partnership with the Mayor’s Office enters its ninth year. Delivering high quality art with audiences of millions is at the heart of what the Fourth Plinth does, and it represents what can happen when public agencies work together with a joint aim. We wish the best of luck to all the artists and look forward to finding out what the successor to Yinka’s magnificent Ship in a Bottle will be.’

Jennifer Allora, born in 1974 Philadelphia, USA and Guillermo Calzadilla born in 1971 in Havana, Cuba, live and work in San Juan, Puerto Rico. Through sculpture, photography, performance, sound and video, their work explores mark making, traces, survival and the relationship between the human and the animal. Most recently, they have created a series of works that explore the interplay between militarism and sound in the context of today’s global state of war. They have had solo shows at the Whitechapel Gallery, London (2007), Serpentine Gallery (2007), Stedelijk Museum, Amsterdam (2008), Haus der Kunst München, Munich (2008) and the Temporäre Kunsthalle Berlin (2009) and have a forthcoming exhibition at the Lisson Gallery, London, UK in October 2010. 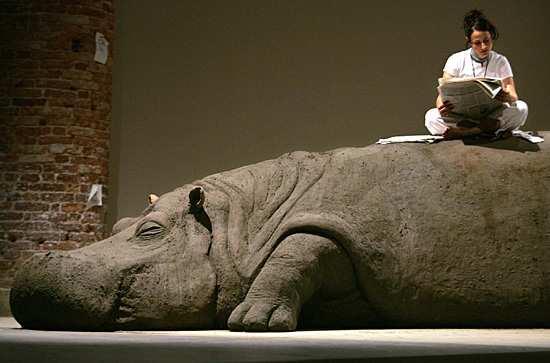 Based in London and Berlin, Michael Elmgreen and Ingar Dragset have worked together as an artist duo since the mid-1990s. Their work explores issues relating to contemporary modes of living and investigates how these are reflected in both the everyday designs that surround us and in our urban landscapes. Major exhibitions include The Collectors at The Nordic and Danish Pavilions for the 53rd Venice Biennial in 2009, a survey show at MUSAC in León, Spain (2009), solo shows at Serpentine Gallery (2006) and Tate Modern in London (2004); The Power Plant in Toronto (2006); Malmö Konsthall (2007); Portikus, Frankfurt (2003) and Kunsthalle Zürich (2001). They are currently showing at the New Décor at the Hayward Gallery in London and will participate in the 3rd Singapore Biennial in 2011. Born in 1956 in Essen, Germany, Katharina Fritsch lives and works in Dusseldorf.  Her sculpture plays on the tension between reality and apparition, between the familiar and the surreal or uncanny. Her iconic images, installations and sound works imprint themselves of the viewers mind. Singular forms are often used repeatedly to create a psychotic proliferation. She represented Germany in the 46th Venice Biennale and has had many solo exhibitions including Dia Center for the Arts, New York (1993), SF MOMA (1996), Museum fur Gegenwartskunst, Basel (1997), Tate Modern, London (2001), K21, Dusseldorf (2002) and a survey exhibition at Kunsthaus Zurich and Deichtorhallen Hamburg (2009). Katharina Fritsch is represented by Matthew Marks Gallery, New York and White Cube, London. 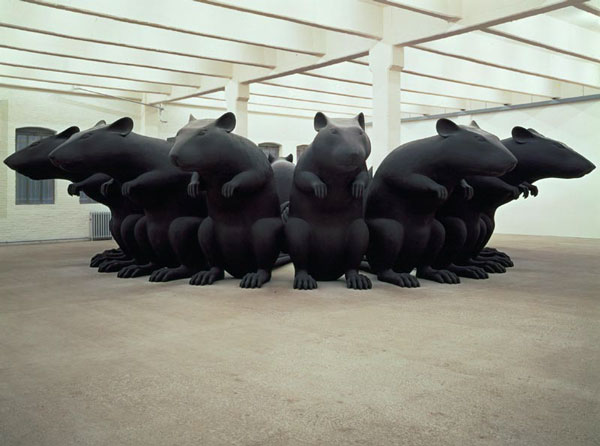 Brian Griffiths studied at Goldsmiths College in the late 90’s. His sculptural works, three dimensional collages and installations have qualities of overt theatricality and pathos. His work has be Hew Lockeen exhibited extensively in the UK and internationally. He has had solo shows at Camden Arts Centre, Arnolfini, A Foundation Vilma Gold, Galeria Luisa Strina and internationally has shown work at numerous museums including The Groninger Museum in the Netherands, The Mattress Factory Museum in Pittsburgh, CAPC museum in Bordeaux, , Mostra D’Arte Contemporanea in Milan and Belém Museum of Modern Art, Brazil. Brian Griffiths is represented by Vilma Gold, London and Galeria Luisa Strina, São Paulo. He is presently lecturer in Fine Art at the Royal Academy Schools, London. He was born in Stratford-upon-Avon in 1968 and lives and works in London. 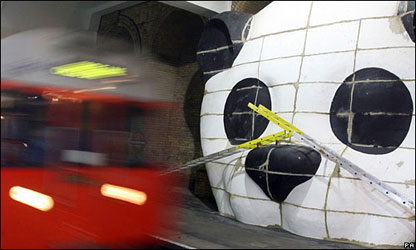 Hew Locke was born Edinburgh in 1959 but lived in Guyana from 1966 to 1980. He returned to the UK to study BA Fine Art at Falmouth and MA Sculpture at the Royal College of Art. He lives and works in London, exhibiting extensively in the UK and abroad.  British group and solo shows include at Hales Gallery, Tate Britain as part of British Art Week, The Baltic as part of BAS6, The V&A, The ICA, The New Art Gallery Walsall, Chisenhale Gallery, The Bluecoat Gallery and Rivington Place.  Internationally Locke’s work has been exhibited at The Thessaloniki Biennale of Contemporary Art, The San Juan Triennal, The Guangzhou Triennial, The Brooklyn Museum, The Luckman Gallery LA, Atlanta Contemporary Arts, The Museum of Art and Design, New York, The Power Plant, Toronto, and the Palacio de Abrantes, Spain. Locke’s work is included in the collections of The Tate Gallery, The Arts Council, The Brooklyn Museum, The Kemper Museum Kansas City, The New Art Gallery Walsall, The V&A, The British Museum, The Henry Moore Institute and The Government Art Collection, amongst others.

Born in 1965 in Düsseldorf, Germany, Mariele Neudecker lives and works in Bristol. Neudecker uses a broad range of media including sculpture, installation, film and photography. Her practice investigates the formation and historical dissemination of cultural constructs around the natural world, focusing particularly on landscape representations within the Northern European Romantic tradition and notions of the Sublime. Central to the work is the human interest and relationship to landscape and its images used metaphorically for human psychology.Mariele Neudecker has shown widely internationally, notably in Biennales in Japan, Australia and Singapore, also solo shows in Ikon Gallery, Tate StIves and Tate Britain. This year Mariele Neudecker has presented a solo exhibition at Galerie Barbara Thumm, Berlin, won the Ludwig Gies Preis for her participation at Triennale Fellbach 2010 (Germany), made a new commission for Extraordinary Measures, Belsay Hall, Castle and Gardens, Newcastle upon Tyne (UK) and has been invited to spend three month at the Headlands Centre for the Arts, San Francisco (USA). She is represented by gallery Barbara Thumm, Berlin.