Paul Carey- Kent is no stranger to Frieze London. Here he recaps his top choices from this year’s mega fair and comes up trumps with a selection, some of which disappeared within the first hour of the fair.

Art, typically, is useless. Otherwise, we suspect it’s design, though there is of course an art to that. Among the trends at this year’s Frieze (dance, work for children, smiley faces, spaciousness…) there were plenty of works which rubbed this commonplace in: they were explicitly useless.

Roger Hiorns famously filled a flat with blue copper sulphate crystals, and has grown them onto other objects, notably  engines. Those examples are explicit about uncontrollable aspects of the chemical reaction set in motion. His dazzlingly hidden clock is a more measured, but that’s simply how it worked out. Just so, even if we think we control time, it’s actually the other way around. And it proceeds without us: perhaps the hands are still turning in there. 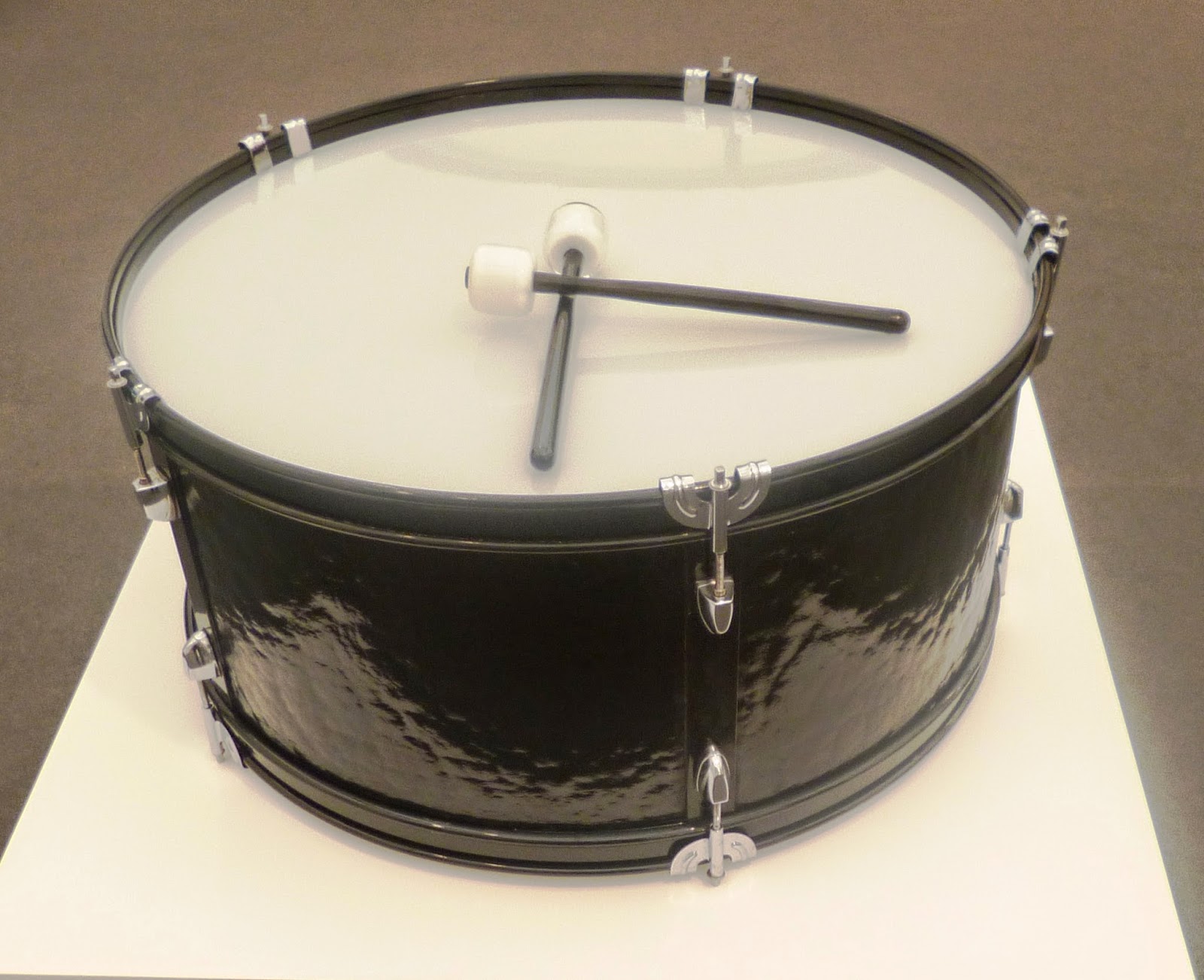 Cornelia Parker is an unusually clear explicator of her own work, so let me piece together some quotes: ‘I prefer things when they’re fractured for some reason. A very recognisable object can become mysterious and more open to interpretation when it’s in pieces…  And brokenness is very much a part of society. Civilisations fall, for instance.  The premonition that this fragile material will break is the inspiration behind the glass drum I call Decoy, as it lures people in to want to beat the drum, whereupon it will shatter. The drumroll will be falling glass.’ 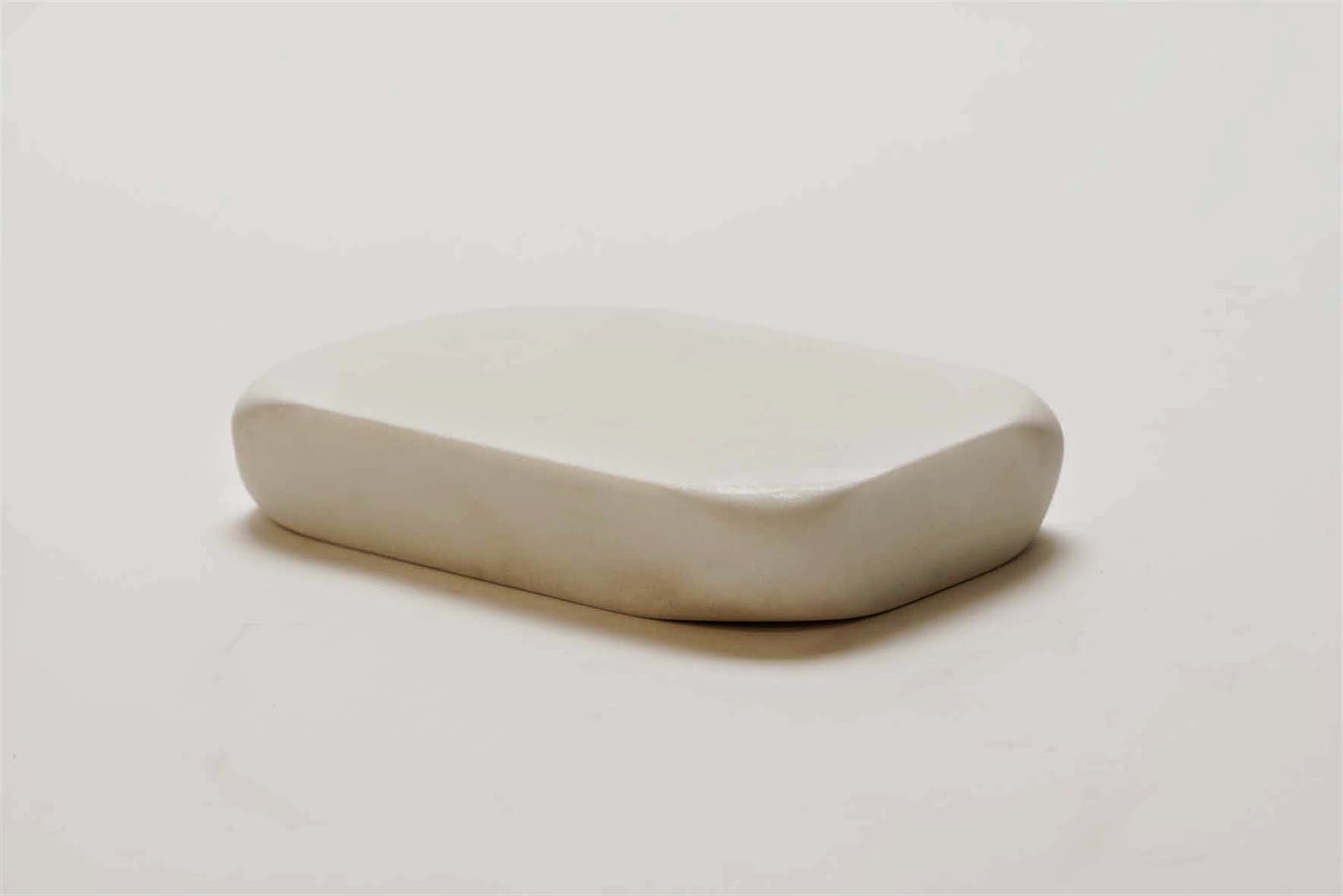 The playful Brazilian artist   José Damasceno has a high London profile with the opening of his Art Angel project at Holborn Library. That’s more haunted by than revelatory of its eponymous Plot, making one suspect that this elegantly minimalist  sculpture is meant to go beyond its jocular ‘unsuitable materials’ gambit. Marble is the stone of memorials, and the obvious memorialisation from recent South American history would be of those ‘disappeared’ under dictatorships. But can the past really be erased? 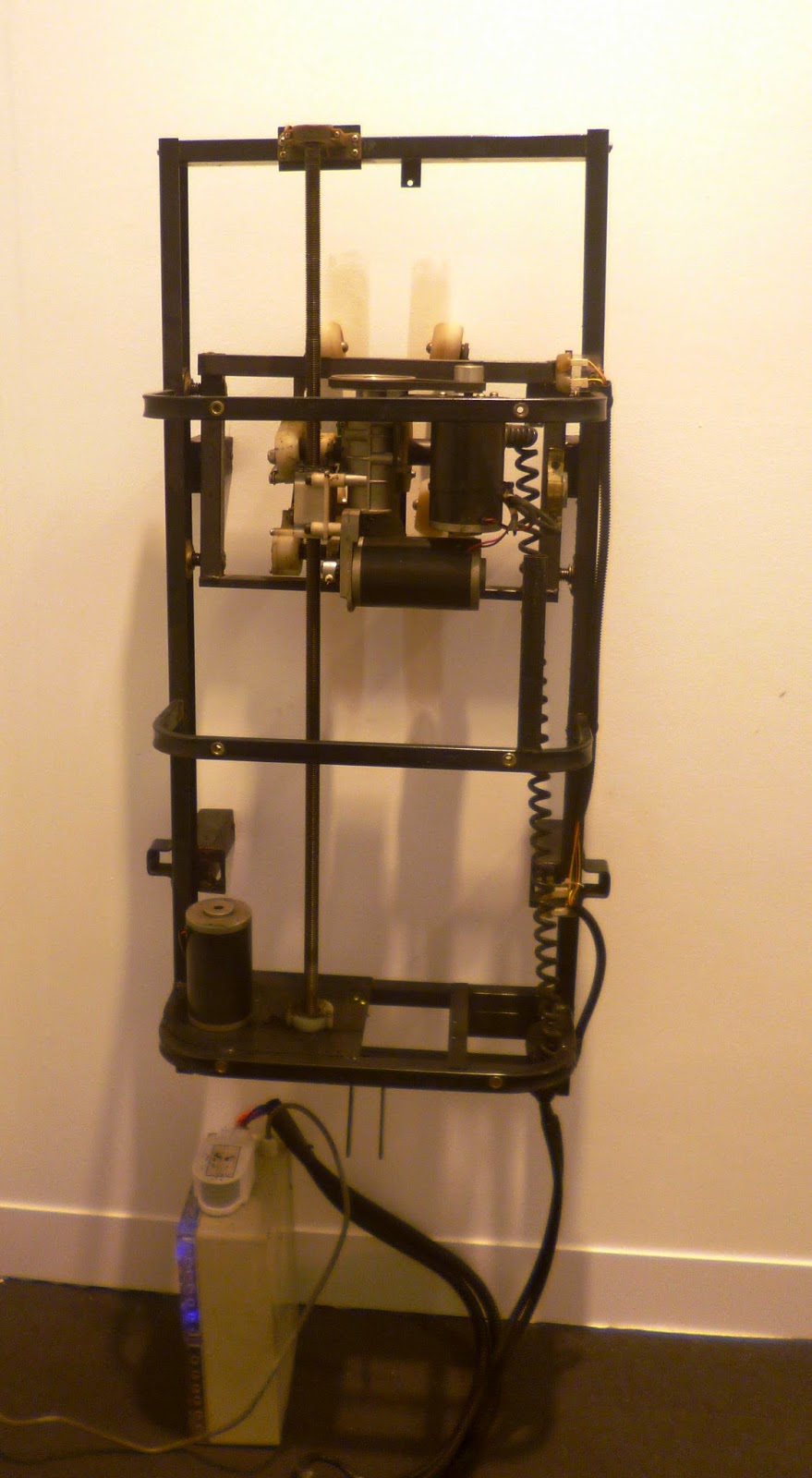 This is the working mechanism of a massage chair stripped of its upholstery: you could watch the pressure pads ease themselves down then shudder their way up, with a compelling whirr, against the back of the wall – and wonder how pleasant the uncushioned sensation would be. Shanghai-based Yang Zhenzhong often brings foreboding into his wide range of work, for example his 2007 film of people saying ‘I will die’ – so perhaps it’s no surprise that this skeletal form resembles an electric chair. 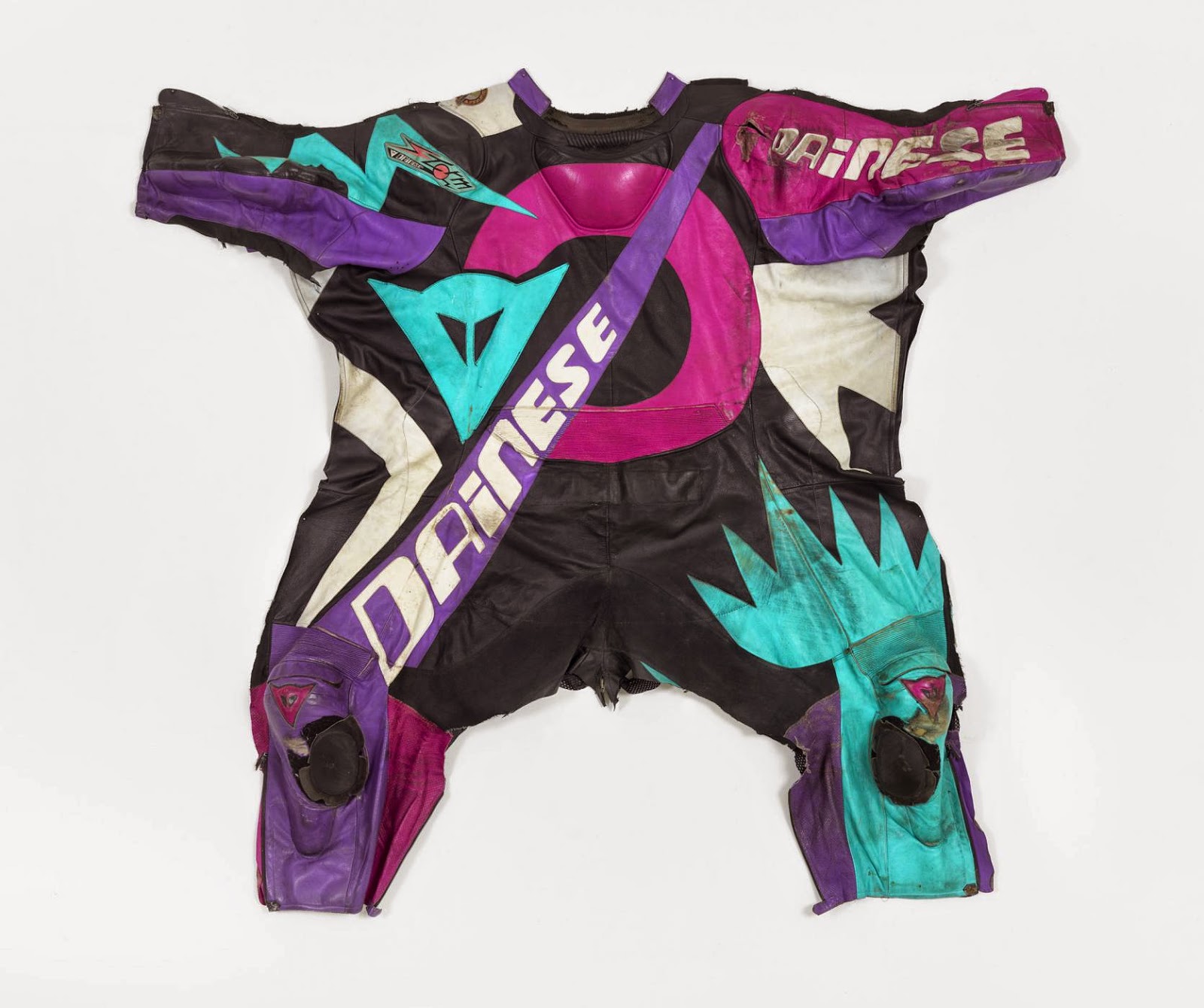 Cologne-based Alexandra Bircken – best-known for incorporating knitting with found items – is a motorcycling enthusiast. At Frieze, she re-purposed sets of racing leathers as paintings of sorts, complete with the sculptural protectors of knees and elbows. Her intervention is to slit the leathers open, ending its usefulness, then play like a carcass bearing the traces of competitive action. 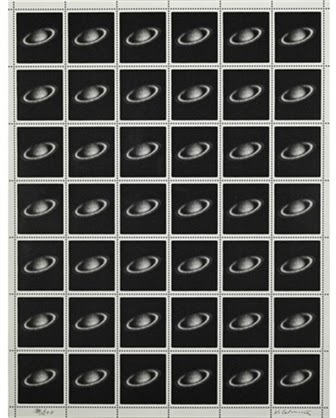 Celmins’ ability to conjure intensity on a small scale makes her a natural choice to design stamps. She should be asked, but meantime took it on herself to make a lithographic edition of 200 sheets of 42 stamps showing Saturn. Though complete with perforations, they’re not accepted by any postal system. Mind you, though cheap by Frieze standards at around £50 per stamp, they would – even by current standards – make for expensive letters. 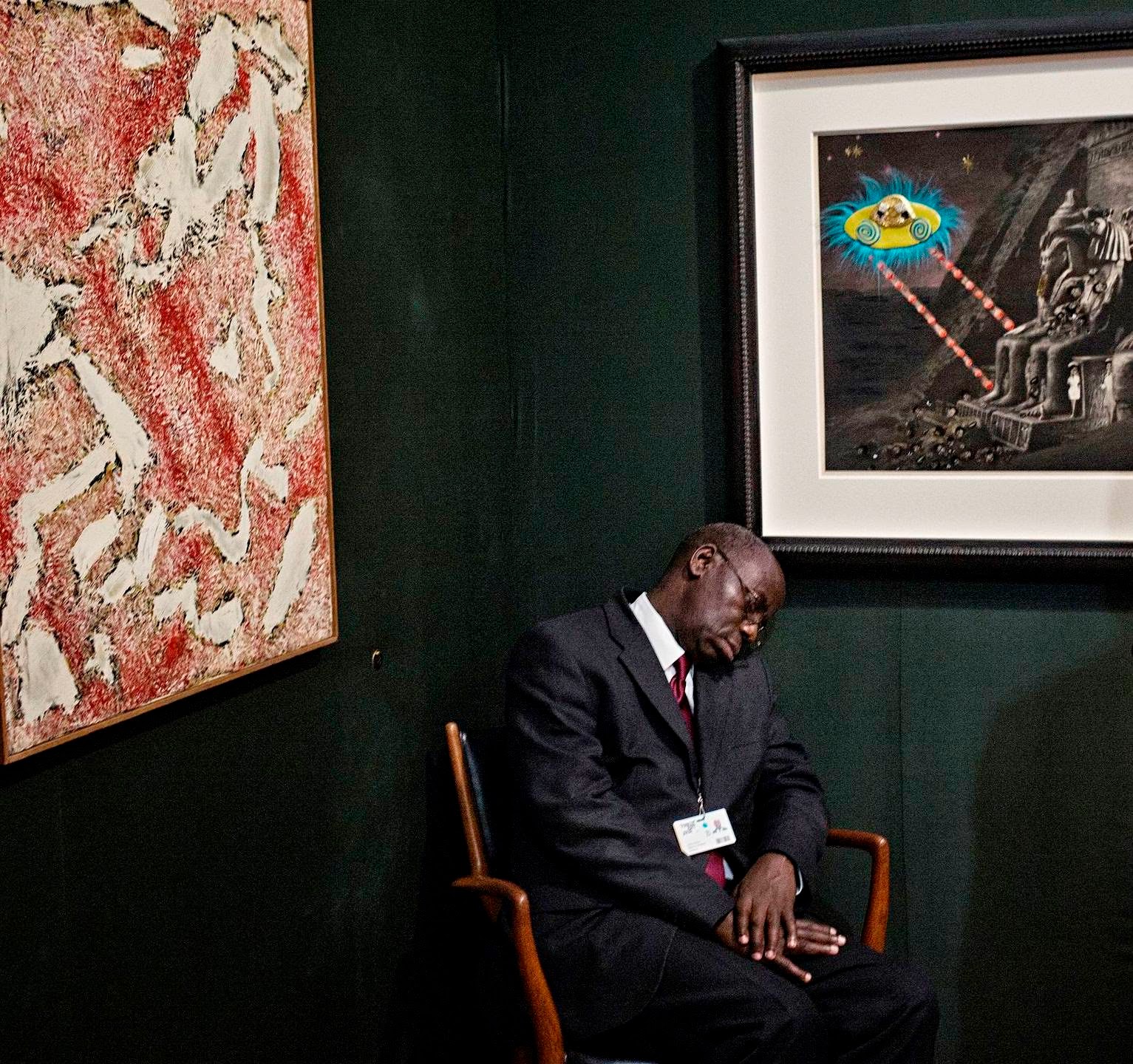 The stand-out booth was curated by Mark Wallinger from the artists of his new gallery, Hauser & Wirth, a two part stand recreating Freud’s study through 75 works with backgrounds of red (rational / conscious) or green (intuitive / unfixed thinking). The stand’s architecture formed one of Wallinger’s characteristic ‘I’ forms across both camps. The green section included Swiss maverick Christoph Büchel’s particularly useless ‘Sleeping Guard’, seen here in front of work by Chiyu Uemae and Ellen Gallagher. Here was a man  who could be sacked for appearing alert on the job. 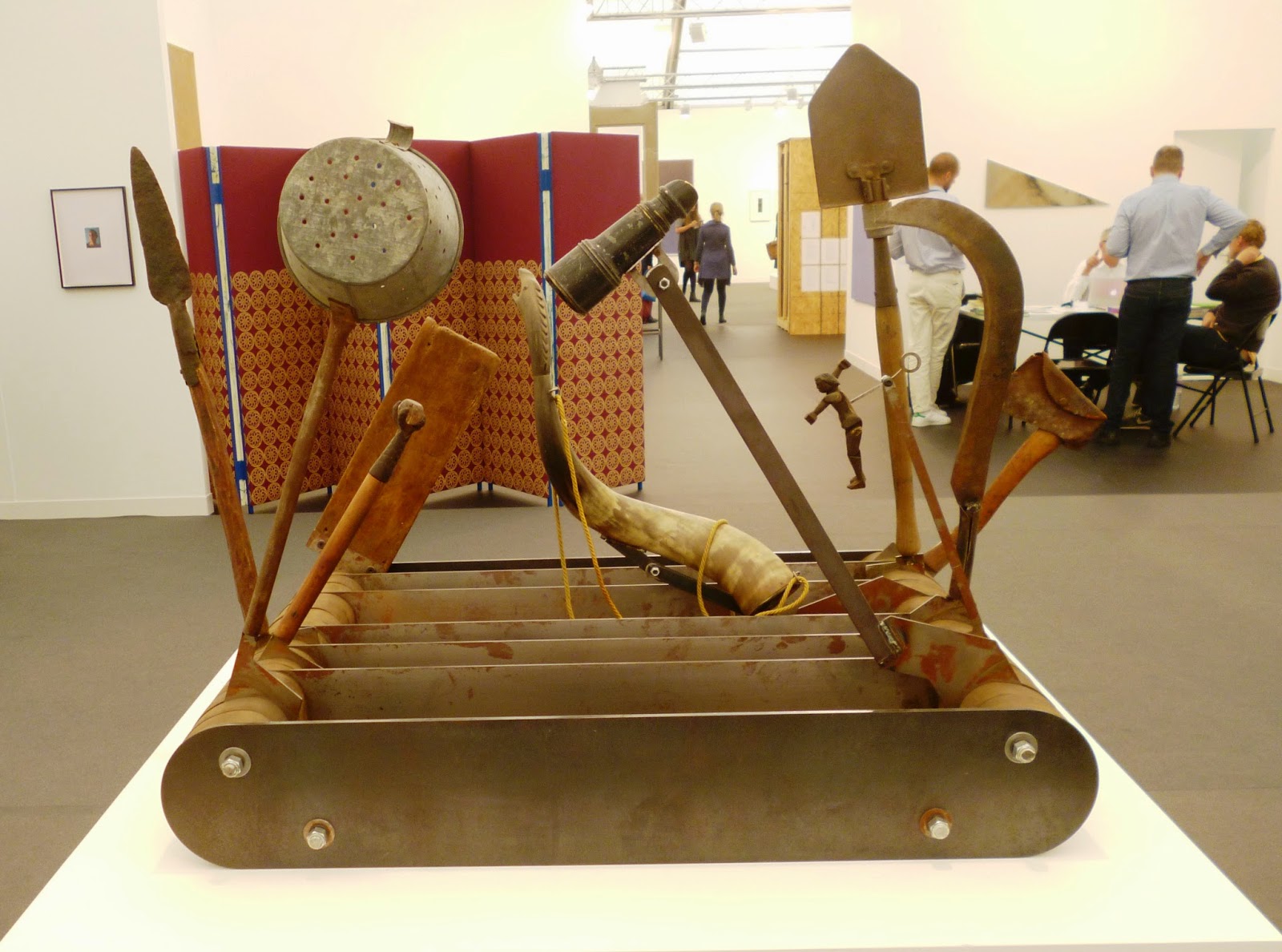 Pedro Reyes is best-known, perhaps, for melting down guns to make musical instruments in a critique of Mexican weapon culture.  He he scoured Mexican flea markets for sound-making items to mount on a custom-made base. His novel form of Swiss Army Knife lacks cutting capability and is anyway many times too big to be pocketed, but the elements can be moved around rather satisfyingly to find new sculptural arrangements.  That’s Mexico I guess: much bigger than the Switzerland, with plenty of interest and potential for change – but far from as efficiently set up. 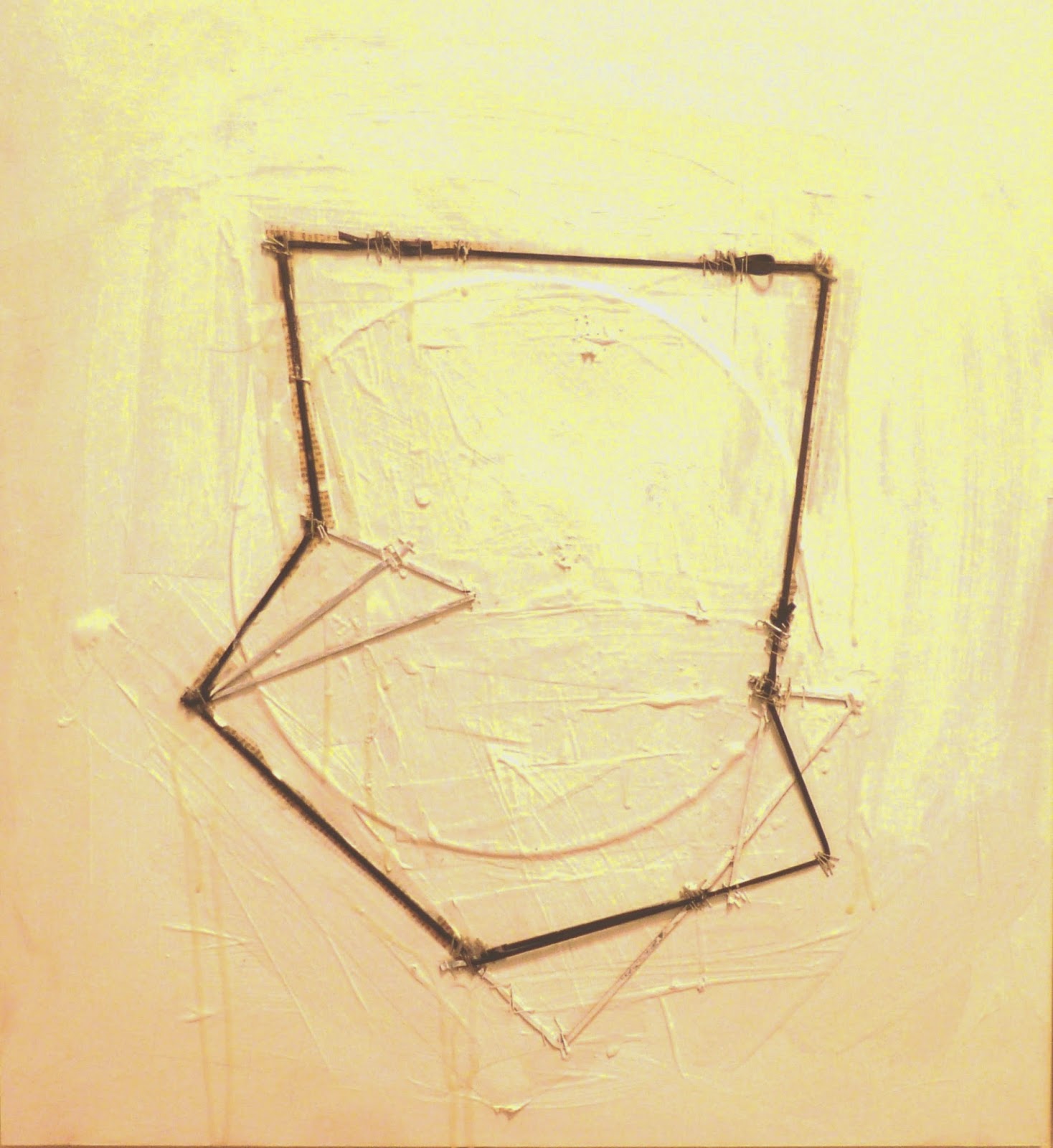 Prince is an artist of many streams, from jokes to nurses to photo-appropriation to car bonnets to  de Kooningesque nudes to various series of abstract paintings. In the group he calls ‘Band’, underlying information – here a text and a record – is rendered inaccessible by white paint, on top of which angular abstract shapes are made by stapling the rather impermanent medium of rubber bands to the canvas. ‘Normality as a special effect might be another form of hysteria’, said Prince by way of several explanations when he first showed in this mode in 2011. ‘These paintings are like an unrecognized dinosaur… a beautifully feathered tyrant’.  I trust that clarifies the intent. 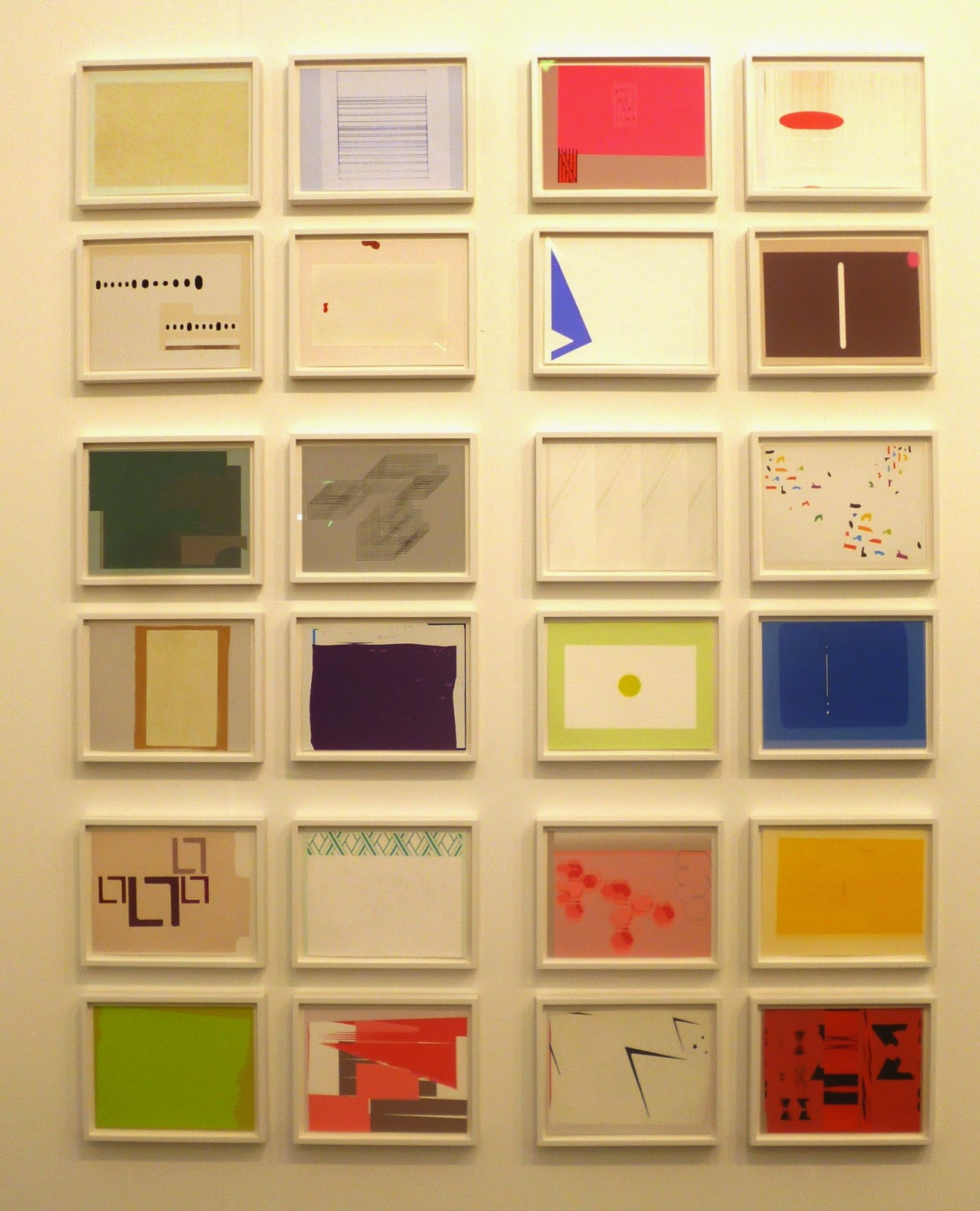 Lebanese media artist Walid Raad merges contrasting languages in these 27 prints, for which he fed the computer the many business cards he has been given over the years. They are said to mimic the formal approaches of the cool proto-Minimalist abstract 1940’s paintings of the Palestinian Suha Traboulsi (born 1923). Presumably Waad has invented her as a paradigm case of how any such woman’s art would have been overridden by corporate male cultures. 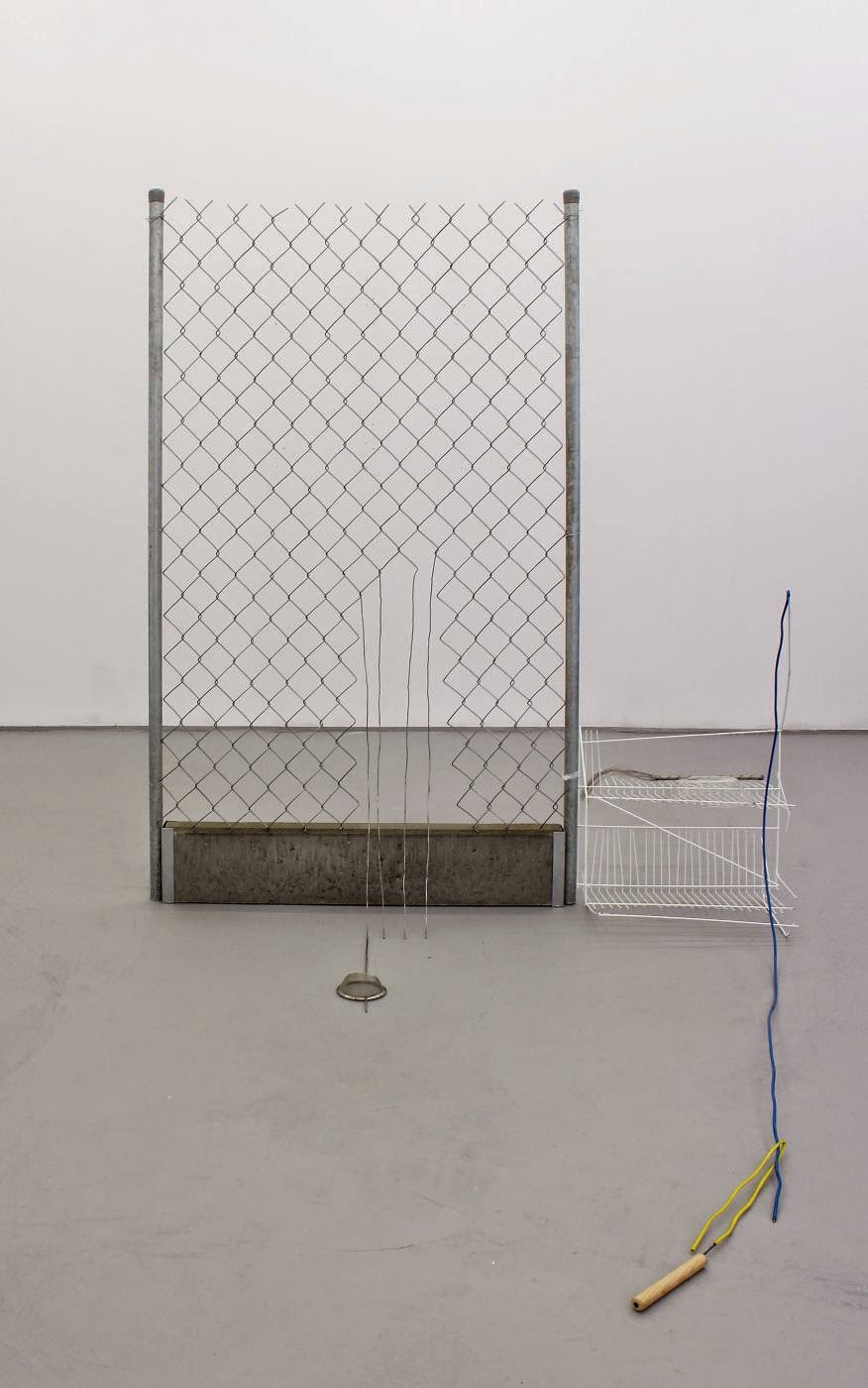 Gizela Mickiewicz: Rolling Back Ahead, 2013, at Galeria Stereo (Warsaw)

You might think of the Pole as making things less useful, though her practice is more about separating objects out from our normal view of them, so that they acquire individuality on their terms: she says she’s interested in ‘the ontolgical status of objects’. Here she reverses the production process by unpicking things towards the point before they become what they are. How far back is that point? 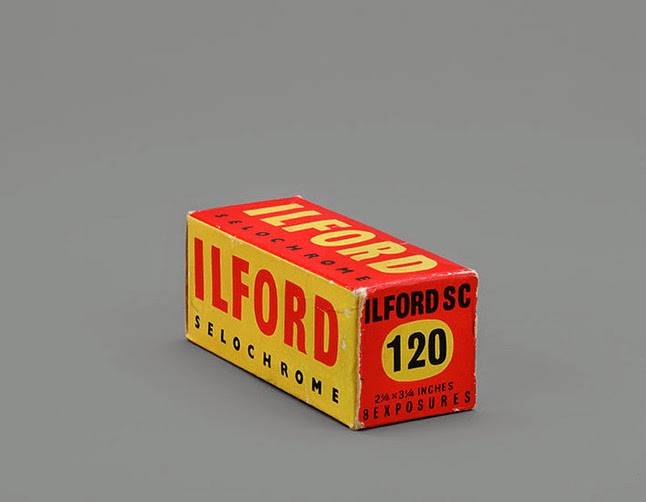 This, on the other hand, is a case of arrested development.  Experimental filmmaker Morgan Fisher has bought undeveloped rolls from all the major 1950’s film manufacturers, and resisted temptation by photographing them rather than attempting to access their contents. He was born in 1942, so they stand in for the possibility of revisiting his own years of development as well as constituting a tribute to the days when photography provided a direct physical link to the past. 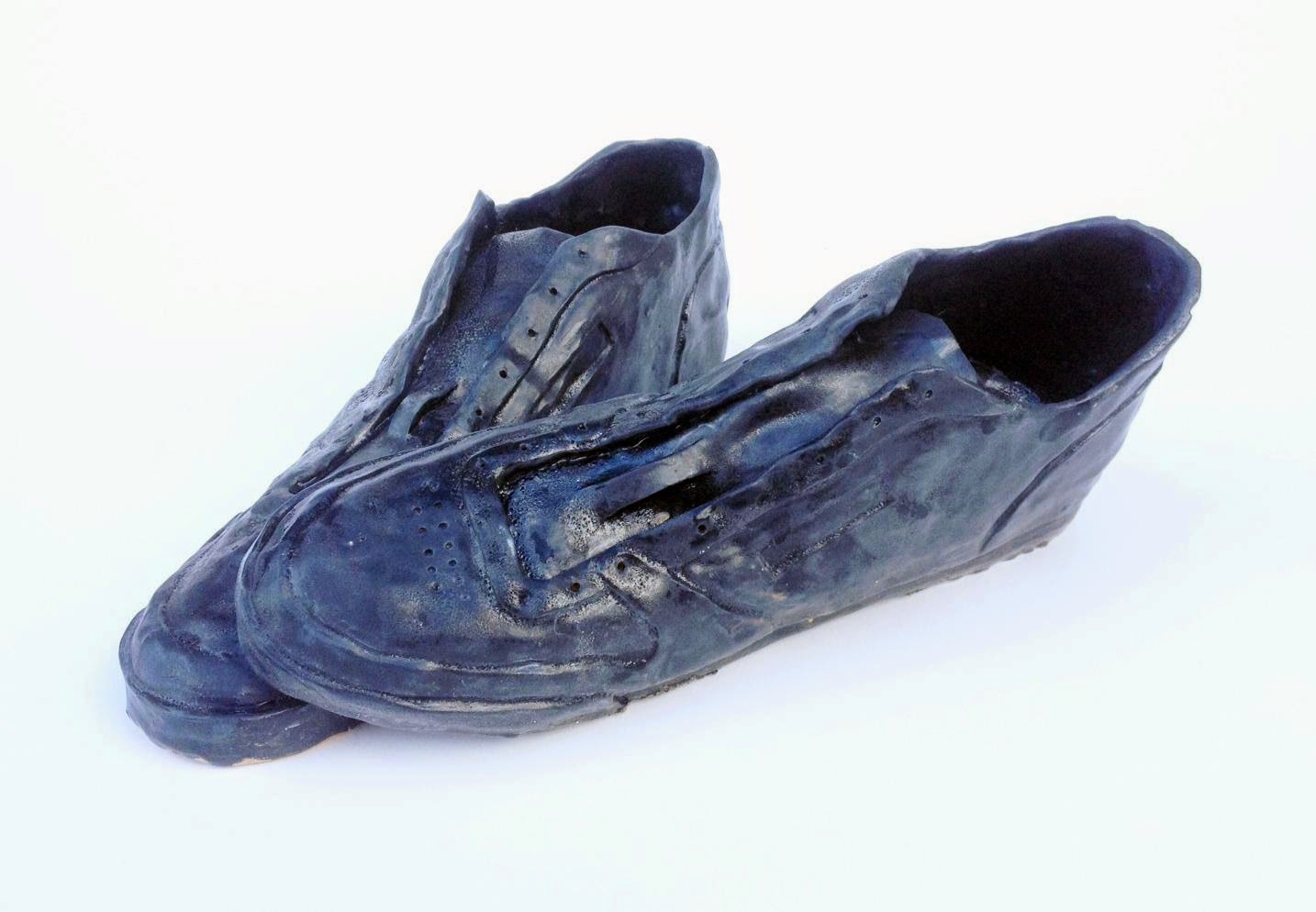 
Chester man Jesse Wine likes it if ‘artists understand how to apply a method and purposefully do it wrong; they are in control of knowing they are doing it wrong, but not in control of the outcome’. Accordingly, he pushes clay forms towards mis-shapen breaking points. Ceramic trainers may be wrong for the feet, but they do share a containing functionality with vases. Indeed, given what his vases are like, these shoes might be a better place in which to put flowers. Also available for a girlfriend. 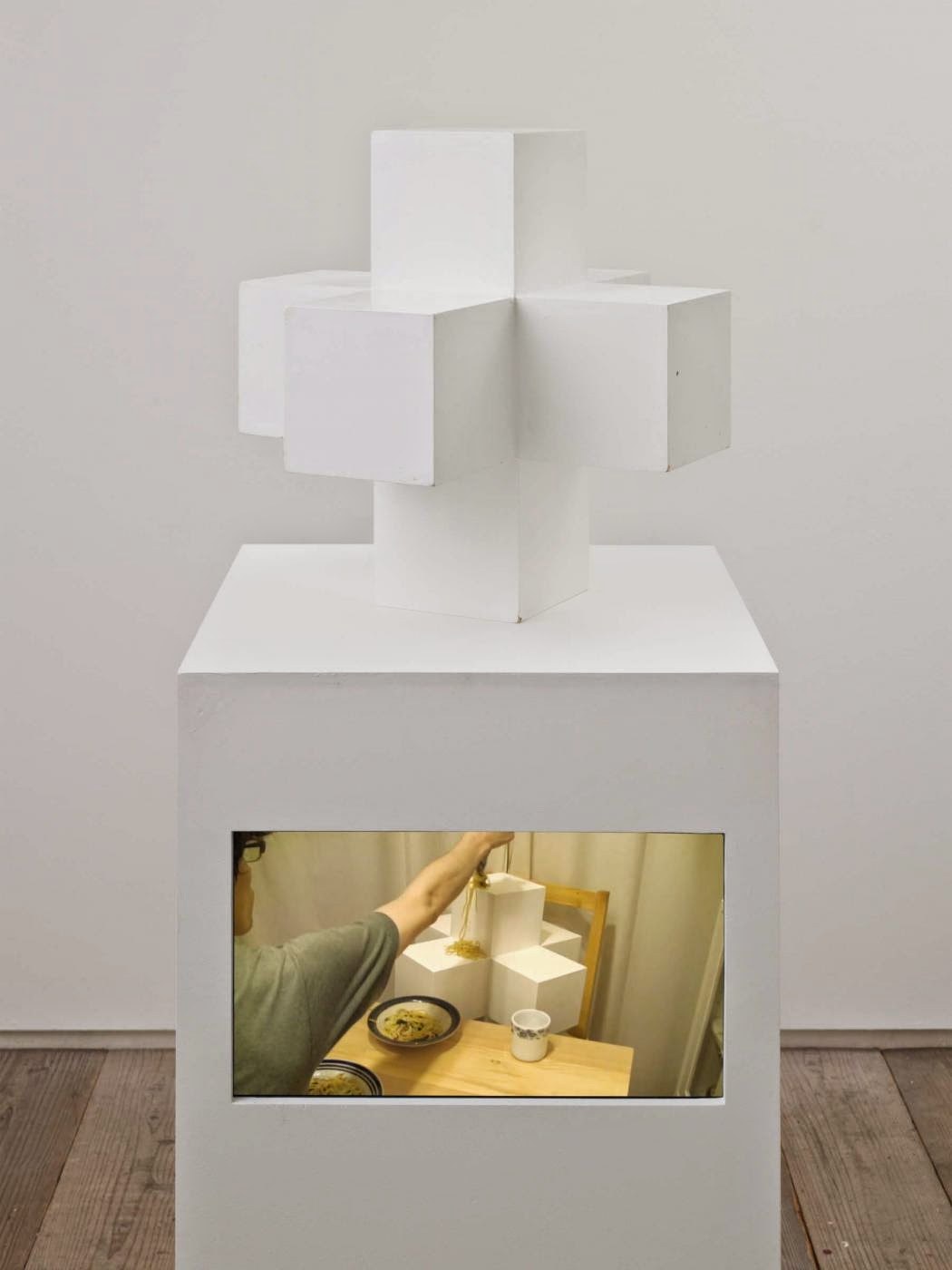 It’s difficult to generate uselessness in quite the same way in film, but Fluxus-influenced Japanese artist Taro Izumi pursues a related path in a set of videos for each of which he produced a cumbersome white ‘anti-social’  abstract sculpture (seen on top of the monitors), and asked participants to integrate  them into their everyday lives. We see various shapes being washed, fed and put to bed…  So just what is the connection between art and reality?