The New York iteration of London’s seminal Frieze art fair event, held on the idyllic landscape of Randalls Island was plagued with grey skies this year, in more ways than just the weather. Frieze’s 5th  season in New York, was lacking  in spark.  Very little was new. Very little challenged the status quo or inspired further thought. While I was largely disappointed, I did see a few works worth mentioning and sharing. 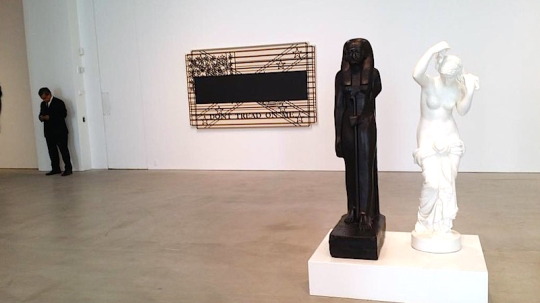 As I entered the majestic Frieze tent, the first thing I saw were two large sculptural pieces by Fred Wilson, flanking the entry to the Pace gallery booth. (Photo above) The pair of sculptures are the same two iconic images that have appeared in the Metropolitan Museum. In the Metropolitan museum’s setting , these appropriations of ancient art challenge the veracity of what viewers think they are seeing, because the reproductions are realistic enough to appear authentic ancient art  yet  they are from a contemporary artist. One  sculpture is of a life size black Egyptian goddess.  The adjacent sculpture is of a white, half clad drapped European goddess. Black -white, east -west – culture’s cradle. Seeing them at the start of the fair,  I jotted in my notes, ‘perfect metaphor’. Across from the Pace booth was the booth of PPOW gallery. PPOW was showing paintings by the deceased and much-missed 80’s artist David Wojnarowicz (Image Above) . Wojnarowicz ‘s colorful politically charged canvases juxtaposed to Wilson’s nod at ancient civilization gave me a jolt.  Artistically, we catapulted centuries. Clearly the ancient aspirations of balanced harmony next to the screaming colors of an aids activist from the 80’s got me pumped and primed to explore the fair and learn more about the artistic concerns of today. I was rewarded instantly right around the corner by CANADA gallery’s au currant collection of hip happening artists curated by the hip happening artist Katherine Burnhardt. I guess one could say, culturally, we have moved from the classical ‘idealized human’ form, to the 80’s art of ‘political commentary ’ towards today’s obsession with ‘things’.  CANADA’S  booth had an abundance of art all celebrating ‘objects’ . Bernhardt herself is known for making paintings about today’s common denominators: pizzas, computers coffee and so forth.  She thusly curated a lively booth crammed with art about ‘things’ we use and love. There were Sadie Laska’s true to size painterly cut outs of jeans and leather jacket. I particularly liked the embroidered upon plastic shopping bags by Josh Blackwell- which actually can double as puppets!  (Image Above) So far so good. 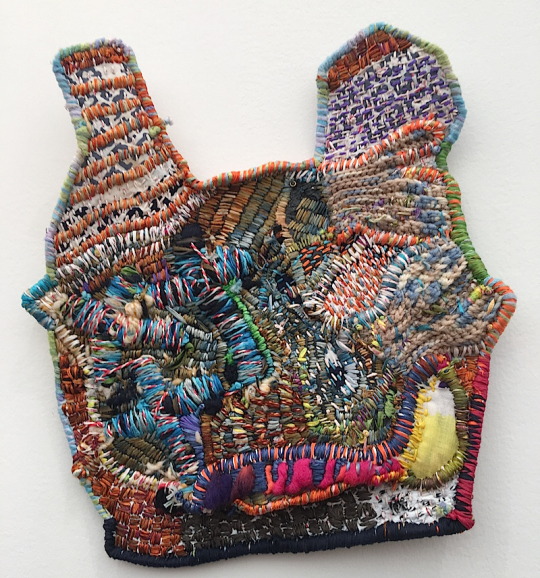 From there, I stopped at Salon 94’s stunning display of paintings by Ibrahim El-Salahi. They hung a long large painting of languid dreamy intertwining brown skin women. I learned the painting was painted in prison. Apparently, El-Salahi was imprisoned in Sudan for 6 months because of his cousins anti government activities. There were also very recent and beautiful pieces of his on display. While the 85 year old artist has enjoyed exhibitions in London, he has not as of yet had representation in New York!  The gallerist described him as a major bridge between African arts and Europe.  Along the outside of the booth was a cascade of curvy, drawn and painted upon, vases by Betty Woodman. Always a pleasure to see her work, individually, and in this case well composed collectively. Along the same lines as art I found fetching and lovely to look at i share: an Ellen Birkenblitt painting , beside a watermelon vase by Shio Kusaka at Anton Kern gallery. I also stopped and admired the paintings by Patricia Trieb at Kate Macgary’s booth which I found both engaging and beautiful. The WOW factor, for sure , went to Gavin Brown’s wall of  ‘Puppets  from Pruppa’.  The Belgian artistic duo that made these dirty little guys are: Jos De Gruyter and Harald Thys. This was the artist’s first foray into presenting sculpture. They are known previously for making video/ installation art.  These mini sculptures were displayed, (but not sold), as one piece along a giant wall. The 50 or more wooly, Jute, straw, iron threaded natty and disheveled, highly engaging little personalities were hard to place or pigeonhole. They appeared ageless and indistinct, and yet they were highly unique. At first glance they were like scary little voodoo dolls. My mind, all at once, whirled with questions: Were they migrants? Were they ancient Vikings? Are they Homeless people with alert inquisitive faces? Are they alter egos for well healed art collectors?  I asked someone at the booth about the possible reference or inference by the artists but was told “ I don’t know that they are meant to be specific. “ Immediately, I mentally logged them as today’s update to Fred Wilson’s appropriation of Classical sculptures of divine human form. I loved these little  puppet people as a most curious group and found that I stayed a long while in the booth to take them in one at a time. Each one was a gem, priced FYI at $5,500. I will end with the booth from the Berlin gallery Societe. They had a huge wrap around corner stall of refrigerators housing the new hip meal replacement drink called Soylent.  I lit up when I saw this because I was hungry and in need of nourishment. I was also excited because I had read about Soylent and was never able to try it because it is reproduced in limited quantity and hard to obtain. Only some privy, early on insiders were able to score cases of the touted beverage. I was told at the booth that this is why the artist, Sean Raspet, a flavor artist, chose this product to make his statement on the commercialization of the art market. Gotcha! I eagerly twisted off the top of the Soylent bottle and am sorry to report the taste is extremely bland. It tasted vaguely like something chalky from my childhood. Maybe it would be improved with a shot of Kahlua.For sure it needs something with a kick.  After two sips I had to throw it out.