Just in time for Easter, the sensational/YBA artist Gavin Turk has unveiled an ambitious new project in collaboration with Photo London, Somerset House, and Ben Brown Fine Arts, featuring his giant bronze egg sculpture, ‘Oeuvre’, to be unveiled on the River Terrace at Somerset House on 14th April.

The bronze egg is intended as a starting point, and inspiration for photographers around the world to collaborate with Gavin on an ambitious public installation for Photo London, titled ‘Gavin Turk – Portrait of an Egg’. The intention is to create a vibrant and entirely democratic public participation artwork; entry is free and open to photographers of any age, professional or amateur; all that is required to take part is a digital photographic device with which to record their own Portrait of an Egg. 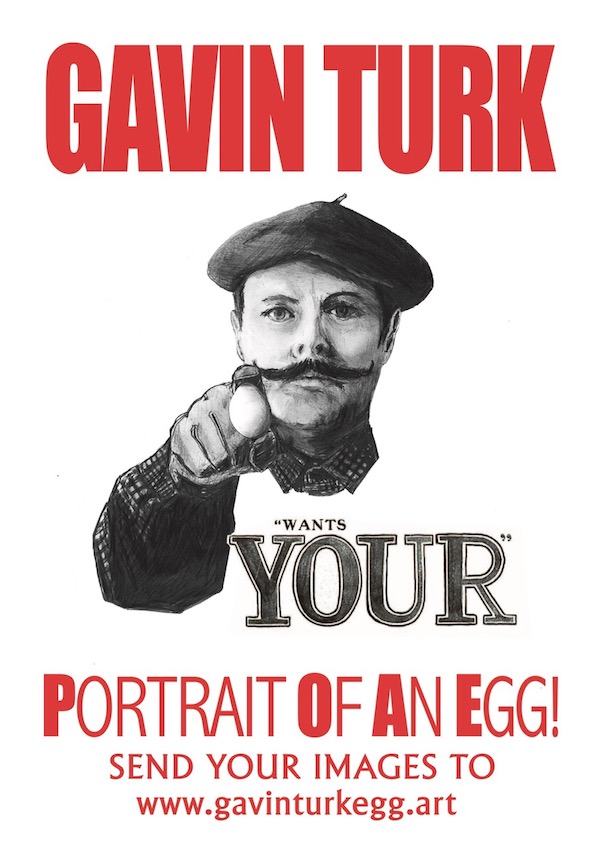 Submissions to Gavin Turk – Portrait of an Egg can be made from 14th March via the project website: www.gavinturkegg.art All egg portraits received will be gathered to create the final collaborative work of art – a moving montage, with soundscape – to be installed at Somerset House during Photo London from 16th – 19th May. The aim is to create the world’s most significant public ‘egg collaboration’.

Portrait of an Egg follows with spooky synchronicity on the Instagram phenomenon known as @world_record_egg. A stock image of a simple Hens eggs become the most liked image ever posted on Instagram this January. This was obviously nothing to do with originality but more about creating a meme that spread through the collective human media imagination. Portrait of an Egg aims to tap into that collective imagination, and Gavin hopes to create a vast cornucopia of digital images within this installation, all celebrating a simple object which has long stood as an icon for creativity.

Following in the footsteps of Dali, Magritte, Manzoni, Broothaers and Brancusi, eggs recur again and again in Gavin’s work as sculptural metaphors, of signature or logo. A symbol of life, of creation, of originality, fragility and mortality, eggs appear as surreal faces, as giant duck eggs, as broken shells depicting his signature and in liquid form as mayonnaise and egg tempera paint, while his “hare” eggs create mythical new hybrids. Transforming eggs from the sacred to the profane, the pure to the parasitical, a symbol of creation to something created; Gavin journeys from eggs to egg-cup shaped fonts as he explores the delicate relationship between life and art. Gavin asks a seemingly simple question, ‘How do you portray an Egg?

‘Looking at art by photographing it has now become a dominant way of behaving. Art is being constantly exposed to the glare of the internet and social media; everyone has a camera and a new way of seeing. I want to take this moment a step further and invite the world’s photographers to take part in a mass creative act.’ – Gavin Turk

Whilst the installation, Portrait of an Egg, is free from selection, there will also be a ‘Hall of Fame’ section chosen by our guest curators, Martin Parr, Matthew Collings, Francesca Gavin and @World_record_egg (the Instagram world record account holders) Works will be viewable online before and during the exhibition, as well as displayed within Somerset House for Photo London.

Gavin Turk b.1967 lives and works in London. He has pioneered many forms of contemporary British sculpture, including the waxwork, the recycled art-historical icon and the use of rubbish in art. Turk’s installations and sculptures deal with issues of authorship, authenticity and identity. Concerned with the ‘myth’ of the artist and the ‘authorship’ of a work, Turk’s engagement with this modernist, avant-garde debate stretches back to the ready-mades of Marcel Duchamp.

In 1991, the Royal College of Art refused Turk a degree on the basis that his final show, ‘Cave’, consisted of a whitewashed studio space containing only a blue heritage plaque commemorating his presence ‘Gavin Turk worked here 1989-91′. Instantly gaining notoriety through this installation, Turk’s work has since been collected and exhibited by many major museums and galleries throughout the world.

SUBMISSION GUIDELINES FOR PORTRAIT OF AN EGG: The photograph(s) submitted is your own, and you are the owner of the photograph; You grant permission, in the form of a non-exclusive license, to the artist Gavin Turk to use your photograph as part of the Gavin Turk – Portrait of an Egg; You understand that your photograph will be incorporated into an exhibition and displayed on social media and websites and may be used in printed media; If selected your photo may be incorporated into an exhibition curated by Gavin Turk & Special guest curators for the Photo London 2019, Somerset House, London Exhibition 16th – 19th May 2019; We promise to credit you as the creator of the photograph in the resulting exhibition and any use of the photograph online; Artists images, will be taken down by the artists request to do so email info@gavinturkegg.art – with screenshot/low-res of the image and the artwork details.