The German Historical Museum in Berlin has acquired a significant painting by George Grosz executed at the time he was living in exile in New York. ‘Cain or Hitler in Hell’ is a portrait of the Fascist leader in an apocalyptic landscape reminiscent of the Chapman Brothers. The German leader is depicted as Cain, the son of Adam and Eve credited as the first murderer, according to Fledbiblical text.

Grosz was hated by Hitler and was one of the first artists to be labelled degenerate by the Third Reich. He left Germany shortly before Hitler seized power. Labelled “Cultural Bolshevist Number One” by the Nazis, the artist became an American citizen in 1938 after he was stripped of his citizenship. Cain or Hitler in Hell has remained in his family’s ownership since Grosz painted it, the museum says. It will now be displayed in the museum’s permanent exhibition. The painting was acquired with funding from the States’ Cultural Foundation and the German government, according to a statement from the German Historical Museum. 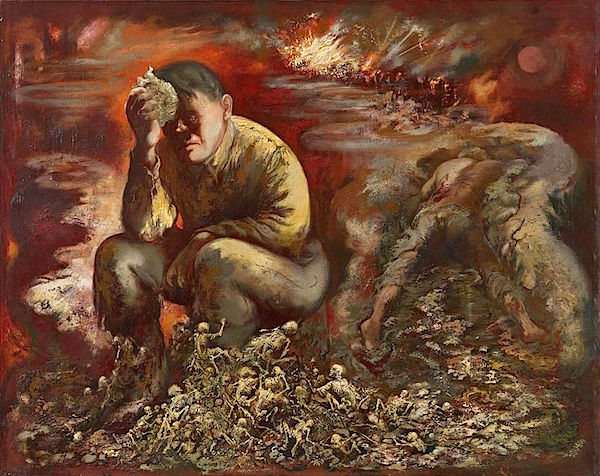 The German Historical Museum is Germany’s national history museum. Located in Berlin’s historic centre, it sees itself as a place for lively communication and discussion of history.

In addition to the acquisitions of the MfDG, the militaria holdings of the former Royal Prussian armoury also belonged to this collection. Complemented by the numerous new acquisitions since 1987, the collection of the German Historical Museum today comprises around 900,000 objects. A large part of the collection is made available online by the German Historical Museum of Research and the interested public in its database.

The permanent exhibition in the Zeughaus “German History from the Middle Ages to the Fall of the Wall” with more than 7,000 objects gives a unique overview of German history in an international context. The museum’s temporary exhibitions can be seen in the Pei Building. They are devoted to formative historical events, epochs and social developments.

Guided tours and history workshops in the exhibitions convey a broad spectrum of further information appropriate to the target group. Specialists as well as those interested in history can also attend events such as lectures, panel discussions or conferences.

The Zeughauskino, with its collection of historic film material, shows thematically and monographically oriented film series from the entire spectrum of German and international film history. These include programs that are linked to the topics of the respective temporary exhibitions. It is also the venue for numerous festivals and film days.

The German Historical Museum also includes a public reference library with an extensive department for manuscripts as well as old and valuable prints, as well as the image archive with around 500,000 copies of German and European history, notable bequests from photographers and agencies, and the documentation of the collections.

The Living Museum Online (LeMO) , a cooperation with the House of History of the Federal Republic of Germany in Bonn and the Federal Archives, is a living museum. It offers scientifically sound information and an extensive collection of text and image sources on European history from 1815 to the present.