Yesterday the art world not only lost one of its finest and most loved abstract painters, but I lost a great friend. There will be plenty of well-deserved plaudits and obituaries for Gillian Ayres, who died yesterday at the age of 88, after a bout of illness. But I want to add something more personal.

I first met her in 1984 when, as a young arts journalist, I was sent to interview her in her Three Bears cottage in a remote glade of a Cornish valley. It was a long way to go, and I was invited to stay. Warm and chaotic, the place was full of animals, cigarette smoke and, I believe, followed the Quentin Crisp approach to housekeeping, which was that after four years the dust never got any worse. I found it amazing that Gillian was able to produce such an array of stunning, jewel-like canvases from her small studio. We hit it off right away. Feisty, opinionated, fiercely intelligent and well read, we discussed everything from art, to Shakespeare and religion, which she hated. And she cooked delicious meals.

Independent and feisty Gillian was, actually, very shy and hated to talk in any public capacity about her work – SH

Born in 1930, she grew up in Barnes, then still semi-rural with its wooded common and market gardens where, many years later I, myself, was to live. It was a comfortable middle-class existence. She attended St. Paul’s Girls school where her best friend was the future politician Shirley Williams. She once sent me a photograph of them sitting on a haystack. With her long golden locks, she was a stunning teenage. But it was on a day in 1943, she told me, as she was going up to the school art room, that she discovered some illustrated monographs on van Gogh, Gauguin and Monet. Already well versed in poetry and music, she had excelled at drawing and painting since she’d been a small child, but this was the moment she knew she wanted to be an artist. 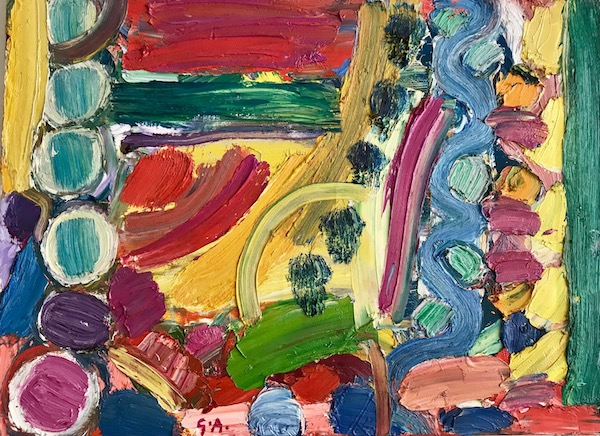 At St. Paul’s a social conscience was encouraged. Many of her teachers had been suffragettes. Just before D-Day, when she was 14, the brother of a friend who’d been serving in the army arrived ‘out of the desert’ and took them both for a treat to a Knightsbridge hotel. Previously Head Boy at Winchester, he was, as Gillian put it with characteristic understatement, ‘bumped off’. She remembered then, in the midst of war, thinking that art was all that we human beings leave behind.

Fiercely independent she determined, in 1946, to leave school early and go to art school, despite her head mistress’s portentous warning to her mother about the sort of men her daughter would meet there. Too young at 16 for the Slade, she gained a place at Camberwell—though her kindly parents would have preferred her to marry a respectable doctor. Having no grant and, though she received 30 shillings a week from her family, her need of money to fund her voracious smoking habit led her to model (nude) for the Camera Club. She never told her parents. She was, she said, pretty bloody-minded when young.

It was at Camberwell that she rejected what she referred to as the prevailing Euston Road ‘measuring thing’ and found her tutor, William Coldstream, dictatorial— ‘it was dot and dash and measure.’ So she began to attend Victor Pasmore’s Saturday morning classes where he talked of ‘feelings’ and embraced abstraction. In 1950, two months before her finals she walked out of Camberwell— ‘What should one have taken it for and for whom?’—and caught a train to Penzance where she spent the summer working as a chambermaid. Back in London she turned down an allowance from her father and an offer to go to Paris and did a series of uninspiring jobs. An opportunity to work at the AIA gallery gave her the chance to meet some of the most original artists of her day. It was there that she began to find her own creative vision.

It’s hard, now, in these artistically eclectic times, when anything goes, to understand just how hostile then the general public was to abstract art and how dominated art schools were by an academic approach. As Herbert Read said of abstraction, it was ‘met with almost universal resistance in England’. But the 1956 Tate exhibition Modern Art of Abstract Expressionism was a creative watershed. Gillian revelled in the freedom and energy of the Pollocks, the de Koonings and Klines and determined that from then on, she’d leave the traces of her painterly actions on the canvas and allow the paint to speak for itself. After this, she began to paint on the floor. It was at her last show at Alan Cristea, which even in her 80s, was a triumph of originality and invention, that she said to me: ‘I love obscurity in modern art. I don’t want a story. There are no rules about anything. I just go on doing what I do. I want to do nothing else.’ 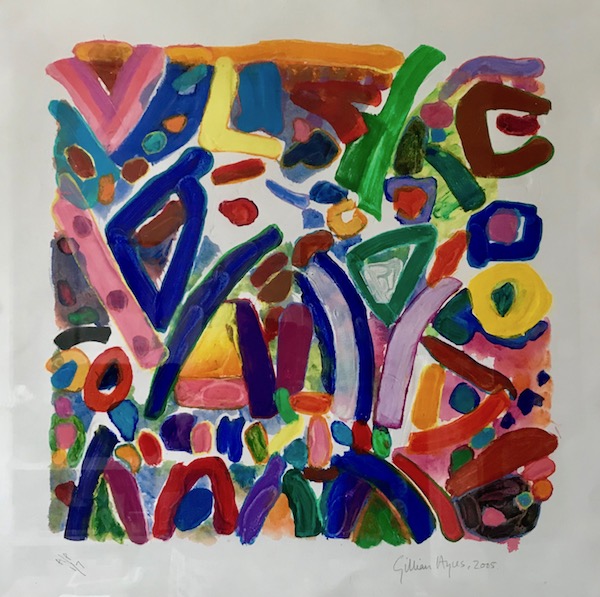 I have so many Gillian stories. There’s the time I was staying at Tall Trees, and one of her dear (and I have to say very smelly dogs) died in the night from kidney failure. In the morning I came downstairs to find it lying stiff on its back in the wheelbarrow covered by the beautiful Persian rug it had peed on during the night before – and a very distraught Gillian. I remember, too, the wonderful week I spent at the British School of Rome as her guest and companion, much of it also in the company of her son Sam Mundy. We looked at art, we ate wonderful meals, saw friends in a remote farmhouse in the hills. She was always enormously generous, and I left Rome carrying a painting fresh from the studio which, in those days before security checks, I carried onto the plane still wet. When I got it home, I realised I’d pressed my thumb into a layer of thick turquoise paint. I rang Gillian appalled. Oh, don’t worry, she said, in that unpretentious way of hers, just squash it over. I did, and in so doing, went down to the next layer of pink paint. Of course, these many years later it has dried. My thumbprint now a part of its history. Then there was the time when my own mother died, and I received, through the post, two beautiful artist prints rolled up in a tube. I was overwhelmed. When I phoned to thank her, we joked that she could now be my surrogate mother.

Gillian worked enormously hard. She more or less supported her two sons when they were growing up through teaching at St. Martins, where she was appointed Head of Painting in 1978, the first woman in this country to hold such a post, and teaching at Winchester. Always one to live by her own rules, with no regular income, she ended up living in a rambling 18th rectory in Wales in a complicated ménage a trois with her husband Henry Mundy and lover, the Welsh painter, Gareth Williams.

In 2004 she rang me to say that there’d been a fire at the Momart warehouse and that much of her middle period work, along with that by painters such as Patrick Heron and Barry Flanigan, had gone up in flames. Not only was this a huge financial loss but it left a big hole in the narrative of her life’s work. But with characteristic fortitude Gillian made very little of it. She was never one for self-pity.

Independent and feisty she was, actually, very shy and hated to talk in any public capacity about her work. Yet her life-affirming paintings, with their references to Shakespeare, music and Egyptian art, continued to push against their own limits to speak, not only of a passion for paint, but of the light, lyricism and sensuality of the natural world. ‘The act of painting,’ she once said to me with total conviction, ‘is an act of belief.’

Through my friendship with her, I had a vision of a fast disappearing bohemian world. One where one did what one did because of passion and love and not career choices, where what other people thought just didn’t matter. Gillian Ayres changed the face of British painting, and I shall miss her greatly. It was a privilege to know her.