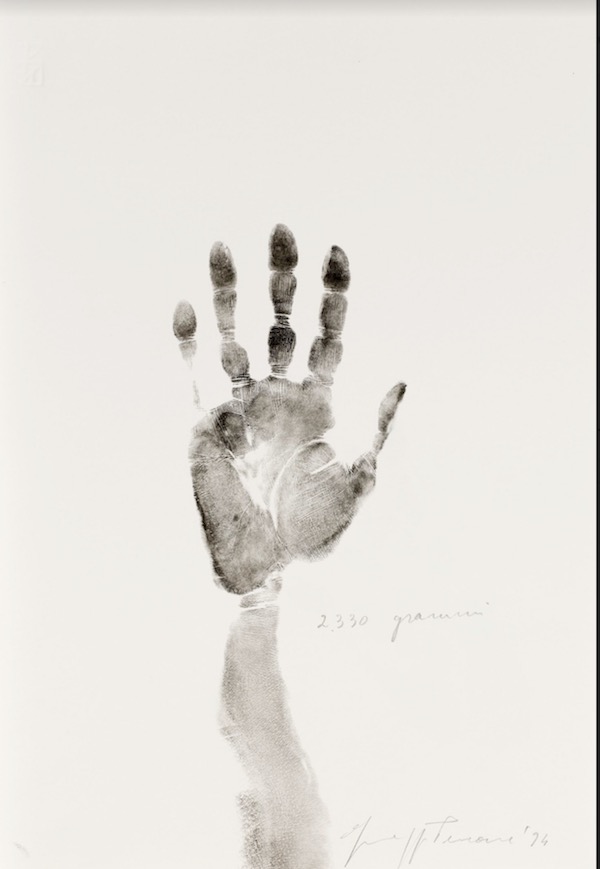 Giuseppe Penone (born in 1947) has made two generous gifts of 350 drawings to the Centre Pompidou and a similar number works on paper to the Philadelphia Museum of Art.

To me, drawing has a double fascination; the constantly renewed surprise afforded by its materiality – GP

To me, drawing has a double fascination; the constantly renewed surprise afforded by its materiality and the unique possibility to visualize a gesture. It is the same fascination that materials and working techniques grant me when making my sculptures. It is through written or drawn marks that I have developed my work. It is an exercise that I began in the 1960s and still continues.

This incredible donation, of over 660 works in total, bears testimony to the artist’s strong attachment to the two institutions. In the 1970s, Penone witnessed the birth of the Centre Pompidou, marking the beginning of a long-lasting relationship. In 2004, the Centre Pompidou dedicated a retrospective exhibition to the artist. Today, the Musée national d’art moderne boasts almost 30 of his works in its collection and two rooms are now devoted to him in its permanent exhibition. Similarly, the artist has special ties with the Philadelphia Museum of Art, fascinated as he is by Marcel Duchamp’s last work, Etant donnés, among the exceptional set of works by Duchamp held there, and also with Rodin and Brancusi. This dual gift has been designed by Penone in such a way that the sets of works given to Paris and Philadelphia will enter into a natural dialogue with each other.

The donation by Giuseppe Penone of some 350 drawings from a period of fifty years (from 1967 to 2019) constitutes a major contribution to enriching the Cabinet d’art graphique at the Centre Pompidou. This is the largest donation to the Cabinet d’art graphique since the donation of Florence and Daniel Guerlain in 2012, which already included 9 drawings by the Italian artist. Penone is one of the major figures in the Italian and European art of the past fifty years and French institutions have always been quick to recognize the importance and singularity of his artistic work. Associated with Arte Povera, he has developed an extremely personal approach fed by philosophical and poetic reflection on the relationship between human and nature. His experience of drawing should be understood as going hand-in-hand with his written texts (his philosophy of art, studio notes and poetic texts) which the Paris School of Fine Arts compiled in 2000 in one volume, which has been re-edited and added to regularly since then, under the title Respirer l’ombre, the same title as the masterful installation offered by the artist to the MNAM the following year. Respirare l’ombra was quick to become a key feature for visitors to the museum. In 2017, three large sculptures by Penone were added to the Centre Pompidou collection, thanks to a priceless anonymous gift. The ties between Penone and the Centre Pompidou have become very close over the years, and even historic with this new gift.

In a world currently in upheaval, his work appears as something of a patient meditation, both subtle and obstinate, on time and its place in the space of the work. The works of this exceptional donation will be exhibited in 2022.

The 350 or so drawings donated to the Centre Pompidou and the 309 works on paper and artist books gifted to the Philadelphia Museum of Art represent an important part of the artist’s corpus of works on paper. Many of the works among them have never been exhibited before. This donation reflects the serial aspect of Penone’s graphic work, and the incredible range of techniques and materials mastered by Penone in his drawings (pencil, ballpoint pen, watercolour, coffee, India ink, frottage, graphite, rice paper, cardboard, Japanese paper, glossy paper treated with turpentine, charcoal, adhesive tape and leaves) and traces his explorations of skin as the organic threshold between the self and the natural world. 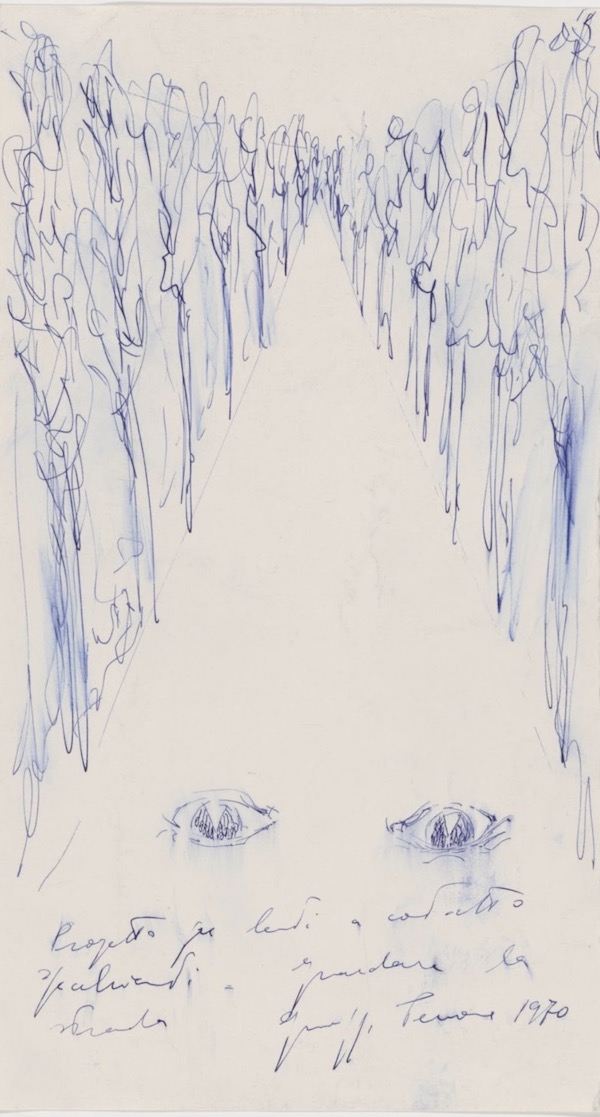 Some works, from the late 1960s to the early 1970s, are preparatory drawings for future installations or sculptures. Drawings such as Progetto per la mostra da G. Enzo Sperone (Project for the Exhibition at G. Enzo Sperone), 1969, appear as quick impressions on paper accompanied by written instructions. The works also include sculptures and interventions. For example, Progetto per lenti a contatto specchianti – Guardare la strada (Project for mirroring lens – to look at the street), 1970, could be viewed as a continuation of his iconic Rovesciare i propri occhi (To Unroll One’s Eyes), 1970, a collage of black and white photographs by Paolo Mussat Sartor, which consecrated the performance of the same name. Finally, some of the drawings given are autonomous works, such as the stunning Scultura (Sculpture), 1974, comprising ten sheets of cardboard carrying the imprint of the skin in graphite on adhesive tape that resemble thin branches or tangled spider webs, spreading over the paper support.

Currently based in Turin, Giuseppe Penone was born in the village of Garessio in the northern region of Piedmont. His rural upbringing greatly influenced his work as an artist. His ground-breaking performances and sculptures of the 1960s and 1970s were intended as interventions, placing his body in close contact with nature, particularly trees, stones and water. Penone’s entire oeuvre interrogates the connection between the human being and the natural world, approaching nature as an autonomous, animated organism that mimics the workings of the human body. While sharing with Arte Povera the common goals of bridging art and everyday life, Penone’s emphasis on the use of his body in his work and his interest in nature has also aligned him with other artistic movements, such as Process Art and Land Art. In addition to the Centre Pompidou and the Philadelphia Museum of Art, Penone’s work is contained in prominent international public collections such as the Museum of Modern Art (New York), Tate Modern, (London), the Nationalgalerie (Berlin) and MAXXI (Rome). The exhibition “Penone. L’espace de la main”, presented in 1991 at the Musée de la Ville de Strasbourg, is the first to showcase Penone’s graphic work. In 2013, he was the guest artist at the Château de Versailles, and became the year after the 26th winner of the Praemium Imperiale. In 2017, he produced a three-part installation commissioned by the Louvre Abu Dhabi.