The Glasgow Festival’s opening weekend (20-22 April) made for maximum stimulation: the 45 participating locations become an excuse to explore the city throughout which they are spread in such various locations as a railway waiting room to a university roof to Ruth Ewan’s history of Socialist Sunday Schools, perfectly placed at the Scotland Street School Museum. Then there were the talks, the performances, the openings, the alternative spaces, the parties… The balance between Scots and others was good, reflected in the artists I focus on below: six Celts, two Sassenachs, six from beyond these shores. There was a theme – ‘Real Time’ – but what couldn’t be made to relate to something so broad? Yet there did seem to be plenty of reference to or interaction with times past…

Karla Black at the Gallery of Modern Art

Recent Turner Prize shortlistee Karla Black uses uses fragile and potentially ephemeral materials. That made for an immediate source of productive contrast from giving her the run of GoMA’s imposing classically-columned main hall, historically the focus of Glasgow’s financial trading business. Cue the ravishing combination of ‘Empty Now’ – 17 tons of variously woods’ sawdusts, layered like the mother of all tiramsus – and ‘Will Attach’, 170 cellophane twists hung from the ceiling in a gradually descending formation so that they started well overhead but the viewer was in among them by the other end of the hall. Here bigger, pointing up the originality of Black’s sculptural forms, was definitely better.

Even before the waiting classes of children streamed onto it, this was obviously a public art coup, up there with Olafur Eliasson’s Sun and  Carsten Höller’s slides. Jeremy Deller, the art world’s arch-combiner of popular tastes with audience involvement, has made what must be the world’s biggest bouncy castle in the form of a full size inflatable version of Stonehenge. ‘No shoes, no sharp objects, no human sacrifice’ warned the notice alongside. It’s a homage, says Deller, ‘not only to Stonehenge itself but to the anarchic freak-out culture of Hawkwind, Bruce Lacey and Ken Russell’. It travels to London for the Olympics, and, of course, the kids loved it more than they would the fenced-off original… 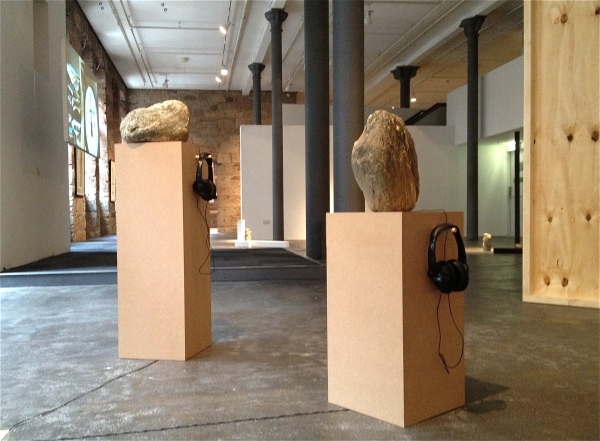 Ian Giles: ‘Listen Harder’ in ‘Arrives in Starting’ at The Lighthouse

Fiona Mackay and Rachel Adams showed well in the Duchy Gallery’s mixed selection of work by recent Glasgow graduates, but the attention grabber was London-based video and performance artist Ian Giles’ pair of sculptures posing the immediate question: what would you hear if you listen to a rock? Not some sort of musical pun, the headphones revealed, but the ancient sound of the naturally occurring phenomenon of Acoustic Emission, whereby external stimuli such as earthquakes generate sources of elastic waves inside rocks. The work contains 44,000 sound clips of Acoustic Emissions collected by the Rock and Ice Physics Laboratory at University College London, lowered to an audible frequency. Groovy…
﻿

Niall Macdonald in ‘Petrosphere’ at Skypark

The basement of a shinily-clad office block (in which o2 employs thousands) hosted the second half of a lively Greco-Caledonian exchange, the Scots in it having already shown in Athens. I was struck by how Niall Macdonald combined timeless natural forms from his Hebridian home with the more temporary contemporary in violently contrasting scales: a neon ring plus whale vertebrae either side of a column the size of a small cetacean; and a delicate combination of camera and snails, for which he had found an unusually smooth means of casting items in pure white plaster.

In 2009 Glasgow-based Richard Wright won the Turner Prize – as Scots often do – for his site-specific and necessarily temporary practise of drawing on gallery walls. This first ever show dedicated to his work on paper covered a dozen years through 30 varied drawings: realistic depictions of castle architecture; a giant silver hand; geometric abstraction; pulsing cloud-like patterns applied with gold leaf; and complex symmetrical eastern-flavoured drawings of great delicacy. Most of these related directly to site-specific projects, making them, perhaps, an exploration of the opposite effect of decontextualisation. They were attractive, but I was still more excited by some fantastic Vuillard taking pattern to the max in the adjoining room… 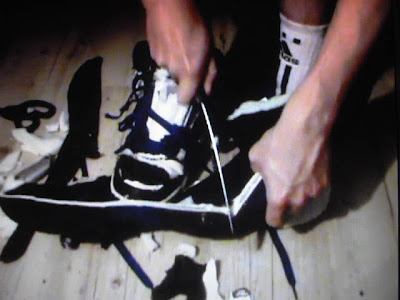 Charlotte Prodger: ‘:-*’ at the Centre for Contemporary Arts Intermedia Gallery

Charlotte Prodger presents a complex but compelling installation which draws analogies between structural film and themes of obsession and obsolescence in popular/gay culture using four elements: on-line footage of the fetishisation of black and white Nike trainers, including cutting and pulling them apart in what seems a rather sexual desire to see and understand all of an adored object; a double 8mm film splitter standing in for how mid-sixties artists deconstructed film into its constituent elements; a Sharp GF 777 boombox, now more for display than for use on the street; and a fragmentary narrative playing on it which links all that to the opening and closing of the blinds in a sex club in Berlin… ‘Phew!’ you might say, and yes, it was a bit amazing that it worked… 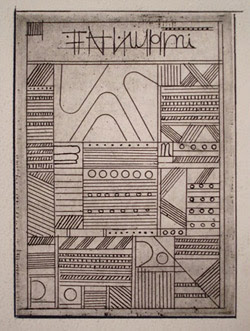 Los Angeles painter David Korty has produced a new stream of work in the past few months while living in Vancouver – but with this Glasgow show in mind. They’re modest works on paper which take the organisation of a newspaper as their template, thus connecting to Korty’s established interest in communication and design in everyday living. The text is reduced to patterns without letters, so that information is represented but not transmitted. There are Dada, Constructivist, Bauhaus and Minimalist echoes. Puns emerge between ‘pages’ such as collaged-on paper from a hole-puncher and equally-sized circles made on the surface and – by way of Scots tribute perhaps – they all smuggle in a version of St Andrew’s Cross. I found myself liking them more the more I looked.

Erica Eyres: ‘Inside the Minds’ at Southside Studios and Moyra Davey: ‘Les Goddesses’ at Tramway

The Festival is fairly light on films, but two of the few are outstanding – and both made by Canadians. Erica Eyres’ elliptical yet stark tale of apparent abuse, ‘Inside the Minds’, is well hidden at the back of the Southside artists’ studios near Queens Park (but you can see it here: http://vimeo.com/40407725). It travels a long way in five minutes, even though most of it shows a whitewashed wall. Moyra Davey’s far more expansive ‘Les Goddesses’ takes an indirect and multi-stranded hour to relate the artist’s own family history through the project of describing Mary Wollstonecraft’s. This is told through Davey pacing her flat repeating into a Dictaphone the apparently pre-recorded words feeding into one ear. That amplifies the contrast between the diaristic and the measured which is one of the many themes – Goethe, muses, Rome, Freud, adolescence, siblinghood, Benjamin, laudanum and writing in public – woven into Davey’s intimately hesitant meditation.

Wolfgang Tillmans: ‘Works from the Arts Council Collection, ‘Onion’ and ‘Headlights’’ at The Common Guild

A clumsy, if descriptive, heading for a wide representation of Tillmans’ subjects through 32 photographs presented in a typically diverse manner all around a Victorian townhouse. Plenty of known favourites are included, and an apparent match-up between the organic patterning in waterfall and trees worked beautifully. The highlights, though, consistent with Tillmans’ ability to refocus the banal, were the new subject of car headlights: as you climbed the stairs you saw a small non-matching pair directly, then a much bigger-than-life-size single headlight first in a mirror, car rear-view style; and only later directly, on the stairwell wall above you.

Folkert de Jong: ‘The Immortals’ at the Mackintosh Gallery, Glasgow School of Art

The Dutch artist makes his groups of figures by recasting elements using the ‘unethical’ industrial material of Styrofoam, which is both environmentally contaminating (as it won’t beak down) and dangerous in itself – so much so that de Jong has to wear a gas mask when working, and the process degrades the cast, so causing each repetition to vary. He clearly relishes his material, though, and it’s suited such sardonic takes on corruption and imperialism as his masterful groups of pirate traders. Applying it to Mackintosh’s circle played neatly off their self-given name (‘The Immortals’) and the role of more perfect plaster casts (included in the installation) as drawing models in the School – but it didn’t feel comparably urgent. 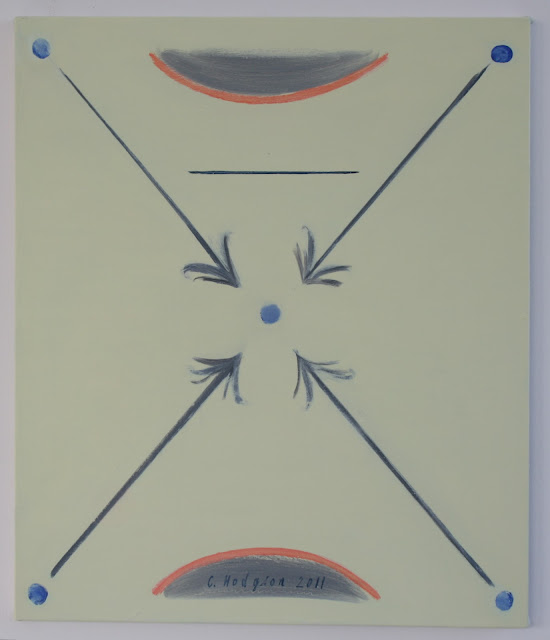 Clive Hodgson: ‘Untitled’ in ‘Ever Since I Put Your Picture in a Frame’ at 42 Carlton Place

Painter couple Carol Rhodes and Merlin James have converted the ground floor of their elegant Clydeside house into a project space. The first show, curated by the latter, is a comparably elegant selection of paintings. Clive Hodgson will have the first solo show here, and can currently be seen at London’s Standpoint Gallery. Here his feathery, delicately- hued ‘Untitled’, pointing only towards its own absence of a dominant direction, seemed to tremor with the freshness of having just tipped into abstraction. 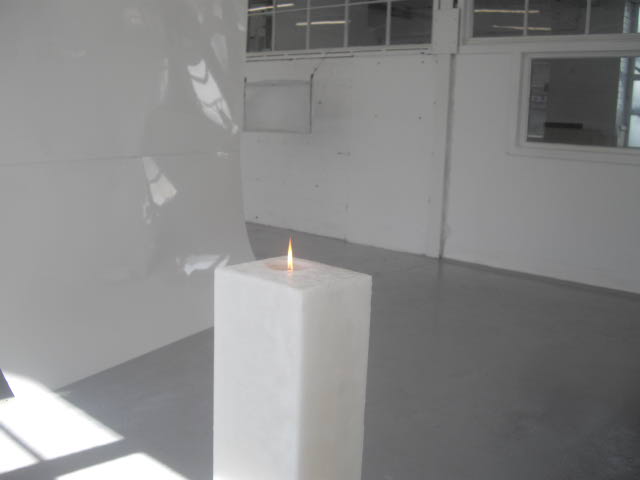 This Swiss-Scottish dual show makes beautifully poised use of a newly available East End industrial unit, which the work serves to dissolve. Rüthemann has leaned pseudo-ill-fitting steel sheets against the internal girders to exaggerate how they already divide the room. Robertson co-opts the space into how her works change state: they include a wax plinth-come-candle big enough to burn through the entire six week run; crumpled paper cast in concrete; and the projection of a screen saver with a bouncing sun motif onto a screen of ice which melts away in the course of each day.