The highly regarded GLASGOW PRINT STUDIO will soon be 50. Incredible. Half a century ago its humble beginnings in a rundown former electricians was created from nothing by a group of penniless volunteers – dedicated Glasgow Art School post-graduates wanting a place to work.

Financial issues never quite go away, yet are always surmountable. CoVid 19 is totally different. Yet the shop and beautiful GPS gallery – one of Scotland’s best spaces – both opened on August 4th and the workshop followed a week later. Members were very eager to leave temporary home studios or kitchen tables and get back to real life, proper printing! 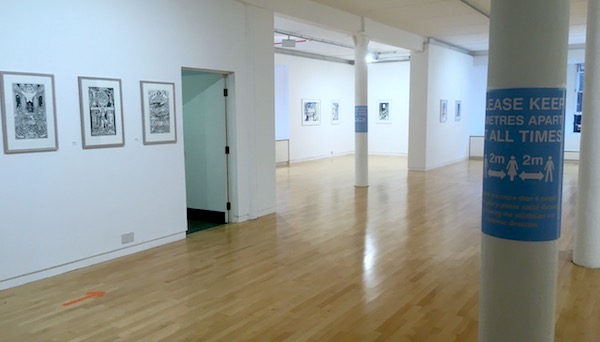 How is it going? Pretty well, despite a lot of rules and regulations plus limited hours. Workshop manager Claire Forsyth & team, (who spent Lockdown making parts for 7000 visors & PPE) do a superb job. Happily, for members, the shop is right there ready to exhibit and sell work made on the premises.

The current main GPS show is of prints by Alasdair Gray – feted since 1981 for his seminal novel, Lanark, plus his lithographic illustrations coinciding with its publication. A Glasgow Art School graduate with an inimitable graphic style, who also painted many murals, printmaking was important to him. His written language was intrinsically intertwined with the visual. In 2008 he completed the series of screenprints, The Scots Hippo, based on T. S. Elliot’s poem, The Hippopotamus, Refused permission to use the original by the estate, he simply reworked the poem into Scots language!

A second small show, Our Lives in Print Print, funded by William Grant Foundation, involves an outreach project with local communities. Participants researched the archive & made work inspired by the prints of established women artist members. The mixed results are shown in the lobby and one shop wall.

Unfortunately this cursory, token mention of women like Jacki Parry, Sheena Mcgregor, Beth Fisher or Elspeth Lamb, essentially the key founders and workers without whom GPS would not exist, is inadequate. The exhibition listings also lack basic bios, dates and information, as does the archive. In the early days and too long after, women were sidelined. It is no longer the case I trust; the current generation would not stand for it. However using their donated prints, and sticking them in the lobby, is no way to assuage several decades of neglect. A major exhibition documenting the first decade, showcasing the founders and St Vincent Crescent members, is required. The archive itself also needs a more professional approach.

Beth Fisher, instrumental in starting GPS, arrived in Glasgow with a press, “a lightweight Meeker Mcfee acquired cheaply from Wisconsin Uni where I did my MFA.” It was 1971, she needed a job, and was told by artist George Donald to go meet the legendary Phillip Reeves, head of printmaking at GSA. “Phillip soon got me teaching an evening class. There was a bunch of great GSA students. Where were they to work post-graduation? As a founder of Edinburgh printmakers, Philip assumed artists would travel there. But why not set one up in Glasgow? And I had a press!”

It’s a long story – but so began an exciting, exhausting, complex, crazy time. “We had great support from the Scottish Arts Council, but you can’t apply for funds unless you have premises. You can’t rent the premises unless you have funds. Catch 22.” Sheena found the St Vincent Crescent place. Beth got GPS incorporated as a limited company, February 27th 1973. I joined GPS that year. Funds from the Gulbenkian Foundation enabled evening classes. I had a Fine Art degree but had never done screenprinting, so went to learn. I became secretary, then chairman. Later as a critic, I reviewed many exhibitions, watched GPS grow, develop.

It was often financially turbulent. A long-ago chairman of an extraordinary general meeting in the 1980s made a memorable remark. “It’s like re-arranging the deck chairs on the Titanic!” 1973 revenue funding was £1,900. Staff were paid £11 a week. Session fees were 25p for 3 hrs. (It’s now six quid.) GPS was essentially a non-profit co-operative run by artists for artists. Now it’s big business. Today GPS gets £198k: £160k from Creative Scotland plus £38k from Glasgow City Council.

Like the world over, I never expected anything like CoVid. It’s still a wonderful place, epoch-making, memorable, not perfect, but moving forward in difficult times. As Claire Forsyth says, “We’re in this together. We’ll need to refine procedures, review protocols as we go along. But we’ll get there!