Grayson Perry’s timely pair of vases depicting Brexit, one leave the other remain go on permanent display in the V&A’s Ceramics Galleries from today.

Created in 2017 in response to the vast social and political rift caused by Brexit, each vase depicts supporters of Leave and Remain. This major acquisition from one of the UK’s most celebrated and popular artists goes on display to coincide with the date that Britain was initially scheduled to leave the EU. The works have been purchased with the support of the Ruddock Foundation for the Arts, V&A Members, Sarah Nichols, the William Brake Charitable Trust and an anonymous donor.

They will look magnificent at the V&A, a museum I am very fond of, where they can be seen by anyone for free for years to come – GP

Monumental in size, both stand at over a metre-tall and are decorated with sgraffito figures and transfer-printed images. The similarity of the Leave and Remain vases prompted their title, Matching Pair. 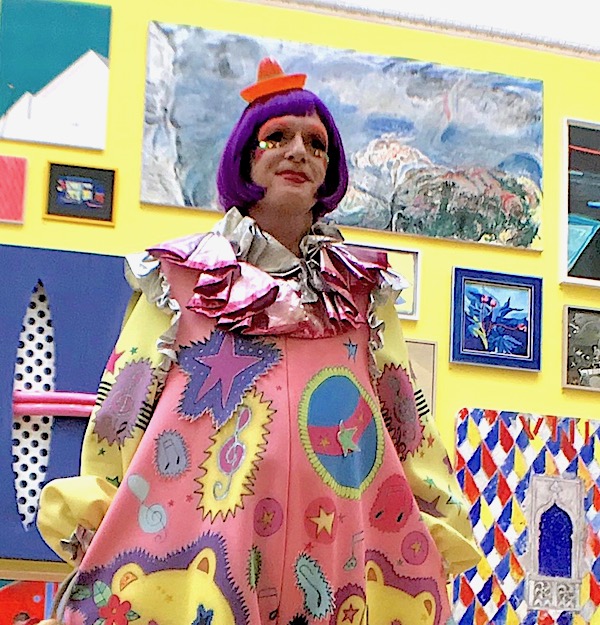 Perry took a new approach to the creative process of decorating the vases by crowdsourcing ideas, photographs and phrases via social media. Posting videos on Facebook and Twitter, he asked Leave and Remain voters to choose their favourite brands and colours, define Britishness, share pictures of their tattoos and send selfies. Both are finished in a blue glaze – the preferred colour of both sides.

Contributions from twenty-four members of the public on Brexit and Britishness feature, including teapots, bacon and eggs, marmite, families by the seaside, walking the dog, and the pub. Alongside, pictures of Barack Obama, Gandhi, Shakespeare, Gary Lineker, Gina Miller and the late MP Jo Cox, logos for Waitrose and the NHS are displayed on the Remain vase. On the Leave, vase are images of Nigel Farage, Winston Churchill, the Queen, and the Cadbury’s logo. The making of the work and the issues it addresses were explored in Channel 4’s 2017 documentary, Grayson Perry: Divided Britain.

Alun Graves, Senior Curator of Ceramics, Sculpture and Metalwork, said: “Grayson Perry’s Matching Pair sees one of Britain’s greatest artists and social commentators addressing the most significant political event of our times. And it is appropriate that he has done so through images and ideas put forward by the wider public. It is absolutely fitting that the V&A has acquired these hugely important works, and we hope that people will come to our world-class Ceramics Galleries to see them, and to explore what they have to say about the Brexit debate.”

Grayson Perry, said: “I am so pleased that the V&A has acquired these pots. They were made collaboratively with people from all walks of life, for Britain’s mantlepiece. They will look magnificent at the V&A, a museum I am very fond of, where they can be seen by anyone for free for years to come.

“I have always been wary of audience participation in art. But I thought it would be an exciting experiment to crowdsource in this work. I first wanted to address what felt like a massive rift in British society, caused by something that no one seemed that bothered about a few years before the vote.

“Maybe it is a bit utopian to say: ‘We are in this together! We all have a shared identity!’ But you’ve got to start somewhere. It’s important to talk to people that we don’t necessarily agree with and listen to what they have to say. The two pots came out looking remarkably similar, which is a good result, for it shows that we all have much more in common than that which separates us.”

Perry’s Matching Pair vases will complement the V&A’s existing holdings of works by the artist, including an essential early ceramic, My Heroes (1994), acquired in 2009, a pair of linocut self- portrait prints Mr and Mrs Perry (2006) and a glazed ceramic wall tile made for the exterior of A House for Essex (2015). The wall tile is currently on loan to Blackburn Museum to support the teaching of art, design and technology in secondary schools, as part of the V&A’s flagship national educational initiative DesignLab Nation.

The V&A’s Ceramics collections are unrivalled anywhere in the world. Comprehensive and global in scope, they encompass the history of fine ceramic production from about 2500 BC to the present day. The collections are particularly strong in international contemporary studio ceramics, European porcelain and pottery from 1500 onwards, and ceramics from China, Japan and the Middle East. Highlights include the collections of Italian Renaissance maiolica, Chinese porcelain, Dutch Delft, British and European porcelain, 19th-century art pottery and exhibition pieces, and tiles.

Grayson Perry was born in Chelmsford, Essex in 1960, Grayson Perry lives and works in London. Winner of the 2003 Turner Prize, Perry has exhibited in museums worldwide. Institutional venues for recent solo exhibitions by the artist include the Monnaie de Paris (2018 – 2019); Kiasma, Helsinki (2018); The Serpentine Galleries, London (2017); Arnolfini, Bristol (2017); ARoS Aarhus Art Museum, Aarhus (2016); Bonnefantenmuseum, Maastricht (2016); Museum of Contemporary Art, Sydney (2015 – 2016). Perry has also curated several major exhibitions, most recently the critically acclaimed 250th Summer Exhibition at London’s Royal Academy (2018) and the Tomb of the Unknown Craftsman at the British Museum, London (2011-2012). Other significant projects include A House for Essex (building designed in collaboration with FAT Architecture) and The Vanity of Small Differences (monumental suite of tapestries exploring the subject of taste in contemporary Britain). The making of these works was chronicled in the first of Perry’s Channel 4 television series, All In the Best Possible Taste (2013 BAFTA Winner). Further TV programs include Who Are You? (2014 BAFTA Winner), All Man (2016), Grayson Perry: Divided Britain (2017) and Rites of Passage (2018). Perry was elected a Royal Academician in 2012, was awarded the title Commander of the Most Excellent Order of the British Empire (CBE) in 2013, and currently serves on the Board of Trustees at the British Museum in London.