Two works by Grenfell victim Khadija Saye are to go under the hammer today at Christie’s, with profits from the sale going towards creating the Khadija Saye IntoArts Programme. This will be an arts education scheme launching in early 2019, supported by IntoUniversity, a UK charity set up for learning centres for young people from disadvantaged backgrounds. Saye’s interest in photography was aided by this programme.

Khadija Saye died age 24 in the tragic Grenfell fire, which claimed 71 lives. Born in London, Saye lived with her Gambian mother in Grenfell Tower. She had gone to a local school, but at 16 won a full scholarship to the prestigious Rugby school. After finishing school, Saye went on to study at the University for the Creative Arts, where she was part of a tightly knit group of four women who lived and created together. 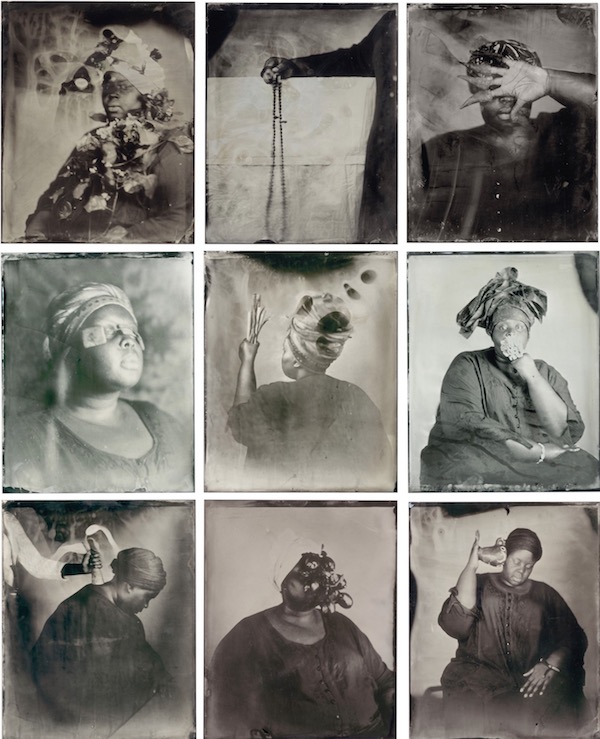 In early 2017, the artist Khadija Saye completed a series of nine tintype photographs she called Dwelling: in this space we breathe.

In early 2017, the artist Khadija Saye completed a series of nine tintype photographs she called Dwelling: in this space we breathe. Each work was a self-portrait, in which Saye performed a different, time-honoured, Gambian spiritual ritual.

‘The series was intensely personal for Khadija,’ says her former mentor, the artist Nicola Green. ‘She drew on subject matter she cared deeply about… exploring the emotions, feelings and consequences of her journey and heritage.’

Though she was born and brought up in London, Saye’s parents were from The Gambia — and in Dwelling… she can be seen exploring their Muslim and Christian heritage and holding various objects that are considered sacred in The Gambia, such as a cow horn and incense burner. The artist herself referred to the series as charting ‘the deep-rooted urge to find solace in a higher power.’

The works are the first from the artist to be auctioned and include Nak Bejjen (2017), a wet collodion tintype. This is one of the six works exhibited in the Diaspora Pavilion at the Venice Biennale in 2017. The other three series Dwelling works: in this space, we breathe destroyed in the fire. It carries an estimate of £10,000 to £15,000 and comes directly from the Artist’s estate.

Also on sale will be a portfolio box of nine silkscreen prints estimated at £7,000 to £10,000 this is the entire Dwelling series. “Khadija had taken scans of the tintypes that were destroyed, which we were able to recover, so we have made the silkscreens from them,” artist Nicola Green who organised the Diaspora Pavilion and employed Saye as a studio assistant after meeting her in 2014. The portfolio was produced in collaboration with Jealous Gallery and Saye’s estate. The remaining 49 portfolio boxes from the series will be available for sale later this year.