It has been a rather tumultuous few years for the gallery and the team, after a breakdown in relations between the Jerwood Foundation and the gallery’s management. In 2016. The foundation told the board that it would not provide funding beyond 2019. This was perhaps the best thing that could ever have happen to the gallery and its programme.

Hastings Contemporary director Liz Gilmore told me that this will allow the gallery to show international artists for the first time. It also removes the limitations of having to exclusively show artists from the Jerwood collection. 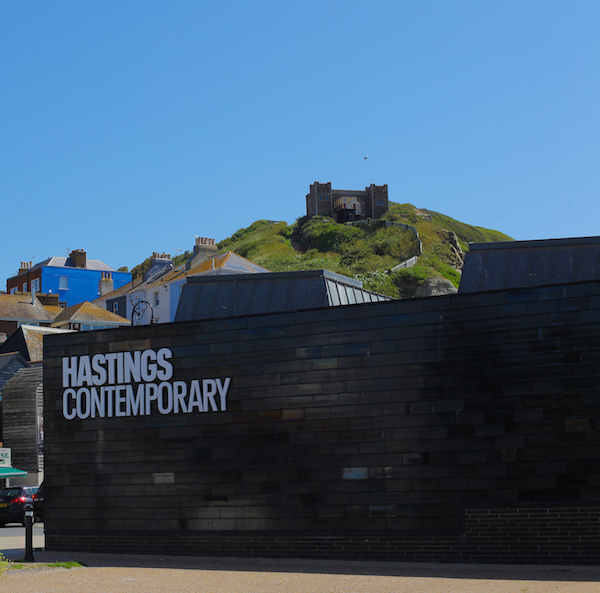 The gallery, whose primary support came from the Jerwood Foundation announced in 2016 that their future was up in the air after funding from Jerwood was reduced, but after an anonymous donation of £250,000, a new phase of philanthropic support began. In 2017, the gallery became an independent charity and received a £400,000 grant from Arts Council England for four years.

By the show of support from the Director of Arts Council England, Sir Nicholas Serota, who gave the main dedication speech on Tuesday, the gallery will now grow and become the independent asset that Hasting so desperately needs.

Seven years after opening on the historic Stade on the seafront in Hastings, Hastings Contemporary – a new, independent modern and contemporary art gallery is a going concern.

Since its launch in 2012, the gallery has built an acclaimed exhibition programme and has been a cornerstone of the cultural renaissance of Hastings, welcoming over 300,000 visitors. Hastings Contemporary will have a refreshed curatorial direction under Jerwood Gallery’s founding Director, Liz Gilmore.

Hasting Contemporary’s expanded programme will now be able to explore all forms of modern and contemporary art, as well as continuing to champion the medium of painting, for which it has built a strong reputation. The gallery was shortlisted for Jake & Dinos Chapman: In the Realm of the Unmentionable in the Temporary/Touring Exhibition category for the 2015 Museum awards.

Tal R: eventually, all museums will be ships that explore the work of international contemporary artist Tal R and reveal new works. Tal R works with a wide range of media from painting to textile design, sculpture to video art, and he continually renews and enriches his artistic practice and way of working. Known for his unique ability to experiment, reinterpret and create again, Tal R is a versatile artist whose work explores and takes inspiration from his surroundings. The exhibition title, which both befits the iconic, ancient fishing beach flanking Hastings Contemporary and recent evolution of the gallery to its new independent status, is a nod to the content of the exhibition and also a poetic reference to the artist’s creative process.

Roy Oxlade: Shine Out Fair Sun is the first significant public gallery exhibition of British artist Roy Oxlade (1924-2014). Described in the Guardian as ‘one of the most impressive British painters of the past 50 years’, Roy Oxlade was an artist, art writer and highly influential teacher. Oxlade’s approach to painting was instinctual, energetic and bold, and he was well known for his compelling use of colour.

Roy Oxlade: Shine Out Fair Sun features work from over 50 years of Oxlade’s artistic output, including some of his earliest paintings produced in the 1950s while studying under David Bomberg, alongside Frank Auerbach and Leon Kossoff. This exhibition allows visitors to encounter a prolific and previously overlooked artist’s vision that impressed many of his students and contemporaries. Oxlade believed that art should be rooted in nature and the artist’s immediate surroundings, taking inspiration from the objects of daily life, ‘things, trees, houses, cats, people’. In keeping with this belief, Oxlade’s work reflects his everyday life living and working alongside his wife and fellow artist Rose Wylie RA on the South East coast of England not far from Hastings.

Both Tal R and Roy Oxlade are credited with invigorating the rich painterly tradition through their creativity and teaching and influencing the next generation of artists. Hastings Contemporary’s inaugural exhibition, in turn, brings together two artists who knew of each other and admired the other’s work from afar. Speaking in 2008, Oxlade remarked that Tal R “continues to be one of the best and most promising of today’s artists.”

On the choice of Hastings Contemporary’s inaugural artists, Director Liz Gilmore stated: “We are excited to launch Hastings Contemporary with major exhibitions of Tal R and Roy Oxlade alongside a one-room display of David Bomberg and our Artist Patron Sir Quentin Blake. The extraordinary talents, abundant creativity and intuitive approach of each artist, fly the flag for painting. We’re excited to be launching this new chapter in Hastings history and to continue to bring world-class exhibitions to our cherished sea-side town.” 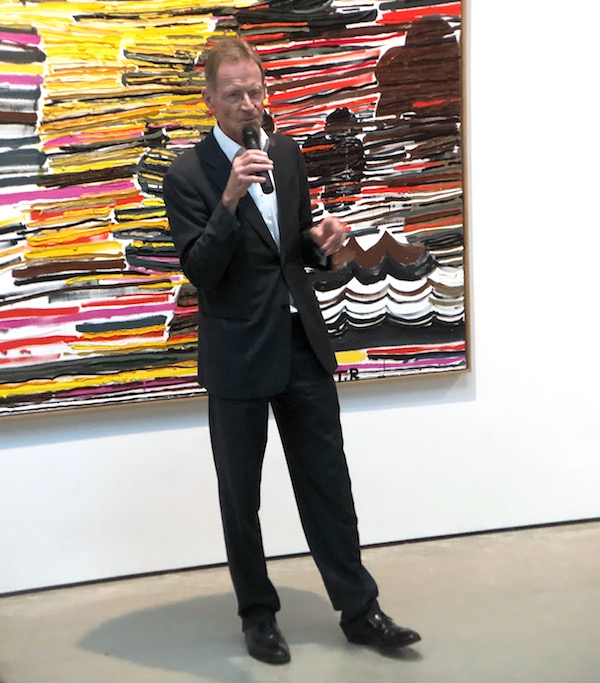 Sir Nicholas Serota, Chair, Arts Council England has said: “The opening of Hastings Contemporary marks a new chapter for a gallery that has already made a big impact in the life of the town and has won a reputation for presenting exciting shows in its award-winning building.”

Alongside these two significant presentations, Hastings Contemporary also presents Roy Oxlade & David Bomberg a display exploring the relationship between teacher and student through the works of David Bomberg (1890-1957) and his student Roy Oxlade. The exhibition, made possible by a partnership with the prestigious, private collection of Daniel Katz, showcases several critical works by David Bomberg that explore two of his main artistic themes: portraiture and landscape alongside early works by Roy Oxlade that illustrate Bomberg’s influence on the young artist. Both artists with their own distinct practice, Bomberg and Oxlade shared many ideas: they both believed that objects and places should be central to an artist’s approach and rejected traditional academic teaching.

Sir Quentin Blake (b. 1932), has had a home in Hastings for nearly 40 years and has continuously supported the gallery. He is Hastings Contemporary’s first Artist Patron and has produced new works for the opening of the gallery. For this new exhibition Quentin Blake: The New Dress, Blake has responded to the transformation of the gallery by producing a series of delicate sketchbook drawings of characters exploring change and structure via fashioned outfits. All works featured have been created using graphite on paper.