The artist Heather Phillipson quietly unveiled her fourth plinth commission in Trafalgar Square, yesterday with a lack of fanfare not seen before in past unveilings.

It is the 13th Fourth Plinth commission since the programme began in 1998, it is also the tallest to date, measuring 9.4m and weighing 9 tonnes, and follows on from The Invisible Enemy Should Not Exist by Michael Rakowitz. Both artists were selected in 2017 by the Fourth Plinth Commission Group, following an exhibition at the National Gallery where 10,000 people voted for their favourite shortlisted artwork.

Heather Phillipson’s vast physical and digital sculpture tops the Fourth Plinth with a giant swirl of whipped cream, a cherry, a fly and a drone that transmits a live feed of Trafalgar Square. Entitled THE END it suggests both exuberance and unease, responding to Trafalgar Square as a site of celebration and protest, that is shared with other forms of life. The live feed of Trafalgar Square picked up by the drone’s camera is visible on a dedicated website www.theend.today giving a sculpture’s eye perspective. 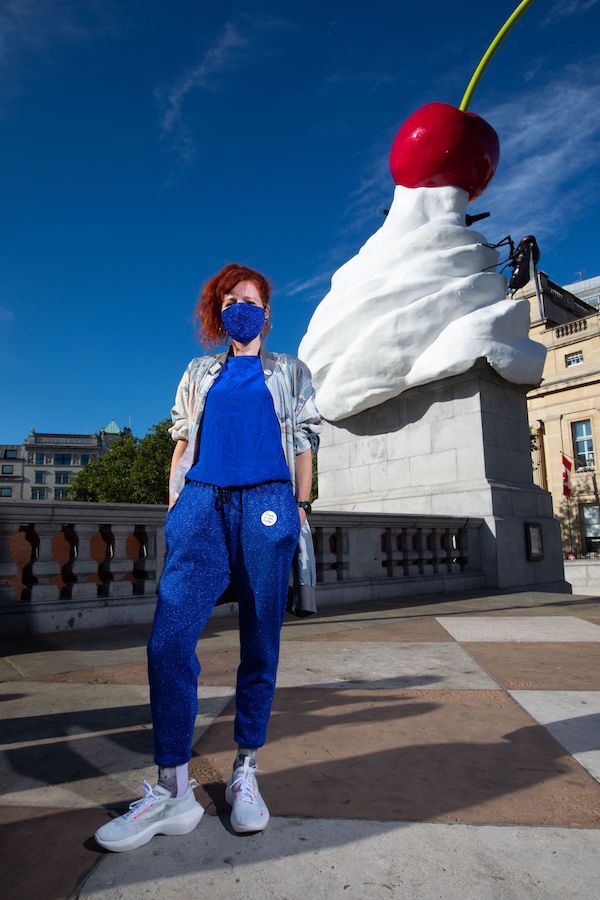 The Fourth Plinth is known across the globe for bringing world class contemporary art to London’s most prominent historical public square. For two decades it has showcased the work of great artists from around the world who have not shied away from tackling the important issues of the day. Yinka Shonibare CBE considered the legacy of British colonialism in Nelson’s Ship in a Bottle, Katharina Fritsch commented on gender equality and the masculine posturing in the square with her workHahn/Cock and Michael Rakowitz’s recreation of the Lamassu, a winged bull and protective deity that was destroyed in Nineveh (near modern day Mosul) in 2015 shone a light on the devastating impact of war on cultural heritage.

THE END is the first fully accessible commission on the Fourth Plinth. There is a braille panel included on the plaque, a tactile image of the work, and an audio description of the work on the GLA’s website.

Acknowledging the seismic global changes of the past few months, Heather Phillipson has also been commissioned by Art on the Underground to produce a new online work to accompany THE END. A counterpoint in tone to her Fourth Plinth work, Phillipson’s new audio-collage VOLTA reckons with upheaval, renewal and possibility and combines her distinctive layering of voice, sound effects and music samples. It is available on THE END’s dedicated website, as well as the Art on the Underground website, for the duration of the Fourth Plinth installation.

The unveiling of THE END was delayed by four months by the impact of the coronavirus. It will be in situ until spring 2022.

Heather Phillipson said: “When I conceived of THE END, I wanted to take into account both the political and physical aspects of Trafalgar Square and the plinth. I’m honoured to have been selected to make work for such a significant public site, and to see THE END scaled up for its ultimate size and context – one in which the surrounding architecture and its population are participants in a mis-scaled landscape, magnifying the banal, and our cohabitation with other lifeforms, to apocalyptic proportions.

“The Fourth Plinth is the world’s most famous public art prize and each new sculpture breathes fresh life into our public realm. When Heather’s work was selected two years ago we could never have imagined the world we find ourselves in today, but we always knew this sugary swirl with a dystopian flavour would spark a conversation.” – Justine Simons OBE, Deputy Mayor for Culture and Creative Industries

“THE END is an audacious and beguiling new work by Heather Phillipson. It expresses something of the fraught times that we’re currently living through while also standing in conversation with the artistic and social history of Trafalgar Square. I’m sure this will be a hugely popular commission that will inspire everyone who sees it physically and experiences it digitally.” – Ekow Eshun, Chair of the Fourth Plinth Commissioning Group, said:

Heather Phillipson works across video, sculpture, web projects, music, drawing and poetry. She has been selected as the next artist for the annual Tate Britain Commission, taking over the central Duveens Galleries with a new installation due to be unveiled in March 2021. Her recent solo projects include new commissions for Sharjah Biennial 14 and the Martin Gropius Bau, Berlin (both 2019), Art on the Underground’s flagship site at Gloucester Road, an online work for the Museum of Contemporary Art Chicago and a major solo show at BALTIC Centre for Contemporary Art (all in 2018). Phillipson received the Film London Jarman Award in 2016, the European Short Film Festival selection from the International Film Festival Rotterdam in 2018 and is also an award-winning poet.

The first comprehensive monograph of work by Heather Phillipson has been published to coincide with the unveiling of the Fourth Plinth commission, covering the artist’s expansive practice across video, sculpture, installation, music, poetry and digital media. It is co-published by Prestel and Art on the Underground in partnership with the GLA and BALTIC Centre for Contemporary Art.