A Major Art Collection including works by Barbara Hepworth and Keith Vaughan is to be sold on behalf of Hertfordshire County Council to fund much-stretched services but should this be happening at all? And will they squander the funds raised on everything but enriching the art community in the area?

A significant collection of paintings by Hertfordshire County Council will be offered for sale to the public at Cheffins Fine Art Auctioneers in Cambridge on the 21st March. The council is selling 428 paintings from its 1,828-strong art collection, and those on offer at Cheffins feature works from some of the most renowned British artists of the 20th century. 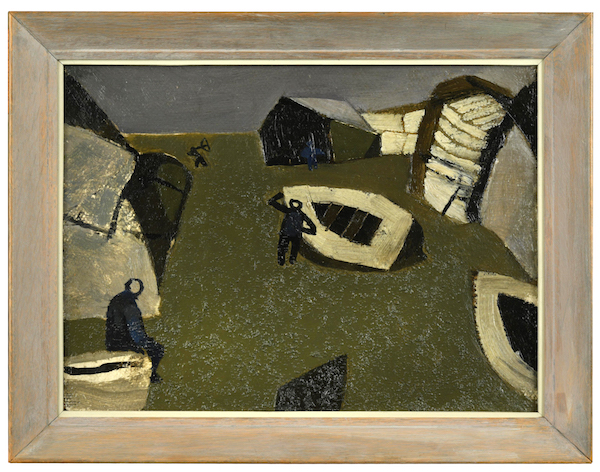 The County Council’s compilation was started in 1949 as part of the School Loan Collection, a post-war initiative by Sir John Newsom, the Hertfordshire Chief Education Officer at the time. The initiative involved obtaining artworks from contemporary British artists for schools to borrow from the council, therefore improving the educational experience of schoolchildren in Hertfordshire schools by exposure to real, contemporary art. Many of the pieces were purchased from reputable dealers, artists and the ‘Pictures for Schools’ exhibitions which took place from the 1950s and 1960s. The service has become less relevant to the evolving curriculum as students have had the opportunity to experience art in new ways, such as gallery visits or through modern technology. It was suspended in 2012 and permanently discontinued in 2017.

Brett Tryner, Associate at Cheffins who is handling the sale comments: “The selection on offer at Cheffins features works from some of the most renowned British artists of the 20th century; from the surrealist John Tunnard to the Vorticist artist, Edward Wadsworth. Also included in the collection is a picture from one of the greatest woman artists of the period, Barbara Hepworth, and other prominent painters such as Carel Weight, Julian Trevelyan, Michael Ayrton, Keith Vaughan, and John Minton. This important collection is representative of the post-war artistic period, and we are honoured to be able to offer these works for sale on behalf of Hertfordshire County Council. Many of the artists featured have seen a new-found appreciation over the past decade, with many of these post-war painters now achieving stellar prices at auction. Although many of the artists had a strong reputation at the time of the council’s purchase, the vast proportion were often overlooked in place of bigger names from Europe or further afield. New-found appreciation, retrospectives, and recent academic publications have helped to grow a burgeoning market for these artists amongst mainly UK-based collectors, galleries and institutions.”

The highlight of the collection is a pastel work by much-loved Scottish artist, Joan Eardley, which has an estimate of £12,000 – £18,000. Also from Scotland is a picture called ‘Blue Plate’ by Edinburgh School artist, Anne Redpath, which has an estimate of £10,000 – £15,000 and a still life by Robert MacBryde, which has an estimate of £7,000 – £10,000. A surrealist picture from John Tunnard which is titled ‘Brandis 1944’ is estimated to make £10,000 – £15,000. Closer to home, are a series of pictures by artists from the renowned Great Bardfield circle, based in Essex, including Kenneth Rowntree, Michael Rothenstein and George Chapman. The collection also represents the works of two artists from both the first and second world wars, John Nash and Richard Eurich. John Nash was official war artist from 1916 – 1918, his work, titled ‘The Paddock’ is set to make £2,000 – £3,000. Richard Eurich was a war artist during WWII, and three of his pictures are on offer, with the highest value being ‘Catching the Pony’ which has an estimate of £2,000 – £3,000.

Explaining the decision to sell these works, Councillor Terry Douris, Hertfordshire County Council’s Cabinet Member for Education, Libraries and Localism, said: “It is the sensible thing to do. With 60 per cent of the art collection in storage and not available to the public, the county council believes that the approach it is taking to the art collection balances its fiduciary duty to its council taxpayers to use the full resources available to it to best advantage, while aiming to achieve much-improved access and display of the retained collection for the public.”

Works being retained include four wall hangings by the pre-eminent British artist weaver, Peter Collingwood. One of these is displayed in the Welwyn Garden City library, and plans are being made for the three other works to be conserved and displayed for people to enjoy.