“The response to the sale has been quite remarkable, and I think Howard would have been taken aback by it” – Antony Peattie

A testament to the exceptional eye of British painter Howard Hodgkin has been finalised when the kaleidoscope of exquisite objects that the artist so carefully drew together in his home, exceeded pre-sale expectations and sold for a combined total of £5,184,887 / $6,843,532 / €5,806,049 (est. £2.5-3.8m). The contents of the auction, titled Howard Hodgkin: Portrait of the Artist, cast new light on the aesthetic innovations of one of the greatest artists of our time, revealing what inspired him and what he held close. For the first time, the public had the opportunity to see his work alongside objects from Italy to India that had inspired him. Following international exhibitions of sale highlights in Mumbai, Dubai and a full exhibition in Sotheby’s London galleries that attracted visitors in the thousands, bidders responded with enthusiasm, with many lots selling for multiples of their pre-sale estimate and 75% lots sold fetching prices above their pre-sale high estimate.

Howard longed to move people with his work, and the sale’s success suggests that there is a strong emotional link between him and the public. Sotheby’s called it “Portrait of the Artist” and it has given people an insight into Howard’s world, through his passion for objects. The sale has perhaps also opened up the magic world of Indian and Islamic art: as beautiful as it is accessible. He would have liked that. The sale is very much part of Howard’s legacy. The proceeds enable his letter of wishes to be honoured, and he would have been thrilled that his work has raised £366,000 for 11 very different charities, including the Mark Morris Dance Group, whose show Layla and Majnun, with Howard’s stage and costume designs, opens on Thursday 26th at the Rose Theater in New York, before travelling to London next autumn.” Antony Peattie, Howard Hodgkin’s partner, stated. 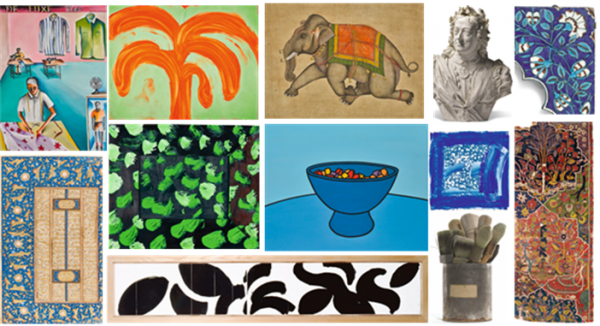 Chattels, a testament to the exceptional eye of British painter Howard Hodgkin

The top lot of the sale was one of the greatest works by Bhupen Khakhar ever to come to market, De-Luxe Tailors, which is the last of the seminal Tradesman series in private hands. The painting of 1972 (lot 110) soared above estimate to fetch £1,112,750 (est. £250,000–350,000) – a record price for the artist. It had previously been loaned by Hodgkin to feature prominently in the recent Tate retrospective of Khakhar’s work. The painting epitomises the artist’s early style and is a signature work from this period. Hodgkin was in many ways his mentor and some ways his liberator. Hosting Khakhar in England at various times in the late 1970s, finding him teaching positions and advocating for his works with galleries and museums, Hodgkin helped Khakhar to expand his horizons: his art seemed to become freer, looser, funnier and unflinchingly honest. It was Hodgkin’s friendship and encouragement that may have sparked Khakhar’s recognition as one of India’s greatest 20th-century artists.

Hodgkin’s friendships were powerfully represented in his collection by the works of fellow artists with whom he was particularly close and, crucially, those whose art he respected and admired. He once described Patrick Caulfield as “the closest I ever came to having a painter-colleague”, so is fitting that Caulfield’s Sweet Bowl of 1966 (lot 275) fetched £524,750 – the second-highest price for a work at auction following the price achieved for Foyer which sold in Sotheby’s sale of David Bowie’s collection last year. Two further works by Caulfield brought the combined total for works sold by the artist to £639,750: Patio (lot 276), painted in 1988, depicting a lamp fetched £110,000 (est. £50,000-80,000), and Jug (lot 279) fetched £5,000 (est. £4,000-6,000).

Hodgkin said in 1995 that ‘I have absolutely no desire to collect my own work…’ So it is significant that he kept Bedroom (lot 69) which featured in his debut show at the ICA with Allan Jones in 1962, and today fetched £248,750 – a record price for an early work by the artist. An iconic work by Hodgkin that featured in the sale was the Mural Design for British Council Building, New Delhi (lot 322), which sold for £81,250 (est. £25,000-35,000) – a record price for an original work on paper by the artist. The gouache on paper was created in preparation for his largest work, the giant mural cut from white marble and black granite on the façade of the British Council Building in New Delhi, which he completed in 1992. The combined total for all the works by Howard Hodgkin sold in the sale was £603,957.

Further work on paper, Study for Costume Design No.3, Layla and Majnun (lot 121), created for the production of the epic love story that stands as one of the most famous tragedies of classical Arabic literature, sold for £20,000 – more than double the pre-sale high estimate of £6,000-8,000. Hodgkin was delighted to collaborate with the Mark Morris Dance Group in designing the costumes and set for their new production of Layla and Majnun.

Hodgkin’s series Indian Views (lot 109) was inspired by the sights he encountered while travelling in an old-fashioned Indian railway carriage. This series of framed prints reached over three times its high estimate when it sold for £22,500 (est. £5,000-7,000).

Ornamentation was a prominent thread that ran through the great variety of objects Hodgkin was drawn to, from both India and Islamic cultures. He especially sought fragments – particular motifs, calligraphy, colours and textures appearing in ottoman, Indian and Islamic tiles, textiles and rugs:

Islamic Arts
Hodgkin collected individual tiles from different periods and countries, spanning Kashan, Iznik and Mughal. Strong prices were seen in today’s sale, including a 17th Century Mughal Pottery Tile (lot 378) from North India or Lahore was highly contested in the sale room, selling eventually for £60,000 (pre-sale estimate £3,000-5,000), while a tile that relates to a known series which originally belonged to a now lost Timurid monument, a Persian Calligraphic Lustre Pottery Tile (lot 149) attributable to 860AH/1455AD, which fetched £47,500 (est. 15,000-25,000). Two further tiles from the series are now in the V&A museum and the Metropolitan Museum of Art.

An extraordinary Persian manuscript Illuminated Leaf from Firdawsi’s Shahnamah (Lot 139A) soared about its pre-sale high estimate of £3,000-5,000 and sold for an impressive £23,125. Originally the left-hand side of an illuminated opening page of Firdawsi’s Shahnamah, the fine calligraphy is surrounded by a colourful and detailed border decorated with interlacing floral scrolls interspersed with human faces and animals’ heads.

Indian Art & Miniatures
Elephants were seemingly as highly prized by Hodgkin as in the Mughal court, featuring frequently in his collection. An Elephant Rampage dating to late 18th/early 19th century from North India, Rajasthan, Kota (lot 338) leapt to £32,500, over sixteen times its pre-sale estimate of £1,500-2,000, and the exquisite drawing Emperor Akbar Riding An Elephant On A Hunting Expedition (lot 96) fetched £37,500 (est. £12,000-18,000). The work, dated early 17th century, shows Akbar – who supposedly had 101 elephants for his personal use alone – riding one of his treasured elephants.

Rugs & Tapestries
Reflecting Hodgkin’s status as one of the greatest colourists of the last half-century his concern with colour is evident in his choice of carpets: the intense colour seen in a fragment of the magnificent 17th century Von Hirsch Garden Carpet from Northwest Persia (lot 241) which flew above its pre-sale estimate and sold for £224,750 (£80,000-120,000) – a masterpiece that had been split into four pieces, each section was sought after by collectors around the world including Hodgkin; a ‘Portuguese’ carpet fragment that sold for an impressive £137,400 (est. £40,000-70,000) – from Northeast Persia, Khorassan dating from the first half of the 17th century (lot 174) which illustrates both the very best of classical Persian dyeing skills and the mastery with which these colours were combined.

Three Mughal animal carpet fragments dating to the first quarter 17th century all exceeded pre-sale estimates: ‘Animal and Landscape’ Carpet fragment dating to the first quarter of the 17th century (lot 156), soared to £50,000 (est. £7,000-10,000); ‘Animal and Plamette’ Carpet Fragment (lot 180) sold for an outstanding £87,500, almost six times the pre-sale estimate of £10,000-15,000; and ‘Animal and Palmette’ Carpet Fragment (lot 191) sold for £28,000 (est. £8,000-12,000). A particular style of carpet developed in India at the beginning of the 17th century and exemplified by these fragments, these carpets are attributed to Lahore (then North India, now Pakistan) and show animals, palmettes and vine-scroll, arranged asymmetrically in an ascending format against red ground.

European Sculpture
Hodgkin was particularly drawn to sculpture as well as reliefs, in wood, in marble and engravings. Highlights of the sale include Bust of King George II by Michael Rysbrack of circa 1793 (lot 193) which sold above estimate for £162,500 (est. £80,000-120,000).

– An 86% sell-through rate: of 453 lots in the sale, 389 were sold
– A selection of Hodgkin’s works made a combined total of £603,957
– The combined total for works by Modern British Artists in the sale was £1,320,270
– Record prices: In addition to the record price for Bhupen Khakhar, and the record prices for an original work on paper and an early painting by Howard Hodgkin, a record price was achieved for William Henry Florio Hutchisson, among the leading European painters in Bengal after Geroge Chinnery, whose work was popular with the local Indian rulers. His oil on canvas A Nautch at the Court of Humayaun Jah, Nawab of Bengal (1810-1838) at Murshidabad, with the Nawab and the British Resident seated on the right (lot 32) fetched £25,000 – five times the pre-sale high estimate of £3,000-4,000.
Sotheby’s