A new stencilled mural by the street artist Banksy has appeared on a Hull bridge.  It was first spotted by passers-by on Thursday. The graffiti shows a small boy brandishing a wooden sword with a pencil attached to the end, carrying the slogan “Draw the raised bridge!” The work references the Brexit crisis.

Local Conservative councillor John Abbott said Banksy’s work did not compare with “real art” in the city gallery referring to the painting as an act of vandalism “I think that should be cleaned off. It should be photographed and the photograph kept because Banksy is not without talent,” said Mr Abbott. “But to compare Banksy for example with some of the real art in the Ferens Art Gallery, which is quite mind-bogglingly brilliant at times, is, shall we say, to judge by two different sets of standards.” He said graffiti of any kind placed on walls should be removed. 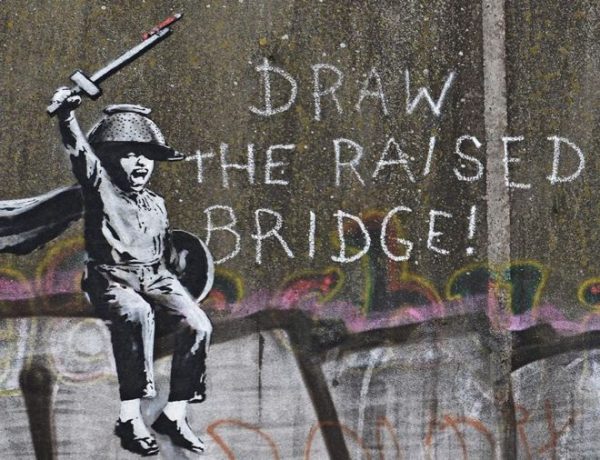 Last July Banksy’s Balloon Girl or Girl With A Balloon as it is officially titled, has been voted the nation’s favourite artwork. The populist poll sponsored by a new device which displays art as a TV screensaver when idling, spoke to over 2000 art enthusiasts to reach the verdict.  The study also found that contemporary artists had replaced old masters as the public’s favourites. Constable’s landscape, The Hay Wain was voted second. The 1821 masterpiece from the National Gallery collection has been a firm favourite for over a century.

Banksy is Britain’s best-known graffiti artist. His work typically includes satirical social and political commentary, and ranges from murals to sculpture and installation, often playing with the contextual aspects of the work. The artist’s first solo show was held in 2002 at Los Angeles’ 33 1/3 Gallery, and in 2003 he was commissioned to design to cover of Blur’s ThinkTank. Today, Banksy’s work appears internationally; most notably, he painted nine sardonic images on the Palestinian side of the West Bank barrier. In Summer 2009, Banksy took over the Bristol Museum and Art Gallery with an exhibition attracting over 300,000 visitors.. His Dismaland project in Weston Super Mere attracted tens of thousands of visitors and bosted the local economy by £20m. The prophetic street artist created a centerpiece fire-ravaged Disney-like castle with payday lender stalls and a remote controled boat game which highlights the plight of immigrants. The show on the pier featured a Jimmy Savile Punch and Judy, highlighting domestic abuse scripted by the journalist Julie Burchill.