Photographs from a number NASA missions, dating from 1965 to the 1980s go under the hammer as a single lot at Swann Auction Galleries NYC. The sale titled Icons & Images: Photographs & Photobooks takes place on 14 February. Their significance has been thrown even more into focus by the approaching 50th anniversary of the first Moon landing in 2019, which is attracting more collectors to this field. 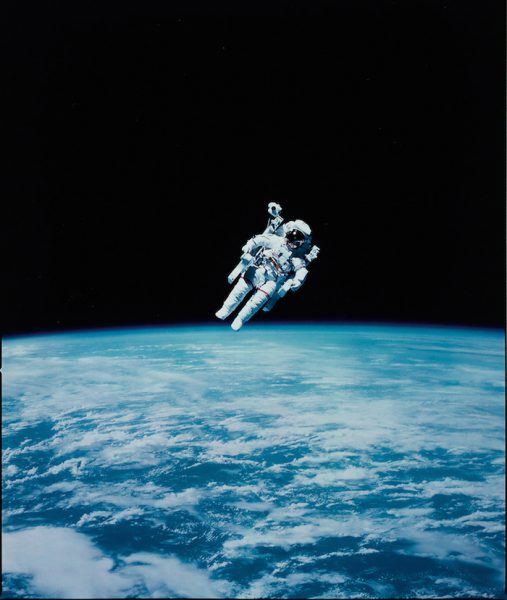 NASA Photos including this Spacewalk image offered at auction

The photos were selected from NASA’s archives by Barbara Hitchcock and Peter Riva and approved by several of the astronauts. The historic images were organised into a traveling exhibition by the Smithsonian Institution titled ‘Sightseeing: A Space Panorama’, 1985. Aside from the exhibition catalogue, many of the photos have never before been published by the space agency.

Featured are many iconic views of the historic Apollo 11 mission, showing Buzz Aldrin and Neil Armstrong setting foot on the Moon for the first time

Works include more breathtaking and iconic views of astronauts Bruce McCandless, Buzz Aldrin, Charles Duke, and Ed White as they traversed through space, taken during the Gemini IV, Apollo 11, Skylab 3, and STS-41-B (Space Shuttle Challenger) missions. An array of painterly and abstract topographical views of the Earth, as witnessed from beyond its atmosphere, completes the lot. 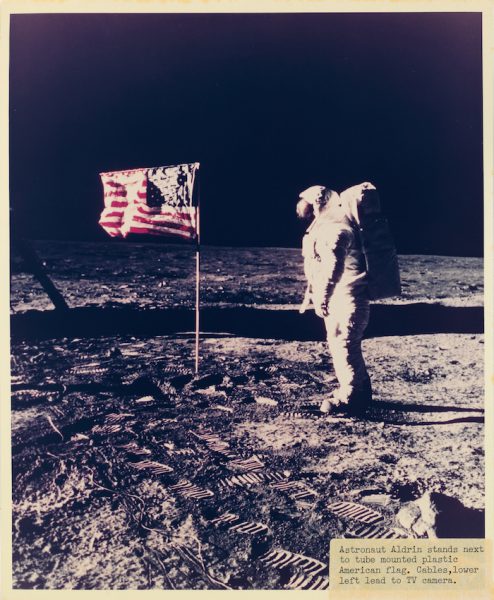 The auction also includes an archive of six binders containing approximately 280 photographs depicting Apollo Missions 10, 11, 12, 13, 15, 16, and 17, from launch to splashdown. Featured are many iconic views of the historic Apollo 11 mission, showing Buzz Aldrin and Neil Armstrong setting foot on the Moon for the first time, the memorable images of the plastic American flag, and Armstrong’s reflection in Aldrin’s helmet visor. Also included are multiple views of Earth as seen from outer space, and various photographs of astronauts performing scientific experiments on the Moon’s surface. There are 84 silver and 199 chromogenic prints in the binders, ranging in size from 4 x 5 ins to 8 x 8 ins and 8 x 10 ins. Some have captions affixed to recto, while many have notations on verso, in pencil and ink; also present are a number of reproductions after photographs as well as Apollo related ephemera in the form of decals, plaques, and letters, all dated 1969-72. The estimate is $7,000-10,000.

Further Space Age lots include a sequence of 10 photographic assemblages, each work depicting a separate section of the Moon (estimate: $5,000 to 7,500) and a collection of 67 photographs, arranged in mini-albums and frames, documenting the Apollo 11 Moon landing, many with date stamps on verso for 1969 (estimate: $4,000 to 6,000).  Swann Auction Galleries NYC