Painted on 25 October 1939, Femme assise, robe bleue is a searing portrait of Picasso’s lover, Dora Maar. Painted on the artist’s birthday just after the beginning of the World War II, the work is filled with the unique character, distortions and tension that mark Picasso’s greatest portraits of Dora; at the same time, there is a tender sensuality present in the organic, curvaceous forms of the face which provide some insight into their relationship. This picture was formerly owned by G. David Thompson, to whom the great curator and art historian Alfred H. Barr, Jr. referred as, ‘one of the great collectors of the art of our time.’ (A.H. Barr, Jr., ‘Foreword’, auction catalogue, Parke-Bernet, New York, 1966, n.p.).

Giovanna Bertazzoni, Deputy Chairman, Impressionist and Modern Art, remarked, “Femme assise, robe bleue is an extraordinary portrait of Picasso’s great Muse and love, Dora Maar. It exhibits all of the most exhilarating qualities that Dora brought out in Picasso’s work: the striking palette, ornate headwear, and remarkable complexity conveyed by Dora’s distorted features. The rich, thick twirls of oil depicting the mass of her hair (which Picasso was mesmerised by) and the shapes of her hat convey ‎the impetus and passion at the core of this portrait. We are bringing Femme assise, robe bleue to the market at a time when the demand for Picasso’s portraits of one of his greatest subjects, Dora Maar, is at an all-time high. The canvas is a powerful example of Picasso’s creative imagination and the passion which Dora inspired in him.” 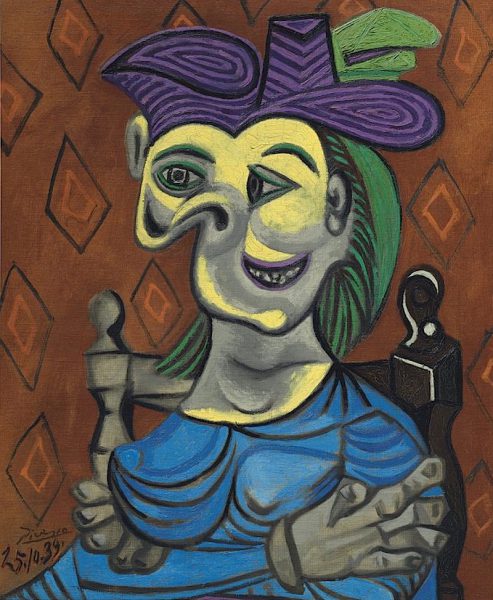 Picasso Portrait Of Dora Maar to be sold at Christie’s

Francis Outred, Chairman and Head of Post-War and Contemporary Art, EMERI continued: “Femme assise, robe bleue is a timeless icon of artist and muse which speaks to collectors across the centuries and continents.  Coming from a major European collection, the picture holds within it an incredible story.  It originally belonged to Picasso’s dealer, Paul Rosenberg but was confiscated in 1940 soon after its creation.  Later in the War it was intended to be transported to Germany but was famously intercepted and captured by members of the French Resistance, an event immortalised, albeit in fictional form, in the 1966 movie The Train, starring Burt Lancaster and Jeanne Moreau. In real life, one of the people who helped to sabotage the National Socialists’ attempt to remove countless artworks from France towards the end of the war was, in fact, Alexandre Rosenberg. The son of Paul Rosenberg, he had enlisted with the Free French Forces after the invasion of France in 1940.  The painting was subsequently owned by the Pittsburgh steel magnate and legendary collector, George David Thompson, from whose collection many works now grace the walls of museums in the United States and Europe.  We fully expect the romance and power of this painting and its remarkable story to capture the hearts and minds of our global collectors of masterpieces from Old Masters to Contemporary, this May.”