The eagerly awaited retrospective exhibition of the American artist Philip Guston, set to take place at Tate Modern in February 2021 has been postponed until 2024. This was due to the four museums indecision on whether to include anti-KKK paintings which “Might upset viewers”. Tate has yet to put anything out on their website or to the press directly at this writing. 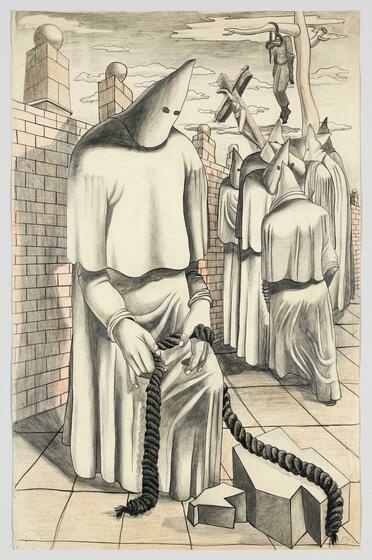 After a great deal of reflection and extensive consultation, our four institutions have jointly made the decision to delay our successive presentations of Philip Guston Now. We are postponing the exhibition until a time at which we think that the powerful message of social and racial justice that is at the center of Philip Guston’s work can be more clearly interpreted.

We recognize that the world we live in is very different from the one in which we first began to collaborate on this project five years ago. The racial justice movement that started in the U.S. and radiated to countries around the world, in addition to challenges of a global health crisis, have led us to pause.

As museum directors, we have a responsibility to meet the very real urgencies of the moment. We feel it is necessary to reframe our programming and, in this case, step back, and bring in additional perspectives and voices to shape how we present Guston’s work to our public. That process will take time.

Collectively and individually, we remain committed to Philip Guston and his work. We plan to rebuild the retrospective with time to reconsider the many important issues the work raises.

This show has been years in the planning, the result of a true collaborative spirit among us. We plan to present a reconsidered Guston exhibition in 2024 and will work together to do so.

Washington, DC—One of America’s greatest modern painters, Philip Guston (1913–1980) uniquely bridged the personal and the political, the abstract and the figurative, and the humorous and the tragic in paintings of lively touch and memorable impact. A major retrospective of the artist, Philip Guston Now, the first in more than 15 years, will present a balanced view of the artist’s 50-year career. Organized by the National Gallery of Art, Washington, the Museum of Fine Arts, Houston, Tate Modern, London, and the Museum of Fine Arts, Boston, the exhibition will be on view in the Gallery’s East Building from July 3 through October 3, 2021. 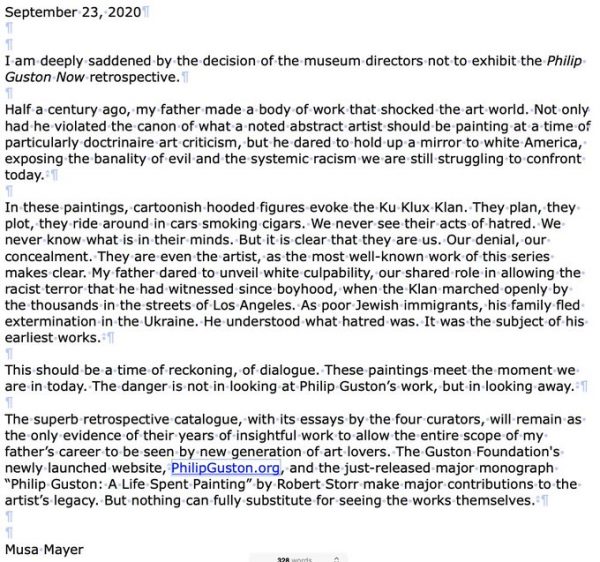 A selection of approximately 125 paintings and 70 drawings from some 40 public and private collections will feature well-known works as well as others that have rarely been seen. Highlights include paintings from the 1930s that have never been on public view; the largest reunion of paintings from his groundbreaking Marlborough Gallery show in 1970; a thorough representation of satirical drawings of Richard Nixon and his associates; a dazzling array of small panel paintings made in 1968–1972 as Guston was developing his new vocabulary of hoods, books, bricks, and shoes; and a powerful selection of large, often apocalyptic paintings of the later 1970s that form the artist’s last major artistic statement. A fully illustrated monograph will include essays by the exhibition’s co-curators and a richly illustrated chronology of his life and work, along with reflections by contemporary artists on their engagement with Guston and the impact of his work and legacy.

“Philip Guston’s paintings have inspired generations of artists while also defying easy definition,” said Kaywin Feldman, director, National Gallery of Art, Washington. “This exhibition will provide an in-depth look at the career that led to his iconic late paintings and will surely secure Guston’s place in the pantheon of modern art while reassessing his impact on the art of the present.”

We must never be afraid of confronting hate and this postponement is blatantly censoring Guston’s political views during times of civil unrest. He was an unabashed left-wing liberal anti-Nixon anti-Vietnam-War and especially anti-racist. Isn’t it the responsibility of Museums to present challenging images to the public, or are we going to get a watered-down form of curation similar to China?