The American artist Jeff Koons has been found guilty of copying an idea from an advertisement used by the French clothing chain Naf Naf. He has been fined along with the Pompidou Museum which exhibited the work of art during a retrospective exhibition in 2014.

The French advertising executive, Franck Davidovici, who brought the case to court will receive a total payout of 135,000 euros (154,000 dollars) in compensation. The decision came on Thursday, and it was ruled that Koons was guilty of plagiarism concerning the advert “Fait d’Hiver” from 1988, which shows a pig standing over a woman lying on her back, her arms sprawled behind her head. 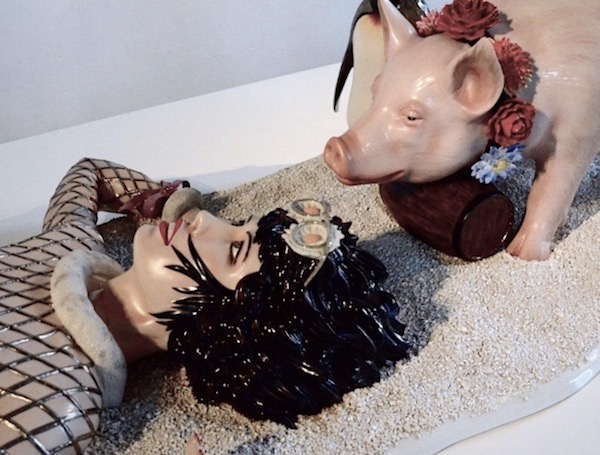 It was thought that it more than resembled a campaign created by Davidovici for the Naf Naf chain in the mid-1980s, down to the woman’s facial expression, hairstyle and the cask hanging from the pig’s neck. The Naf Naf campaign was also called Fait d’Hiver, a play on words suggesting “Winter News in Brief”.

The work of art of “Fait d’Hiver”, was made in an edition of four one was recently sold for around $4.7 million at Christie’s auction house in New York.

Jeff Koons LLC was also fined 11,000 euros for reproducing the pig on the artist’s website, while the Flammarion publishing firm was fined 2,000 euros for selling a book which contained the work.

The court didn’t order the seizure of the sculpture’s as requested by the plaintiff.

This is the second time Koons has been found guilty of forgery in a French court. In March 2017, a Paris court ruled he had copied a French photographer’s picture as the basis for his “Naked” sculpture; also part of the artist’s Banality series exhibited in the Pompidou exhibition”.

Fait d’Hiver was removed from the Koons retrospective at the Pompidou, according to a Pompidou spokesperson. The owner of the sculpture had requested the piece be returned before the end of the show’s run in Paris. Koons has been charged with plagiarism from this particular series, which is based on many kitsch images from the 1980s. String of Puppies (1988) and Wild Boy and Puppy (1988) are the other sculptures in question.

This raises many questions about the appropriation of photographs used in fine art. It is likely that a similar case in a US court would be dismissed as artists have the right to use images to create fine art but not commercial products such as t shirts.