JENNY SAVILLE’S show at the Scottish National Gallery of Modern Art (GMA), Edinburgh is long, LONG overdue. She has been famous for the last 26 years, exhibited widely in America, yet this is Scotland’s first chance to see her powerful signature larger-than-life, monumental nude paintings. Five rooms of superb, spectacular, exhilarating, extraordinary work covering 25 years – a major, memorable retrospective. You will be blown away.

“I was still up a ladder painting at 6 am this morning. You know me” – JS

I met her just as she arrived. “I was still up a ladder painting at 6 am this morning. You know me. We got the early flight up with the kids. I have this big show in New York in May, so so much to do. 17 works. The most I have ever produced for a show.” 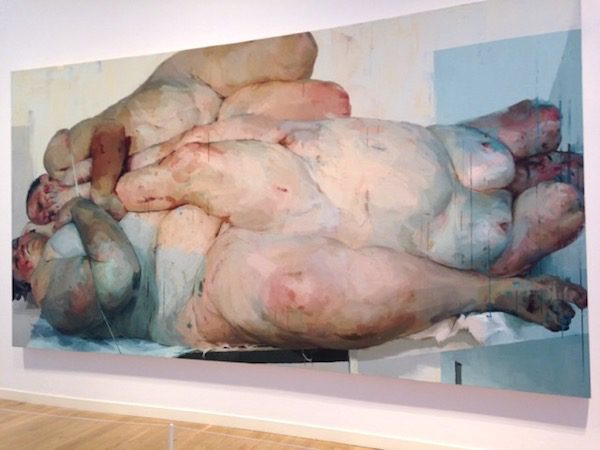 I do indeed know Jenny, and her seriously ambitious, workaholic, last minute, lovely perfectionist, traits. In 1992 I included Jenny Saville in my London Critics Choice exhibition, along with luminaries like my friend John Hoyland, David Mach, Marc Chaimowicz, and many more. An eclectic group with Michael Kidner, the eminence gris at 75 and Jenny the baby of 22. She had just graduated from Glasgow School of Art. Her work was already large-scale, arresting – and arrived late! I hung her biggest oil painting, Branded (the Scottish National Galleries have just acquired a study,) so that it could be seen from the street. The gallery was next to Waddingtons in Cork Street, then London’s main artery for contemporary art. Charles Saatchi regularly played bridge with Bernie Jacobson in his gallery just round the corner, so it was no surprise when straight after the opening, the phone rang and Saatchi demanded my Critics Choice show be opened at 8 am the next morning so he could view her work.

The rest, as they say, is history. Saatchi commandeered Saville for the next 4 and a half years till Larry Gagosian took over in 1997. Branded sold for £1.5m in 2011. The price we had on her work in 1992 was around £600. Maybe less. The Scottish National Gallery has just acquired a small preparatory sketch of this, which is on show.

It all sounds idyllic, but Saville and her partner Paul were often broke and struggling. “A painting of mine could sell at auction, flipped on, for a record price, but we had barely enough to buy milk.” In 1994/5 they went to America, to rural Connecticut. Her interest in plastic surgery was facilitated by visits to a New York surgeon’s operating theatre. She first spent time in the States in 1991, “when Jack Knox, then GSA Head of Painting got me a scholarship to the University of Cincinnati.” Their lectures on women’s studies caught her interest, which has stayed with her to this day.

Saville passion for flesh and for paint echoes de Kooning’s famous phrase: ‘Flesh was the reason why oil paint was invented.’ Art is her life. She lives and breathes painting. “I just love to paint. I can’t not paint.” She works every day, “even Christmas. Already I’m itching to get back to the studio.” 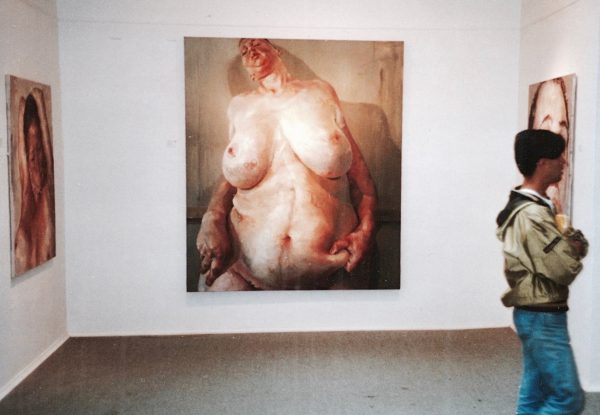 Saville herself is a joy: friendly, easy, kind, articulate, lovely. But her nudes are profoundly challenging: unflinching paintings of obese women’s bodies, never idealised, often painted close-up, on a massive scale. ‘Fulcrum’ is 16 ft long! And Christie’s described ‘Branded’ as “Looming over the viewer like a gargantuan fertility goddess.”

Much of her work has been fueled by an obsession with pathology, gruesome forensics, & the macabre. And the flesh can be raw, obese, bloody, ferocious, and sometimes involved transgender Hermaphrodite bodies – even the dead, their blue flesh decomposing on the mortuary slab. Yet such are their painterly qualities – most seductive the way she conveys the luminous bloom on stretched skin or free slashes of flecks, swirls or drips, that one can happily enjoy her abstract passages of virtuoso paint and their overall poetry, however paradoxical it seems.

When she won the £12,000 Lord Provost’s Prize in 1995. Saville told me, “People say, ‘You paint naked, don’t you?’ It’s not as straightforward as that – but somehow I’ve been incredibly lucky.” In fact, luck had nothing to do with – just incredibly hard slog and long working hours as she struggled to challenge the late 20th century’s tyranny of thinness. She is also very aware of the history of the male ‘gaze’, but as her subject is always female, plus she often paints herself or uses family as models, her work lacks the voyeuristic element inevitable with a male artist.

This Edinburgh show has, however, played safe. There is only one really violent, savage, horrific image – ‘Witness’, 2009, of a face with the mouth-blown away as if from an explosion or bomb, reflecting the reality of current war victims around the world.

Overall this show includes mostly less confrontational, well-known works, many from the early years, starting with 3 from her degree show including the wonderful ‘Propped’, exhibited just as it was at GSA reflected in an enormous mirror so you can read the words scratched in the paint, the nearest Saville ever got to conceptual art.

The large central gallery includes the gentle ‘Hyphen’ 1999, two ‘Stare’ portraits and the extraordinary huge vast overpowering masterpiece, Fulcrum, from 1998-99. This picture alone is worth a visit and tells everything about the level of ability, confidence, determination and ambition Saville had at age 29. 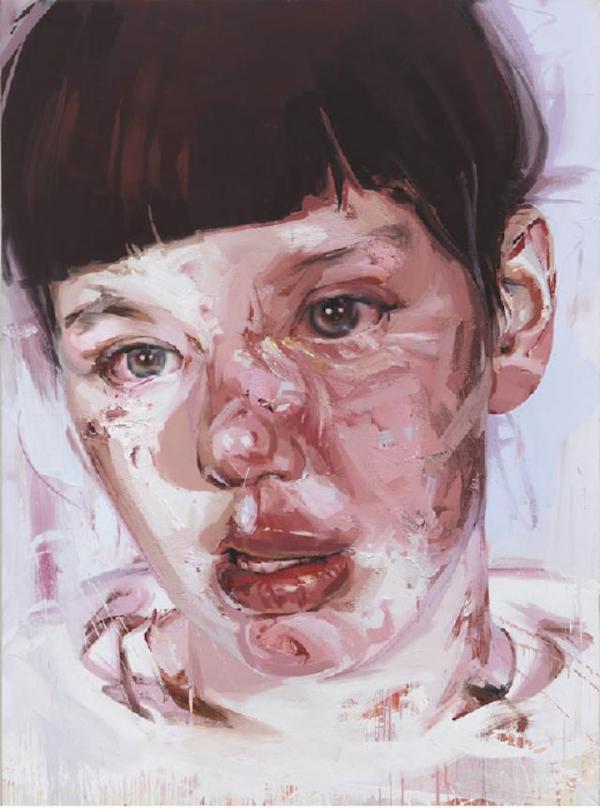 Next, come recent pastel and charcoal pieces created after the birth of her two children in 2007/8. (“No. No!! Having them within a year was NOT a plan!” she laughs). And yes, the change of medium was entirely practical, due to the kids. “I used to work strange hours and at first tried to fit the kids around me. Not good! So now I fit around them. And Paul is a wonderful father.”

Motherhood is a difficult subject for artists, easily becoming sentimental. All the more dangerous for someone like Saville. “It’s still such a problem to be a mum and be taken seriously. I could have put it to one side, not let it invade my work.” Till recently many of my generation had to hide the fact of our children. I know I did.

Saville has drawn many compositions of a mother holding two children on her knee, but translated, transformed, moving, shifting, slipping, overlapping, fluid, changing. “I drew hundreds, I couldn’t stop, they just poured out of me.” Like all women, the seriously professional Saville discovered the miracle of motherhood “changed everything. I had spent my life obsessed with flesh, and here I was actually growing flesh inside me. Incredible.”

I first saw her beautiful, loving mother and children drawings in New York in 2011. In Edinburgh in a brand new picture, this Madonna has been transported to Aleppo 2018 where the tragedy of childhood death and injury looms large.

One picture here, Bleach from 2008, has special significance. It’s a portrait of a drug addict on Crystal Meth whose face is covered in scabs. “But she had beautiful eyes, an intense, tender expression. I painted it while I was actually breastfeeding. I had this sheet over my overalls with two holes cut in so I could feed!! 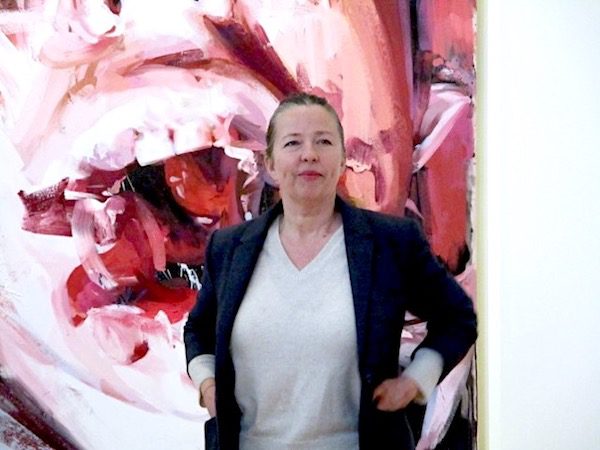 Olympia from 2014 is another stand-out picture. A black man (maybe her first male?) is wound around a white woman, set against a cityscape that could be Manhattan. Hands grope, legs, feet entwine. Knowing what marks to make, which brush, what gesture, and when to stop is vital here. Her next two compositions, Symposium, are more complex. Mostly monochrome pastel and charcoal, their multiple limbs, viewpoints and overlapping layers offer a gentle blending, motion and transparency. Figuration meets abstraction. And, significantly, here Saville’s work has quietened, become less fierce. Serene she never will be, but these latest work demonstrate a new departure where fluidity and perception of simultaneous realities come to the fore. All, as ever, based on her profound draughtsmanship learned in the life drawing classes at Glasgow School of Art.

Saville has always admired De Kooning, Bacon and Twombly, and their influences are visible in these recent works, and especially in Muse 2014, the most abstracted mass of breasts and loops, faces and bodies here. Long ago she told me, “It’s strange how the human eye is trained to read an image even if it’s concealed, obscured or out of focus.” How true now.

Her studio is a vital ingredient. From a vast Islington warehouse space where she experimented with perception, glass and mirrors in the 1990s, she moved to Palermo in 2003, to a Sicilian palazzo with huge rooms and wonderful light. But what was romantic became worrying once the babies arrived. “Bits of the roof were falling into the cot. One day I was in Oxford pushing a double buggy along a cobbled lane when I saw some great studio windows. We visited it that same night. Perfect. I never went back to Palermo!”

Her partner Paul McPhail, his family and her uncle, has always provided an impressive support system. “They have been amazing.” Indeed. Paul’s sister and mother both posed for Fulcrum and are proud of the part they played. His father made her original wooden trestle on wheels to reach the top of her giant canvases. She has been lucky here.

Saville set out to “try to be the best.” She is still trying, still working, still succeeding. I am sure; despite her fame and huge achievement, she will never stop.