The Turner Prize winning artist Jeremy Deller has launched a new campaign titled, ‘How to leave Facebook’. The campaign is in response to Facebook CEO Mark Zuckerberg admitted that it was a mistake to let Cambridge Analytica, a political data firm hired by Donald Trump’s 2016 election campaign. The exploitation of personal data of 50 million Facebook users were compromised in order to target US voters with political ads and influence the US election.

The london based multi-disciplinarian is giving away 2,000 posters explaining  Intervention is part of the Rapid Respond Unit project in Liverpool, which sees national and international artists, rather than professional journalists, acting as reporters and correspondents. Deller has created a new limited edition poster featuring a six-point set of instructions on how to delete accounts on the social media platform Facebook. 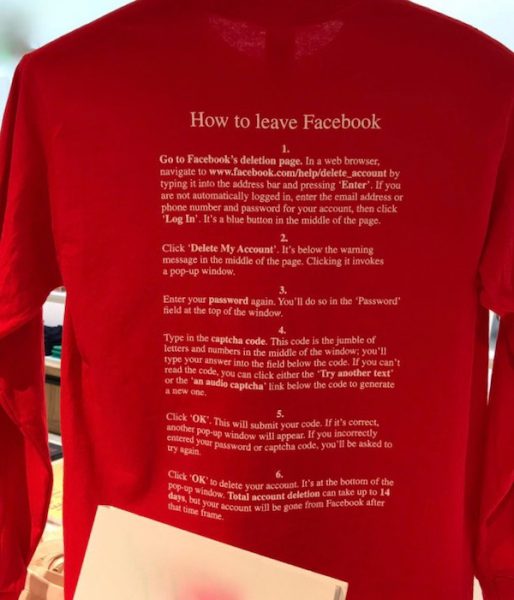 A thousand of the works have already been handed out at Euston Station, on Wednesday in London and at Facebook’s UK headquarters in Rathbone Place, London. Simultaneously, a further 1,000 were distributed at Lime Street Station, Liverpool.

A.N reported, “The intervention was part of the Rapid Respond Unit project in Liverpool which sees members of the public and artists, rather than professional journalists, acting as reporters and correspondents that respond to the live news agenda in real time. 20 collaborations will be commissioned by Culture Liverpool for the project over the next year.”

They said, “Deller’s work can be seen as a direct response to the Cambridge Analytica data mining scandal. An investigation by the Observer revealed that the personal data of around 50m Americans was harvested from Facebook and improperly shared, with the data analytics firm working with Donald Trump’s election team and the winning Brexit campaign.”

In response to the investigation, Facebook CEO Mark Zuckerberg has broken his silence on the scandal and announced Facebook will change how it shares data with third-party apps, admitting “we made mistakes” and that the policies that allowed the data to be misused were “a breach of trust between Facebook and the people who share their data with us and expect us to protect it”.

Deller has been involved in a poster campaigns over the past few years. In 2017, he secretly put up posters reading “Strong and stable my arse” ahead of the British elections. He uses the medium of posters because they’re “quick, cheap, and easy.”

Deller recently helped to relaunch the pioneering school prints project which brought contemporary art to children who would not otherwise have had the opportunity to see ‘good’ work. They went on display at The Hepworth Wakefield. Original lithographs were commissioned by Brenda Rawnsley in the 1940s as part of a programme. Rawnsley got some of the most influential British and European artists of the day, including L.S. Lowry, Henri Matisse, Henry Moore and Pablo Picasso to produce a portfolio of original works which were shown to students in schools across the UK.

London-based conceptual artist Jeremy Deller (English, born 1966) is known for orchestrating large-scale collaborative projects. In 2001, Deller worked with former miners and members of reenactment societies to restage a violent confrontation between the police and striking miners that had occurred in 1984 during the yearlong miners’ strike in the United Kingdom. For It Is What It Is, commissioned by The Three M Project and Creative Time in 2009, Deller toured the United States with a car destroyed in a 2007 bomb attack in Baghdad, inviting journalists, Iraqi refugees, soldiers, and scholars to share their experiences. He has developed several music projects including Acid Brass (1997), a brass band performance of acid house music. Winner of the 2004 Turner Prize, Deller represented Great Britain at the 55th Venice Biennale in 2013. His appreciation of academic drawing can be traced to his art history studies at the Courtauld Institute of Art and the University of Sussex.